Sudden infant death syndrome, commonly known as SIDS, is a heartbreaking loss that has largely been shrouded in mystery.

Twenty-nine years after losing her own baby to SIDS one mother has finally found the answers she’s spent a lifetime searching for.

In a groundbreaking study, Dr. Carmel Harrington (mother and lead researcher) along with a group of scientists at the Children’s Hospital Westmead in Sydney, have discovered exactly what causes SIDS.

And in doing so they hope to be able to prevent this terrible tragedy from happening to any other babies and their parents in the future.

The study is published in the June 2022 issue of The Lancet’s eBioMedicine journal.

SIDS, also known as crib death, is the sudden and unexpected death of a baby less than a year old. It happens with no warning and most often occurs while the child is sleeping.

It is a major cause of infant death in western countries and 3400 babies die each year in the United States.

For years doctors have believed that a combination of both physical and sleep environmental factors can make an infant more vulnerable to SIDS.

Back in 1994, the American Academy of Pediatrics launched its “Back To Sleep” campaign. Placing babies to sleep on their back up until their first birthday has largely been credited with significantly reducing the number of babies who die from SIDS.

While these are all important guidelines to follow, the medical community has long suspected that SIDS could be caused by a defect in the part of the brain that controls arousal from sleep and breathing.

According to the Mayo Clinic:

“Some infants are born with problems that make them more likely to die of SIDS.

In many of these babies, the portion of the brain that controls breathing and arousal from sleep hasn’t matured enough to work properly.”

The theory is that the defect prevents the baby from startling or waking up if they stop breathing while sleeping.

The Sydney researchers tested this theory by analyzing 722 dried blood samples collected as part of a newborn screening program.

Each SIDS sample was then compared with blood taken from healthy babies controlling for both dates of birth and gender.

What the scientists found was that an enzyme known as butyrylcholinesterase (BChE) was significantly lower in babies who died of SIDS compared to living infants and other non-SIDS infant deaths.

According to the Sydney Children’s Hospital Network, “BChE plays a major role in the brain’s arousal pathway.” It is what helps babies who are low on oxygen to wake up and cry.

A deficiency in the enzyme causes an arousal deficit which reduces the infant’s ability to wake up, resulting in SIDS.

This discovery finally puts Dr.Harrington’s own ordeal to rest.

The lawyer turned sleep expert, who has a Ph.D. in Sleep Medicine, lost her son Damien in 1991. She dedicated the next 29 years to finding out why.

She even financially supported much of her research through her crowd-funding campaign, Damien’s Legacy.

On her webpage, she explains what happened to Damien:

“Twenty-eight years ago, I was a lawyer, who used to be a research biochemist and a mother of 3 gorgeous children, when one night my beautiful healthy baby son, Damien, died suddenly and without warning.

I was told it was tragic and I was told to go home and enjoy my living babies and have more. I tried.”

She goes on to explain that 3 years later, she was faced with another tragic event that would dramatically change the course of her life.

“I tried so hard that one day 3 years later, when I was visiting my friend, I said nothing when I saw her baby, Amelia, sleeping on her tummy in the pram.

I did not respond to the screaming voice in my head to tell her to never sleep her baby on her tummy. I was trying to get on with my life, I did not want to upset her and so I said nothing.

The next morning, sitting in my office, overlooking the harbour, I got a phone call. Amelia had died in her sleep during the night.”

The next day she resigned from her job as a lawyer and swore she would solve the mystery of SIDS.

While the discovery doesn’t change what happened to Dr. Harrington’s son and countless other babies, it does provide some much-needed comfort to the parents left behind.

“These families can now live with the knowledge that this was not their fault.”

As for families in the future, this new knowledge could help detect babies more at risk of SIDS while they are alive, potentially saving thousands of babies per year. And in doing so, finally, make SIDS a thing of the past. 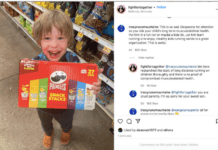 Anyone who has ever traveled with small children knows what a veritable shitshow it can be. Oftentimes it involves whining … Read More