I was rushing to take a shower this afternoon while my six-month-old was napping and before my four-year-old got home from preschool, and I noticed it.

One of my battle scars of motherhood — a big ole’ clump of hair in the shower drain.

It was long, dark brown woman’s hair, so it was only mine to claim as I’m the only female in my house. After my shower, I pulled it out and looked at horror at just how much was in the drain. There was a lot of hair.

I knew I’d been losing hair for some time, but I was shocked at how much was actually in the drain. I started noticing it about two weeks postpartum with my new baby boy. It was happening way more than normal. My husband found pieces on his work clothes, the baby had pieces of it in his hands, and my vacuum canister was filled with it.

I’ve always been a “shedder” as my husband calls me, but after Mr. C was born it hit a new level. So, when I got online and did a little research, and talked to fellow moms, it turns out it’s normal to lose a ton of hair after baby.

I hadn’t experienced this with my first pregnancy.

Some of the other moms told me you don’t lose any hair when you are pregnant. So after you have the baby you lose all of that hair plus your normal hair loss. I don’t know about all of that. I’m not a medical person, but it sounded about right.

The day before I found the hair in the drain, I went to the dentist and had two cavities filled. Now, let me back up. I’m that person that brushes their teeth 3-4 times a day. Before babies, I had maybe two cavities total in my life.

However, after I went through my first pregnancy with Mr. L, I came out the other end with six cavities that needed to be filled. SIX. So, when I was pregnant with Mr. C, I vowed I wouldn’t get any more cavities.

I was vigilant about brushing (even more so). I flossed (even more so) and added a cavity rinse to my regimen. When the doc told me I had two small cavities at my first postpartum dental exam, I was devastated.

Now I had the hair loss, the cavities, and every day before I get dressed I’m reminded of the road map that now exists on my lower stomach in the form of stretch marks. Of course we can’t forget the 5-inch scar across my upper pelvic region from which they were both cut and pulled out. 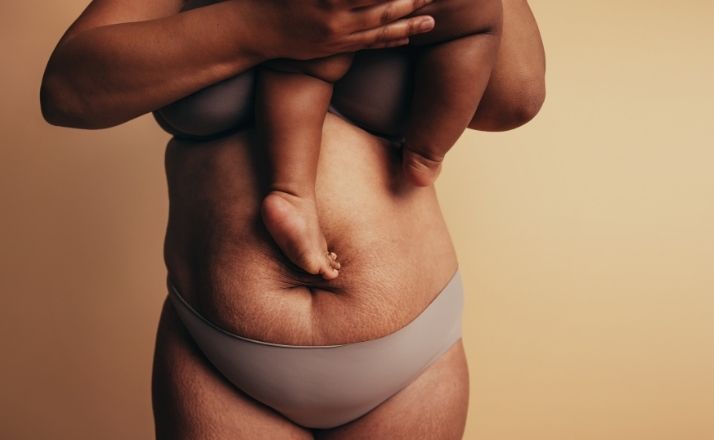 They definitely both left their mark on my midsection. They’ve done a number on my body (and mind). These scars of motherhood are a surprise we didn’t see coming.

My body isn’t what it used to be. My hair isn’t as luscious as it once was. And my teeth aren’t quite as healthy as they formerly were.

But as I pulled that clump of my own hair out of the shower drain I realized something. My hair will eventually grow back, maybe not to the fullness it was before I had my babies, but it will become full again.

My teeth will probably get worked on again before I enter the dentures phase of life, no matter how much I brush and floss. And my stomach bears the scars of motherhood.

Each mark tells the story of the boy that pushed on my stomach from the inside out, month after month as he grew and grew into the baby I’d find my reason for living for — two times over.

That 5-inch scar provided a safe portal for my eldest to pass through my womb into the world since he decided never to turn while inside of it. His little brother followed the open door already created by his big brother.

I may have days where I feel like I give so much of myself to my children. Whether it be my hair, my body, and heck even my sanity. There are still days I look in the mirror and don’t recognize the woman standing in front of it.

And there are times I miss the body I had when I was 19 years old.

Those days are few and far between now. They are put in the back of my mind as I look at my four-year-old, who is the miniature male version of me, write his name at the kitchen table.

Or as my six-month-old plays in his exersaucer and his big blue eyes follow me as I carry a load of laundry upstairs. And then as he cries because I’m the center of his entire world and when I’m out of sight he thinks I’m gone forever.

They are worth it.

Every cavity I have to get filled (even if not all of them are their fault). Every stretch mark I will continue to cover with scar cream probably until the day I die. And every piece of hair I find in the shower sink. These are my scars of motherhood.

And they are so, so worth it.

This post originally appeared on Her View From Home.

Sexual Use of Eggplant And Pea…

Social media is great. It gives people the opportunity to connect, share snippets of their lives, and mindlessly lose themselves … Read More