Traveling can be a stressful experience even under the best of circumstances. But when you’re a new mom the stress is often ramped up by about a thousand, give or take.

Whether you’re traveling with your baby or not, there are certain logistics that need to be taken into account, particularly when it comes to breastfeeding.

As any breastfeeding mama knows, maintaining a schedule is vital to keeping up your supply and preventing painfully engorged breasts and possible mastitis.

Oftentimes, traveling moms need to pump before, or during a flight, regardless of whether or not their baby is with them.

While the TSA rules specifically state that “You do not need to travel with your child to bring breast milk,” it seems that saying it and doing it are two very different things.

Emily’s Wonder Lab star and mother of two, Emily Calandrelli recently shared her “humiliating” breastfeeding experience at LAX and it’s struck a chord with thousands of women who have been through the same damn thing.

Callendrelli is the mother of a 10-week-old and a toddler. She was on her first trip away from her baby.

Planning to get in a pumping session before her 5-hour flight from Los Angeles to Washington, she brought her breast pump and 2 ice packs with her.

One gel ice pack was cold. The other was not.

And therein lay the problem, apparently.

Two male TSA agents refused to let Calandrelli bring the ice packs through security because they both weren’t frozen.

After initially sharing her experience on her social channels, Calandrelli deleted her posts, feeling embarrassed and anxious about the confrontation.

She later changed her mind and reposted it. And women everywhere are so glad she did.

The posts have collectively garnered over 90K likes, 6K comments, and 9K shares across Twitter, IG, and Facebook.

Yesterday I took down my posts about how @TSA treated me at @flyLAXairport. I was embarrassed at how emotional I was. I was anxious about the confrontation. So I deleted it.

But they make too many mothers feel this way, so I’m going to talk about it bc this needs to stop ? pic.twitter.com/MIZchi8M6k

“Yesterday was my 1st trip away from my 10wk old son, who I’m currently breastfeeding. I’m going through security at LAX. I brought my pump and 2 ice packs – only 1 of which was cold (I won’t need the other until I come home, when I’ll have more milk).”

She explained that she didn’t currently have milk on-hand but was planning to pump right before boarding her flight. It was then that two male TSA agents told Calandrelli that she couldn’t bring her ice packs through security because they weren’t frozen solid.

However, this wasn’t her first rodeo. According to Business Insider, she had traveled multiple times with her firstborn and would run into the same issue but TSA agents always let her and her ice packs through.

But not this time.

“I asked to speak to someone else & they had their boss come over & he told me the same.

He said “if you had milk on you, this wouldn’t be a problem.”

sir I’m ABOUT TO

He said (*multiple times*) “well WHERE is the baby.” He said if my child was with me, it wouldn’t be an issue.”

She was literally about to pump. You do not need to travel with your child to bring breast milk. So why is this an issue exactly?? Please. Do explain.

Calandrelli requested to speak to a female agent multiple times. Her requests were denied.

“They escorted me out of line and forced me to check my cold packs, meaning I couldn’t pump before my flight for fear it would spoil.”

To make matters even worse, because their actions weren’t already bad enough, apparently, one TSA Agent said, “and don’t try to sneak it back through a second time, we’ll just make you toss it out.”: 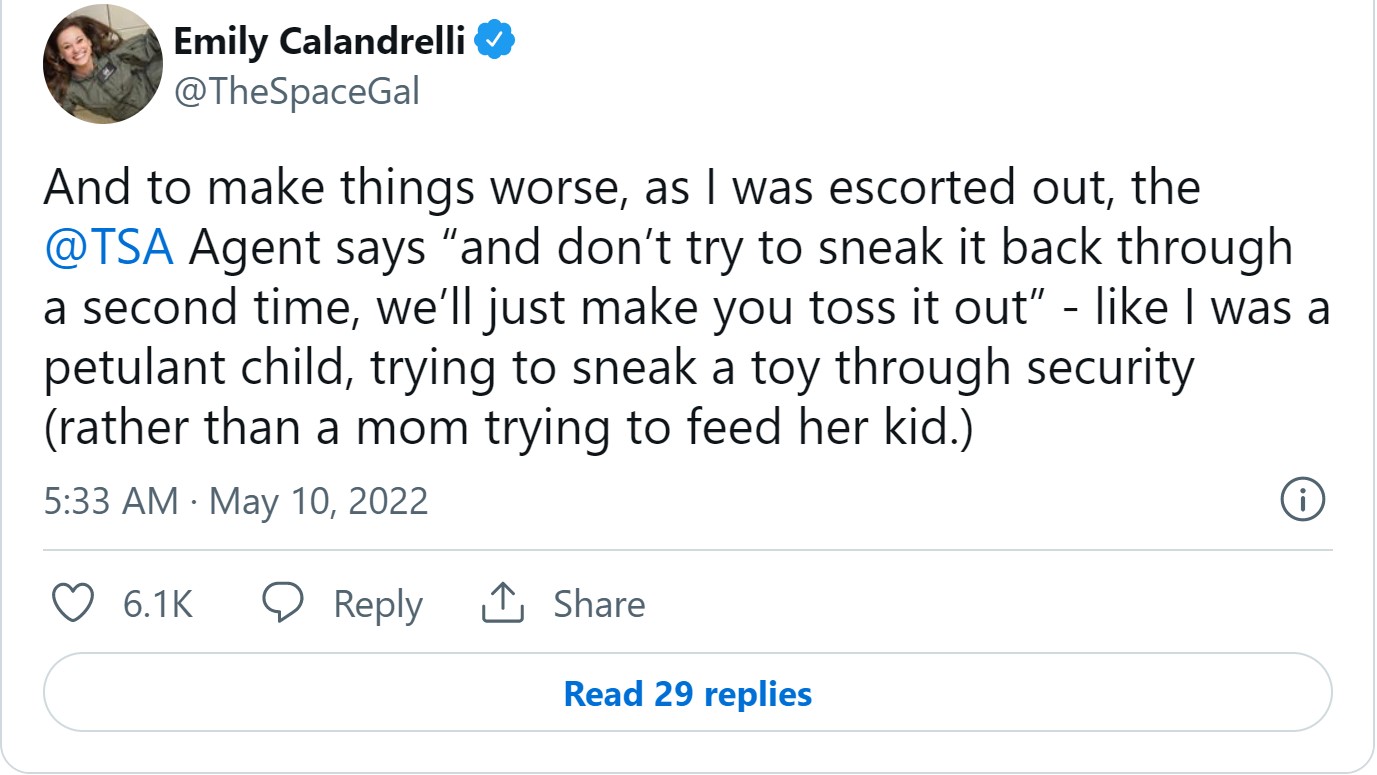 Embarrassed about having to explain breastfeeding to 3 grown men, she admits that she cried in the airport.

But here’s the thing. SHE DID NOTHING WRONG.

Rather, the TSA agents were wrong.

TSA rules specifically state that you are allowed to have gel ice packs (regardless if they are fully frozen!!) for medically necessary purposes.

“And emptying my breasts on a regular schedule & providing food for my child IS medically necessary (& especially crucial with the current formula shortage!)”

Sadly, but not surprisingly, women came out in droves to share their own familiar horror stories.

Yesterday I was humiliated that I had to explain to 3 grown men that my breasts still produce milk when I’m not with my child. Yesterday I was embarrassed telling them about my fear of mastitis if I didn’t pump. Today I’m furious. @TSA

We’re all furious. TSA has made so many mothers feel horrible.

One mom recounted having to throw away three full 8-oz bottles of “liquid gold.” Her daughter cried the entire flight:

And it’s not just breast milk that seems to be an issue. Premade formula is as well:

Another commenter pointed out that moms don’t WANT to pump in the middle of the airport but we do it because we HAVE to. For our babies. And ourselves.

TSA is currently reviewing the incident.

In a statement shared with Good Morning America, an agency spokeswoman said:

“We take all traveler concerns about our security checkpoint screening processes seriously and are committed to ensuring that every traveler is treated respectfully and courteously.

We will look into all circumstances involving this situation and address it appropriately.”

In addition, TSA is looking at possibly implementing additional training or screening processes depending on the outcome of the investigation.

Regardless of what they find, the reality is this: what happened to Callandrelli is NOT an isolated event. It’s obvious that changes have to be made. No mother should ever be penalized for doing what she has to in order to provide for the well-being of her child and herself. Full stop. 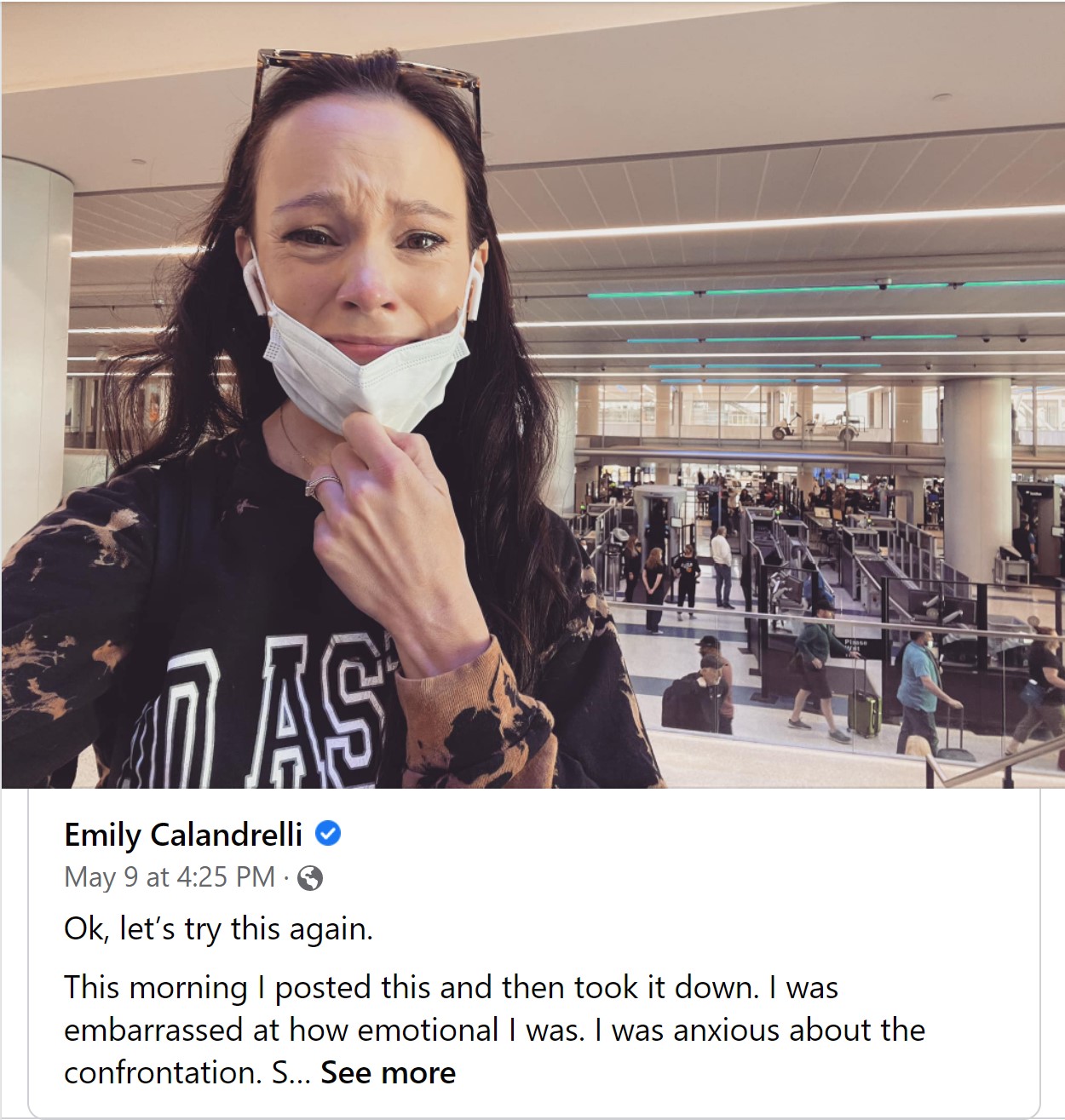 To this day, my parents still don’t know that I skinned my knee and broke my baby toe after jumping … Read More