As I sit at the computer thinking of how to put into words to explain how my son has an anxious mother, my anxiety rises. I think of who will read this and what will they think of me. Will they skip to the end to see how it ends? Will they empathize me? Will they pity me? Or will they think I’m unfit to be a mother if I have so much anxiety? What will they think of me? I talk myself out of it and encourage myself to keep writing because it’s OK. Because hundreds if not thousands of mothers have anxiety.

I’ve lived with anxiety (and depression) for over 22 years and have learned to cope with it the best I can. Sometimes it’s physically painful, and other times it just sits there like an annoying stain you can’t remove from your favorite shirt. I had my son two years ago, and I’d like to say it was the best time of my life, but it wasn’t. He was perfect in every way, but my anxiety had other plans, and so began round I-lost-count of dealing with consistent and persistent anxiety.

I joined two mommy-and-me classes where I met some great ladies and their children. That was two days a week. It was lovely. I thought it was great. We were getting out of the house, meeting people in the area and discovering other moms too were new to the area. We sang songs and laughed and learned. But my son wasn’t growing as other babies were. Or was he? The group leader at the Early Years Centre where the groups were held kept reminding me that he was fine and not to compare.

Not compare? Me? Obviously she didn’t know me too well.

I was anxious about anything and everything.

During that time, my son was napping for 20 minutes at a time while other women’s babies were napping for two hours. Something is wrong with my son! My son had a flat head, but, as the physiotherapist told me, he was fine and it wasn’t a condition. He just had a flatter head (my husband too has a flatter head at the back). My son wasn’t crawling yet. What have I done?

Younger babies were crawling; same-age babies were crawling. But not my son. I lived in constant fear that he wasn’t reaching his potential and that it was all my fault. I’m a terrible mother. I’m doing something wrong. I took many vitamins. I didn’t take enough vitamins. Why won’t this voice leave me alone?

Everyone kept reminding me, including my doctor, that he was fine. Not all babies crawl at 6 or 8 months. My son didn’t crawl until after his first birthday and didn’t walk on his own until he was 17 months. He just had a good time observing everything around him and wasn’t thinking “wow, my mom sure is anxious about me, I should probably get on my feet already.”

Now add all that to the fact that I wear hearing aids. What if I can’t hear him? What if he falls and I don’t hear? What if he cried I can’t hear? The anxiety related to having a hearing disability really puts the icing and cherry on that cake. I have always been OK with having hearing aids (not really always, but I’ve managed) but having a child and worrying that I won’t hear him because of my disability is frightening.

We use a video monitor, and it’s my best friend. But sometimes the power goes out and I forget to turn it on in his room and ah! I can’t see him! Is he OK? My husband reminds me that he can hear, and yes, the boy is just fine. Quiet equals sleeping, right?

There were times I couldn’t calm my baby and was bitter at my husband for “doing it better than I could.” He wasn’t doing anything different than I was, except that he wasn’t anxious. My son fed off me like I feed off others. I was nervous, he was nervous. I was anxious, he was anxious. I couldn’t get it right. I battled with the thought that I am ruining our child.

My son is now 2 years old, and my anxiety about him has never left. It’s always something else. He isn’t eating enough. He’s too short. His hair took too long to grow in. He isn’t eating dinner, again. At dinner time, I will leave the table and my son will eat his dinner with his dad because his anxious mother is finally out of the room. She isn’t hovering over him, forcing a spoon in his mouth, asking him if he’s hungry and ignoring his response of “No.” No wasn’t an option. He was lying. He has to be hungry. Why isn’t he eating as much as he did yesterday?

My poor child. My anxiety is a battle for us, and it’s something I’m constantly trying to get a grip of. The time will come where I will need to sit him down and explain mommy’s anxiety and mental health issues, and I am not looking forward to that. How do I tell him? How do I explain that mommy isn’t superwoman, but an anxious mess?

Mommy is a superwoman, like all mothers who want only the best for the child and do everything for them to ensure they reach their potential. Mommy is someone who will love that boy more than anyone else in the world. We do our bests day in and day out, and we aren’t perfect.

I’ll never be perfect, but I’ll never stop trying to be a role model for my son. I worry he will inherit my anxiety. I think about how to explain the feelings to him and how to teach him coping mechanisms, but then I reign it in… let’s cross that bridge when we get to it. My son is not an anxious boy; he is a busy boy.

A healthy, curious, inquisitive, intelligent, typical 2-year-old boy who has maddening temper tantrums one second and is laughing the next. Deep breath, mama! You’re doing great! I often have to remind myself of that. He is fed, clothed, and has a roof over his head. He is happy. Why am I worried if he is happy? Because anxiety doesn’t care. It is there, lurking over your shoulder like a creepy old lady at the slots waiting for your machine to cash so she can cash in.

At the end of the day, I put my kid to bed and turn on the monitor so I can see him sleeping, and I’m content (for the time being). My son has an anxious mother, but I’ll be damned if I let that define the kind of mother I truly am.

Karen Szabo is a part-time worker by day, boy-mom by night, and blogger at www.theantsybutterfly.com any time in between. She’s doing her best to keep her sanity by writing about being an anxious mom. She’s a contributor for The Mighty and has written for Sunshine Spoils Milk, Sammiches & Psych Meds, Parent Co., and Mamapedia. Karen can be found on Twitter @AntsyButterfly and Facebook. 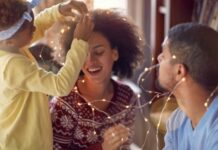 5 Ways To Commit To A Stress-Free Holiday Season 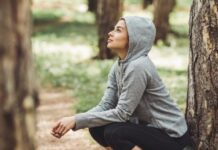 You’re Stronger Than You Think You Are (Even With Depression) 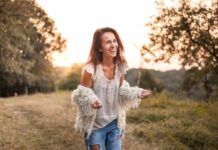 I’m A Different Woman On The Other Side of 40; One That Doesn’t Take Sh*t From Anyone


There’s A Birthie Stick That …

Survey Shows Half of Men Say They D…