You know, there have been a lot of headlines lately that have made me scrunch up my brow and mutter, “WTF!?” under my breath, but this one might take the cake.

A family is making headlines for allowing their six-year-old child to run a full marathon. That’s 26.2 miles.

And as you can imagine, the internet has a thing or two to say about it.

Kami and Ben Crawford signed up their family of six kids to run the full marathon called the Flying Pig Marathon in Cincinnati.

The family team ran the entire course and finished the race, including six-year-old Rainer Crawford, in 8 hours and 35 minutes.

Apparently, to celebrate, they posted an image of Rainer on Instagram looking excited as he holds a package of Pringles chips.

The caption is a confusing mesh of what appears to be pride…and maybe bribery?

“On the marathon course, Rainier knew they usually hand out Pringles around mile 20.

He was struggling physically and wanted to take a break and sit every three minutes. After 7 hours, we finally got to mile 20 and only to find an abandoned table and empty boxes.

He was crying and we were moving slow so I told him I’d buy him two sleeves if he kept moving. I had to promise him another sleeve to get him in the family pic at the finish line.

As you can imagine, there has been plenty of uproar over letting a child of this age run a marathon. 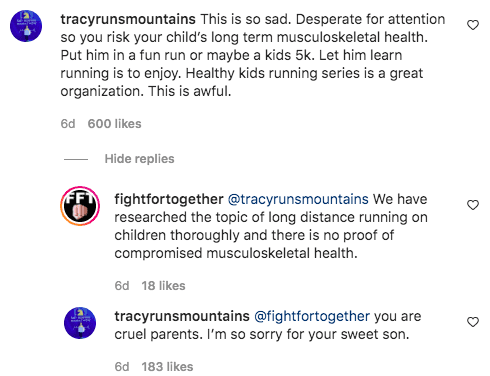 “This is so sad. Desperate for attention so you risk your child’s long-term musculoskeletal health. Put him in a fun run or maybe a kids 5k. Let him learn running is to enjoy. Healthy kids running series is a great organization. This is awful.”

That comment received hundreds of likes and attracted a bit of an argument in response.

@fightfortogether, the Crawford family Instagram account, replied, “@tracyrunsmountains We have researched the topic of long distance running on children thoroughly and there is no proof of compromised musculoskeletal health.”

But the family’s response did not pass muster.

Immediately, others chimed in noting that there is a lack of research that supports a child as young as six running a marathon because it’s not a fabulous idea.

Typically, kids under 16 are not allowed to run a full-length marathon because of health concerns.

But as the National Library of Medicine points out, there is very little data on young runners period.

They note that young children should be allowed to participate in training “as long as their social, academic, psychological, and psychological development is not disrupted.”

Furthermore, they say that more studies need to be done before anyone can say just how dangerous running a marathon can be for a still-developing body.

Kara Goucher, a celebrated American long-distance runner, and Olympic medalist waded into the fray and posted her hot take on Twitter. 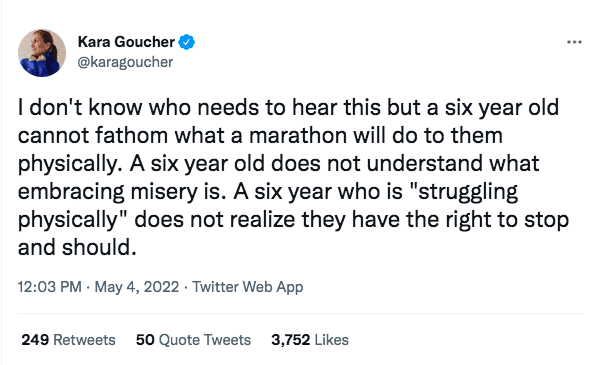 “I don’t know who needs to hear this but a six-year-old cannot fathom what a marathon will do to them physically,” her post reads.

“A six-year-old does not understand what embracing misery is. A six-year-old who is “struggling physically” does not realize they have the right to stop and should.”

The Crawford’s daughter, Memory, took issue with the public Tweet and shot back on Instagram defending her parents to allow her little brother to run the marathon. 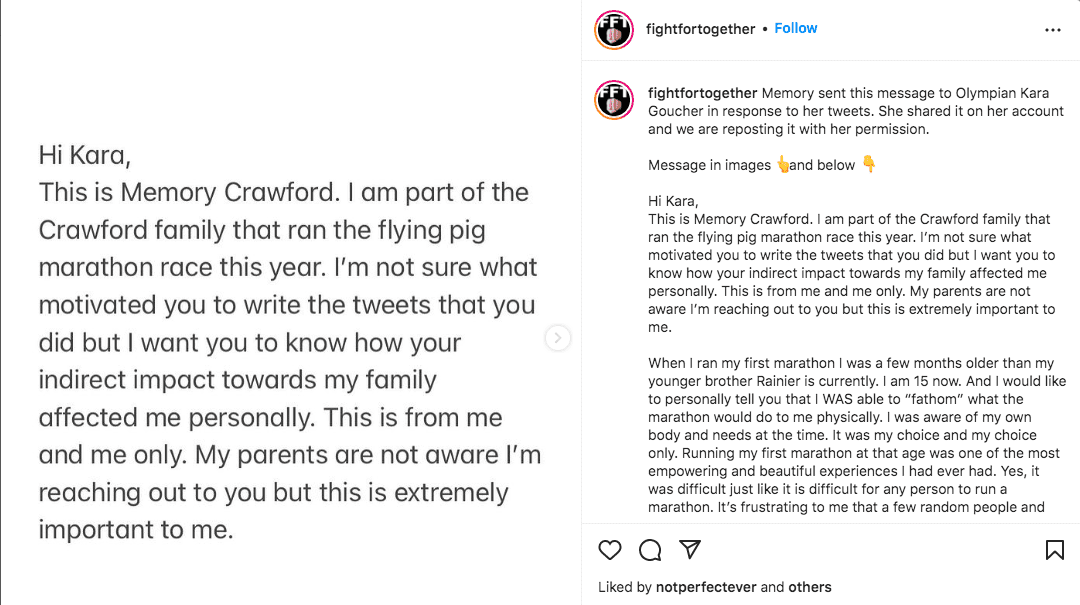 “When I ran my first marathon I was a few months older than my younger brother Rainier is currently. I am 15 now. And I would like to personally tell you that I WAS able to ‘fathom’ what the marathon would do to me physically. I was aware of my own body and needs at the time. It was my choice and my choice only. Running my first marathon at that age was one of the most empowering and beautiful experiences I had ever had,” her letter read in part.

Still, the outcry that these parents are cruel and foolish for allowing their child to participate in a race that is so punishing on the human body has not stopped the criticism from coming.

The Crawfords have created a Google Doc to answer uncomfortable questions regarding their unorthodox parenting style, and they address some of the bluntest charges against them: namely that by allowing their kid to run a marathon they are abusing their kid.
“Child Protective Services (CPS) arrived at our house unannounced and interviewed our children, parents, and grandmother five days after the marathon. This was a scary process because usually children are interrogated away from parents, against their will, and their answers determine the agency’s legal right to take away the kids,” The Crawfords wrote. 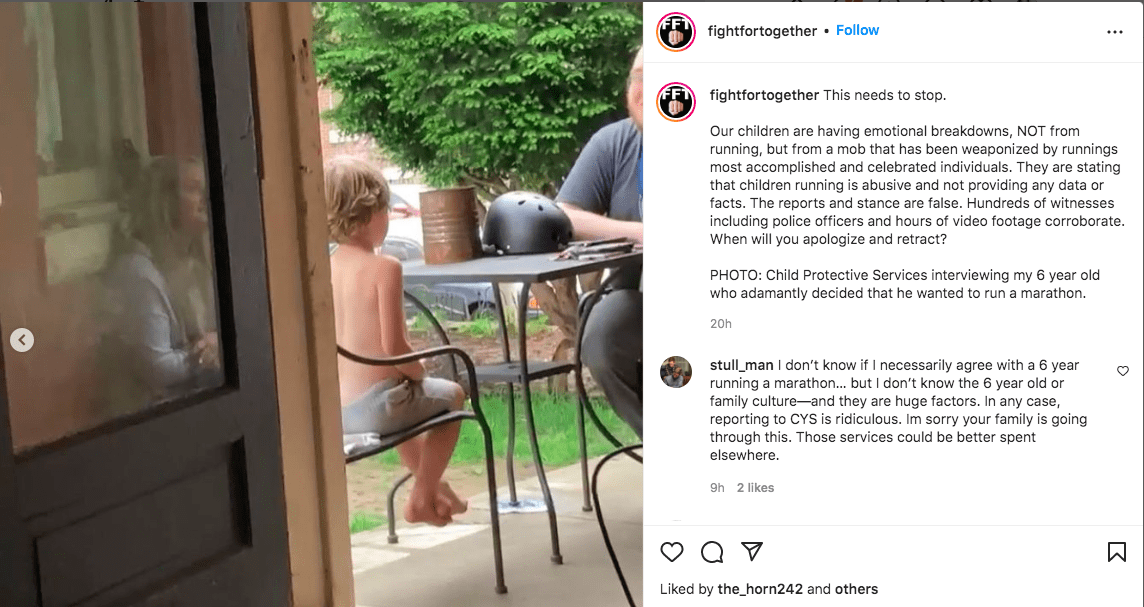 They claim that there were six complaints of abuse lodged against them, which triggered the CPS investigation.
Someone allegedly falsely claimed that the parents “dragged Rainer after mile 13 and across the finish line,” however after hours of interviews that included watching video footage of the race, no such incident occurred.

It may be one thing to think these parents are making ridiculous choices for their kids, but perhaps calling CPS is a bit of an overreaction.

There are kids in far worse conditions, facing horrific, unimaginable abuse who need CPS much more than this family does.
Iris Simpson Bush, the lead organizer of The Flying Pig Marathon has publicly responded to the backlash and posted a letter to explain why they allowed a child of six to participate.
“This decision was not made lightly. The father was determined to do the race with his young child regardless,” the letter reads. “They had done it as bandits, in prior years, before we had any knowledge of it and we knew he was likely to do so again.”
According to that public statement by the Flying Pig Marathon organizers, the Crawfords willfully broke the marathon rules to include their child and were forced to change their rules in an effort to try and make sure that emergency medical services could be available to the young boy if anything went sideways.
Moving forward, the letter states, the organizers will adhere to a strict 18+ age requirement to participate.
The family appears to be aggressively defending their choices and actions despite the public backlash. You can follow the discussion as it continues to unfold over on Instagram.