To say I watched it is a stretch, I suppose. Perhaps a better term is glanced at it. Is that better? Glanced is a pretty soft word. What happened was more like I looked, got weak at the knees, a little nauseous, and then had to look away.

Mel and I have three children, and all of them came via cesarean. None of them were easy.

The only birth I actually witnessed was the first, and the doctor had to trick me into it. But trust me, I watched the pain she endured.

I didn’t actually know what a cesarean was when my son was born 12 years ago. I was 24 and the plan was to have a natural birth.

I’d seen videos of that, and had a pretty good idea what to expect. Not that I had any intentions of looking. I’m not one for blood or guts or babies being pushed out of vaginas. I hope we can still be friends.

Two weeks before our son’s due date Mel’s hands, feet, neck, all of her swelled up suddenly. She met with her doctor about it, he told her she had toxemia, and that the baby needed to be delivered via cesarean.

I went into the procedure innocently, wrapped in scrubs and booties, and about 20 minutes in I heard a baby cry and the doctor said, “Daddy, come see your son.” 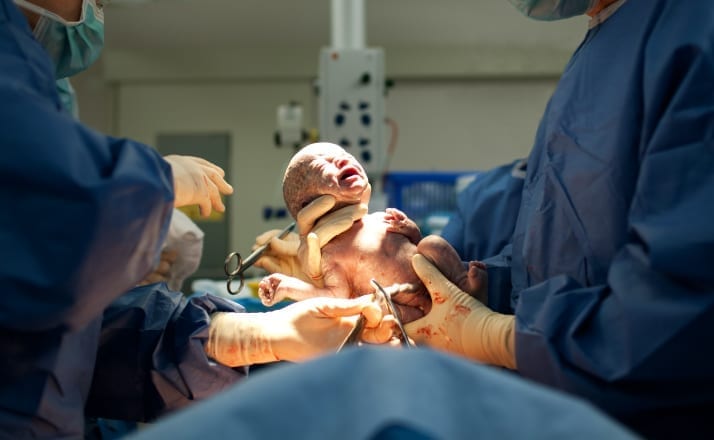 I’d been holding Mel’s hand, focusing on her, not looking at the business end of things. I had no intention of looking, but considering this was my first time, I assumed they were done. I stood and looked. Tristan head and one arm were reaching out from a gaping wound in my wife’s abdomen.

He was screaming and flexing, all red, white, and blue.

People talk a lot about the miracle of birth, but the act of, the actual moment, was the worst thing I’d ever seen.

I sat down, nauseous and weak, and Mel smiled at me, her eyes glossy from the epidural; her face calm.

“You don’t want to know what they’re doing to you,” I said.

It was only after the birth of our son, after Mel’s stitches bled for weeks each time she sat up, after each time she laughed or coughed or anything like it, she had to hold her stomach, after she went back to work with gauze still strapped across her stomach, that I started to notice people mention their feelings that cesareans were the easy way out.

It was mostly on social media. No one ever said it to my face.

In fact, I still see it. I’ll be scrolling through Facebook and see some backhanded comment “lucky you got to have a cesarean. We did ours natural…” Or something like, “It must have been nice to have a cesarean. I hope you enjoy the extra time off.”

Sometimes it’s a more direct implication that cesareans are easy with comments like, “I actually had to push my children out…”

Now listen, I cannot speak for natural birth, but what I can say, with 100% sincerity, is that there’s nothing easy about a cesarean.

After that first childbirth, I was honestly afraid my wife wasn’t going to make it. I’d never seen anything like what she endured. I’d never seen a cut that big in real life, let alone having doctors reach inside and pull a 7-pound human out of it. It was so gruesome I couldn’t even look.

With our third child, air got into Mel’s body and settled in her shoulders.

While I know this doesn’t sound like much, it’s actually very painful. She cried all night, with one hand on her shoulder, and the other across her abdomen. Each breath was painful, and yet she couldn’t stop crying.

She asked for more pain medication, and the nurse told her she was maxed out. The whole time I stood over here, holding our new daughter, feeling helpless, and wondering if my wife was having a heart attack.

Regardless of how a child is brought into the world, it’s a difficult ordeal. No childbirth is easy.

It’s a strain on the mother’s body, and it takes months of recovery. I’m not even going to try and say that one form or childbirth is better or worse. I’m not going to comment on the over use of cesarean.

Because honestly, people: This isn’t a competition. It’s childbirth.

It’s bringing a new person into the world, and nothing is easy about it.

Across Mel’s abdomen is a lengthy scar. It’s larger than any scar I have, and even if I do get a scar that equals hers, it will never signify as much importance.

Her scar is evidence of dedication and determination to our family.

It’s evidence of her willingness to do whatever it takes to bring our children into the world — a boy and two girls that fill my life with more joy than I ever thought possible. And every time I see it, I am filled with a swell of admiration for the mother of my children because I know what she went through to get it. And it was anything but the easy way out.

How Do You Deal With Unsolicited Advice During Pregnancy? Don’t Accept Rude Behavior.