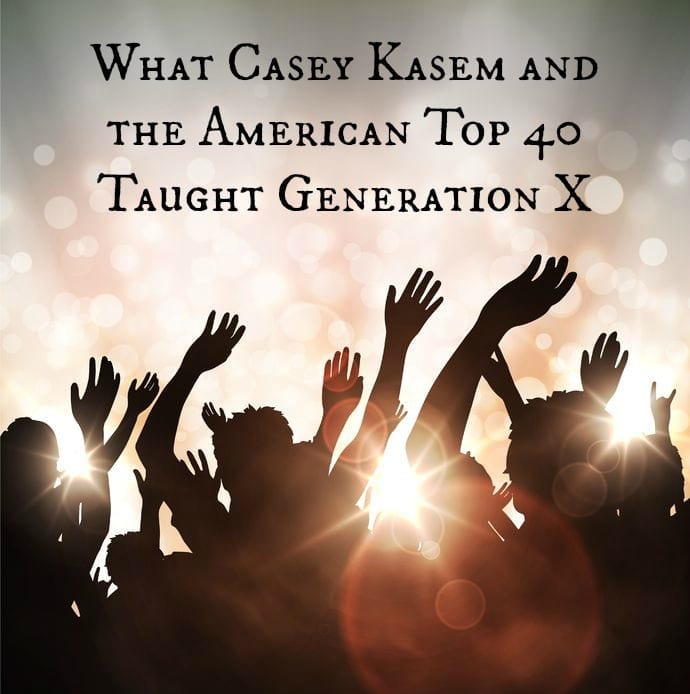 In the eighties, I never missed the American Top 40. Each Sunday I’d eagerly wait for the countdown; a blank cassette tape on hand to record my favorite songs. When Casey Kasem’s voice came over the airwaves, “This is Casey Kasem in Hollywood, and in the next three hours, we’ll count down the 40 most popular hits in the United States…,” I’d grab the nearest hairbrush and turn into a lip-synching diva.

It sounds cliché, but Kasem’s energy was infectious. It didn’t matter if my blue eye shadow had gone missing or if Whitesnake had suddenly announced their retirement, after listening to his show I could conquer mountains. Those mountains were more like mole hills at the time, but his enthusiasm stayed with me.

As a young woman growing up in a time when tremendous social and economic change was taking place, Kasem had a profound effect on how I viewed important issues and interpreted the world around me. I didn’t realize it back then, but each week he taught us valuable life lessons through his role as a well-known on-air personality. He was more than a voice, he was a mentor.

For example, he urged us to keep our feet on the ground, but to keep reaching for the stars. This message resonated as the eighties produced a generation of entrepreneurs, idealists, and progressive thinkers. To this day, Gen Xers are not afraid to aim high, while maintaining a sense of reality.

He encouraged a strong work ethic. Beginning on Independence Day in 1970, Kasem counted down America’s “hits from coast to coast.” There were no sick days or slacking off. He had a job to do—entertaining the masses—and he did his job faithfully week after week.

He demonstrated through example that it’s important to stay true to you. Kasem rarely, if ever, strayed from his values. He passed on opportunities that did not reflect his core message or beliefs, including a Cheerios commercial that was not a brand he would ever feed his kids.

He willed us to help our neighbors. Kasem was a philanthropist; a vegan who supported animal rights and environmental causes.  He was often visible at local charitable events, including softball games and birthdays.

He taught us that it’s okay to feel the music … that songs are more than carefully orchestrated words and perfectly pieced together notes. Music taps into the innermost region of our souls. The melodies evoke deep emotions that transcend past pages of written words and funky symbols. Music tells stories, instills hope, and inspires.

Kasem had a way of persuading a generation of kids to say the things that mattered, to honor and remember those we love, and, most importantly, to live … to treat each new day like there really was no tomorrow.

And now, for a long-distance dedication. We love you, Casey. Rest in peace.