Yoga has been around for thousands of years and it’s no secret that it has proven mental, spiritual, and physical health benefits.

And while the benefits are plenty, not everyone is a fan.

Some people view yoga as a gateway to Satan himself and believe he will use any tool necessary to claim the souls of our children.

Self-described “speaker, singer, author, worshipper, musician” Yasmeen Suri took to her Facebook page with a dire warning to parents about the devil incarnate, aka ‘Yoga Barbie,’ who will possess your children if you don’t rid them of this “demonic attachment.”

Also, we seriously can’t make this shit up.

“”Yoga Barbie” is at Target on the shelf. Satan always comes as appearing innocent. He will never come with horns and a pitchfork.”

Rather, he will come in the form of a popular plastic fashion doll, driving a pink convertible, probably.

As for the cost of selling your child’s soul to eternal damnation? A mere $24.99. Available at Target, Amazon, and fine retailers near you.

According to Mattel’s description, “Breathe With Me Barbie” is a “meditation-themed doll” that “celebrates one of her favorite ways to recharge using lights and sound — mindfulness meditation.”

She is part of a wellness set that includes the Barbie doll, a puppy, and four cloud emojis.

Additionally, the Barbie doll comes with 5 guided meditations and you know what that means…okay, actually I didn’t know, but I do now.

Thanks be to Suri.

“This Barbie has 5 guided meditations. Remember, Yoga IS Hinduism. You cannot separate the poses from the religion. Each pose is designed to invoke a hindu deity in the spirit realm.

I have seen children get possessed by demons.”

Not only will Yoga Barbie make your child invoke a Hindu deity AND be possessed by a demon, but she will also teach your child…DEEP BREATHING.

To make matters even worse, her pet is also involved. Is he named Cujo, perchance?

“This Barbie also teaches you deep breathing(pranayama). Her pet is also involved.”

In case you think Suri’s kidding, or this is some next-level satire, it’s not.

Neither can we, Megan, neither.can.we.

However, lest you think her sermon is over, Suri’s just warming up. This is serious business.

She continues her rant saying,

“Satan is after the children. He wants to use them and indoctrinate them for his glory. Then, when he is done, he will destroy them.

As your kids grow, they will get rebellious, depressed and many will be suicidal. You won’t understand what’s happening as a parent.”

But Suri understands. And Yoga Barbie is to blame, obviously.

Satan is going to use yoga and Barbie and Barbie’s pet dog to make your children rebellious, depressed, and even suicidal.

However, fear not, for there is hope.

“You must remove all toys and clean your children’s room of all demonic attachments. Deuteronomy 18:10-12”

I’m no Bible expert, but I’m pretty certain that Deuteronomy 18:10-12 doesn’t actually say any of this.

While the post itself rains hellfire and brimstone, it’s in the comment section where the true roasting takes place.

Over 48K people were stirred by Suri’s message.

And scripture was recited. 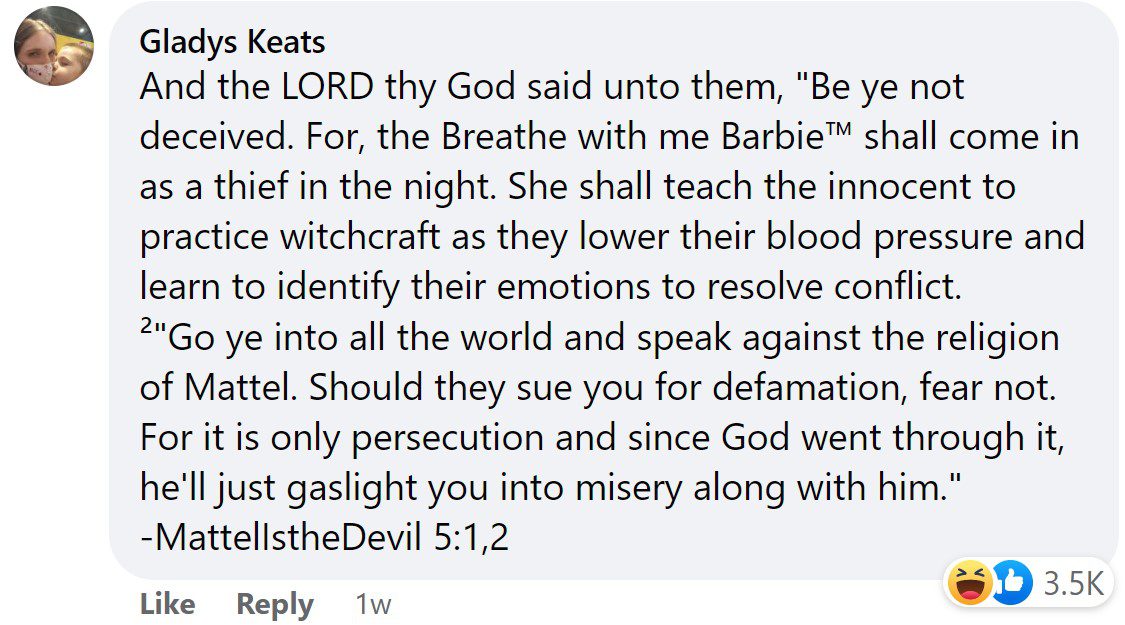 “And the LORD thy God said unto them, “Be ye not deceived. For, the Breathe with me Barbie™ shall come in as a thief in the night. She shall teach the innocent to practice witchcraft as they lower their blood pressure and learn to identify their emotions to resolve conflict.

²”Go ye into all the world and speak against the religion of Mattel. Should they sue you for defamation, fear not. For it is only persecution and since God went through it, he’ll just gaslight you into misery along with him.”

(This is the word according to MattelIsTheDevil.)

As with all Bible teachings, this one was open to interpretation.

Namely, exactly what is meant by “demon attachments.”

Speaking of children, people came forth to share their testimonies.

From the newly indoctrinated…like Trudie’s daughter…

They say patience is a virtue.

And then, of course, there was this guy, who clearly, had a lot to say about the post. Most of which can be summed up in his final parting blow,

“In fact, an unplanned bowel movement during a downward dog pose would carry more value than the overall content of this post.”

And all of the people said, “Amen.” 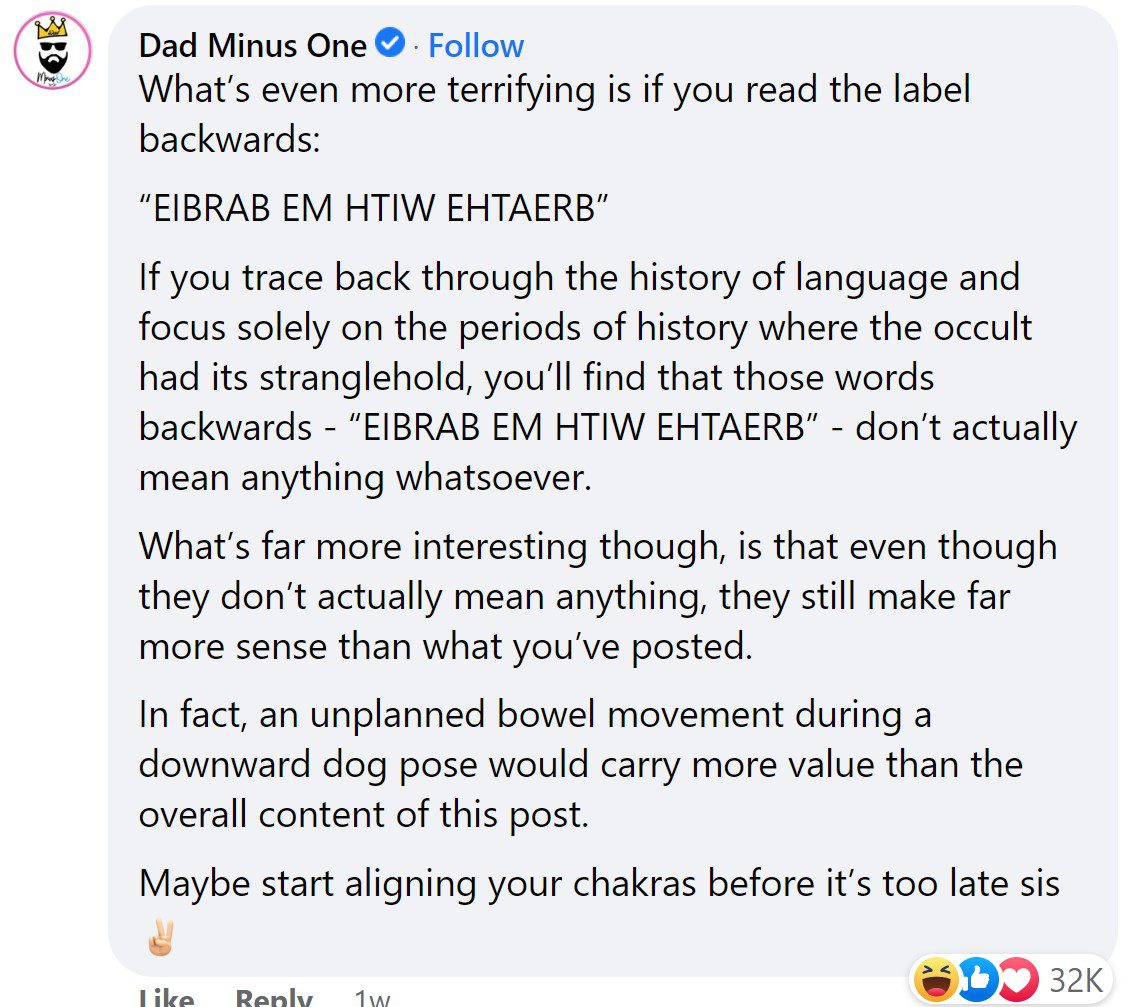 And while he’s definitely not a fan of her message, some commenters wholeheartedly agreed with Suri’s post and praised her for speaking “truth.”

As for Suri? She’s holding fast to her convictions. Which, in all fairness, “You do you, boo.”

“There are some professing Christians that have no issues with the teachings behind yoga and there are some that do. I am one that does.

Yes, I do believe when we open ourselves up to occult-based practices, there are dangers of demonic activity.”

And when we open the “Breathe With Me Barbie” box, apparently. 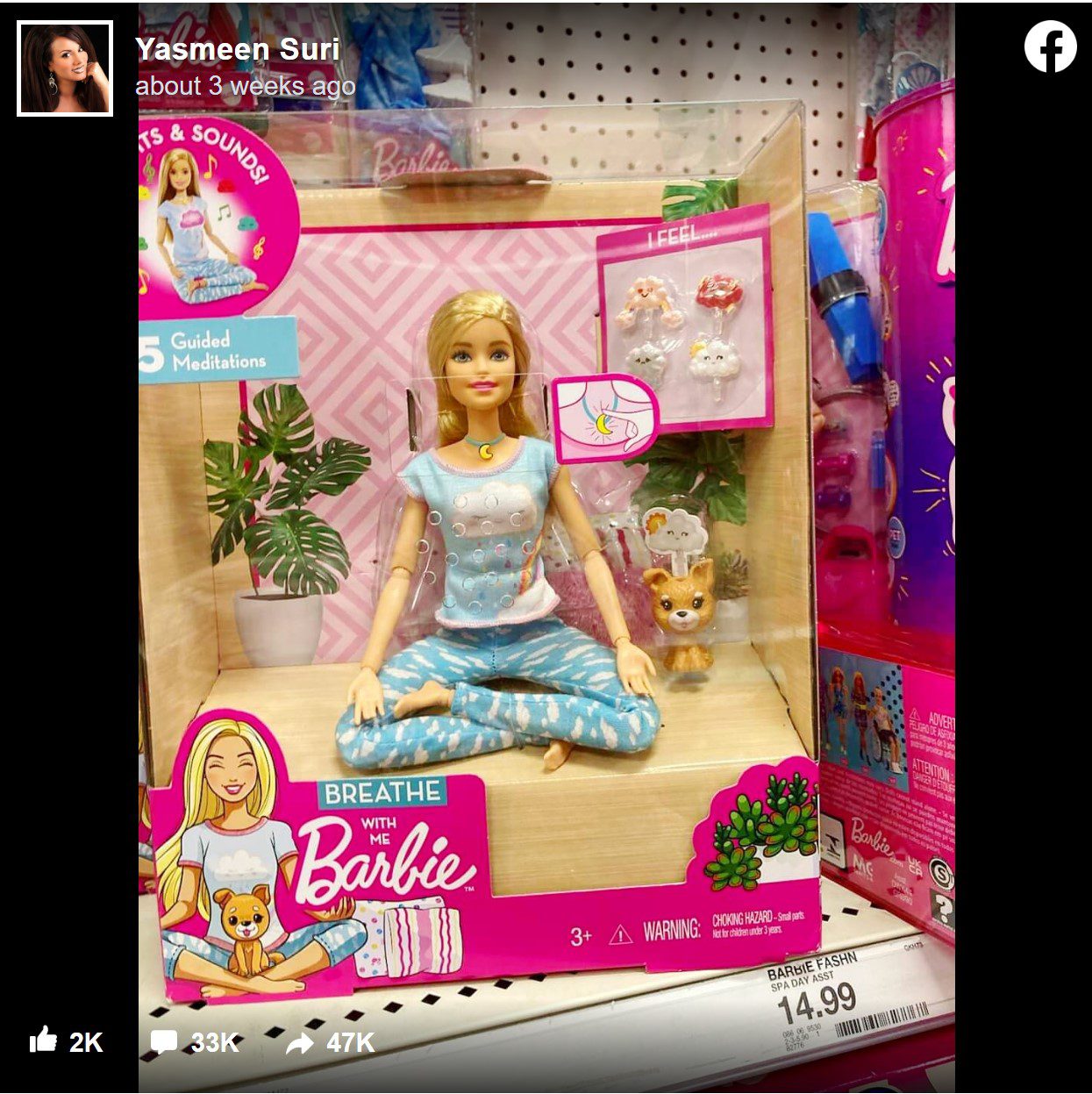 Professor Gets Shot (While Hav…


What One Mom Found On The Musical.l…

We often say that we’d do anything for those we love, but how far as we really willing to go? … Read More