Whale-watching tours are a popular activity on people’s bucket lists. People spend upwards of $100 or more to get up close and personal with the creatures in their natural habitat.

And for one “lucky” group of whale watchers in Monterey Bay, California they got a whole lot more personal than they bargained for.

Pictures of a killer whale taken during a recent whale tour are going viral on Facebook, but not because of the size of the whale.

Also, cold water shrinkage is obviously NOT a problem.

The owner-operated whale-watching tour company, Blue Ocean Whale Watch, which shared the photos, promises “a more intimate experience” and we gotta say, based on these pictures they definitely deliver.

“Killer whale “Orion” from the CA51 pod letting it all hang out on today’s 9:00am trip!

The pod stayed in the bay for most of the day but were on their way out by the late afternoon. They feasted on several sea lions.

And when they say, Orion “let it all hang out,” they weren’t kidding. Orion was on FULL DISPLAY and clearly having “a whale of a time.”

***Warning: These pictures are for “mature” audiences only.

Hey Willy, how about some dinner and drinks first??

The post has gone viral and amassed over 20K reactions, and 26K shares thanks in large part to Orion’s mass.

As for the comments? There’s a whopping 33K because naturally, people just couldn’t help themselves (ya’ll are dirty, dirty birds.)

Free Willy did nothing to prepare us for this. NOTHING.

None of us grew up with this. But clearly, something grew. Orion’s willy, that’s what. And people just can’t look away.

There were the obvious comments about size. (And yes, it matters).

Not that I’m an expert on orca penises, but I would hazard a guess that Orion’s specimen is one of the more exceptional specimens of his species.

There’s no compensating for this dude.

Or, as Ginger Jamie says, betcha he gets all the H2Hoes.

And just in case you need a little something to compare it to, to really get a sense of scale, here’s a visual to help you out.

If you’ve got it…flaunt it.

But it wasn’t just the size that got people talking. People had questions.

Sciency questions like, what type of whale is he? (We know, he’s a dolphin and not a whale but HUMPback suits him, no?):

“In other news, a shipping container full of Viagra is missing nearby.”

Inquiring minds want to know. On second thought, no, no we don’t.

Ewwwww, and also, it would explain a lot.

Know what else it explains? The Loch Ness Monster. Mystery solved.

According to a post by “My Alliance with Science,” many drawings of sea monsters are really just “large tentacled and alienesque appendages emerging from the water.”

“Apparently back in the early days of exploration many travelers would simply draw what they found/saw since the means to study, photograph, further explore it didn’t exist yet.

Well this is where many of our deep sea monster stories come from, because as it turns out many of these drawings may have depicted large tentacled and alienesque appendages emerging from the water giving belief to something larger and more sinister lurking beneath….

however in many cases it was really just whale dicks.

Whales often mate in threes so while one male was busy with the female the other male just pops his dick out of the water while swimming around waiting his turn.

There. That’s a thing you know now.” 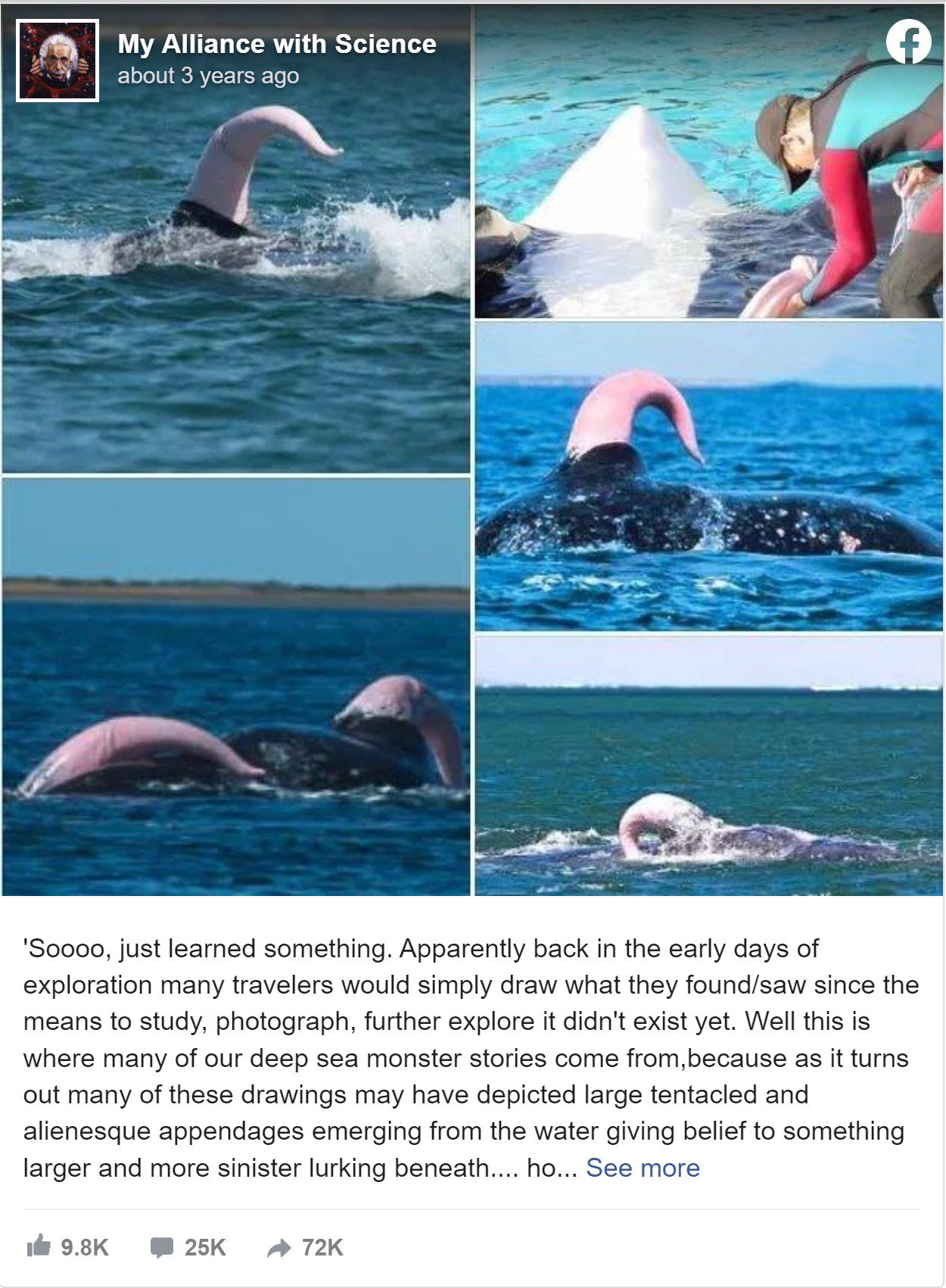 Sea monster or not, not everyone is a fan of Orion’s appendage. Or orcas, for that matter.

At least, not anymore.

And as for that lifelong dream of swimming with orcas? That’ll be a HARD PASS, thankyouverymuch.

That dream is dead.

In all seriousness, I don’t know whether I should be impressed or wash my eyeballs out with bleach.

(Or start planning a whale watching tour with Blue Ocean Whale Watch, that too.)

Just in case you haven’t had an eyeful yet, you can check out the original post with ALL the pics and the full comment thread below. 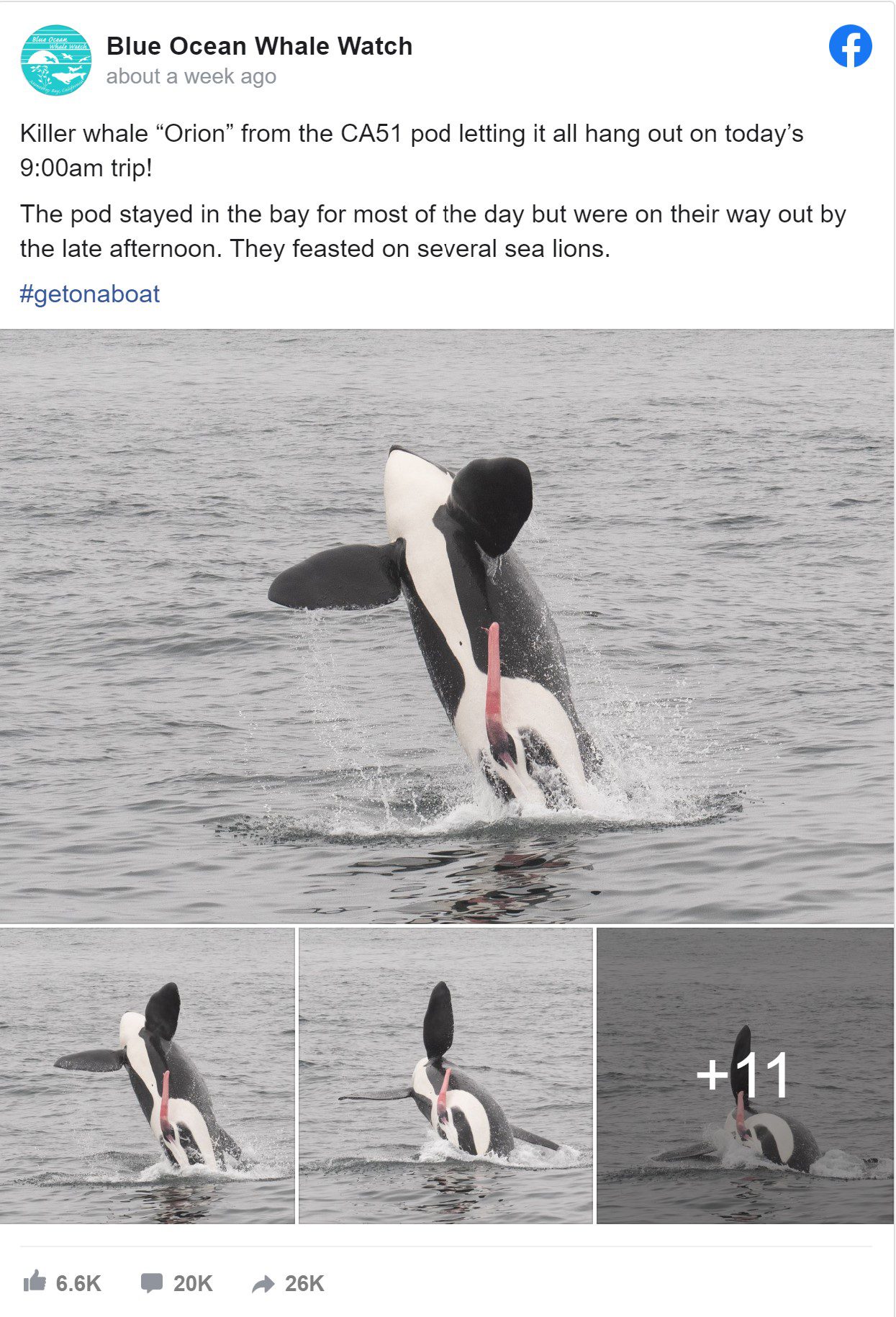 “Ali Spagnola on TikTok makes outrageous.” That’s what her bio reads and after watching her hilariously brilliant videos including her … Read More