There’s been a lot of talk as of late in the media about toxic masculinity, which is basically the worst qualities of dominant men that are used to justify the subordination of “lesser” men and women.

Not all men are like this, thankfully- there are tons of amazing dudes out there, & we’re thankful for them. But we’re talking about the ones that employ sexism, belittling, and condescension to everyone around them.

And one of the most obnoxious symptoms of toxic masculinity is one that most of us are all-too familiar with…. mansplaining.

Ah, mansplaining- when some men assume that lesser mortals, aka -“women”- don’t know enough about this big ‘ole world we live in, so they try to make it easier for us by explaining things in nice, easy tidbits. Because they’ve got everything all figured out already, people, and are more than happy to try & bring the rest of us clueless, vagina-owning folk up to speed about life.

But in a hilarious new twist, the tables are turned, and us womenfolk are more than happy to dish out “helpful” advice to a guy seeking help.

The Facebook page Man Who Has It All is a satirical page devoted to “exposing the absurdity of the patriarchy by turning the tables”. Their amusing posts depict a world in which men are treated in the same way that society treats women.

And their latest post has already garnered massive comments & shares, with over 3K shares since being posted two days ago. But it’s the 1.6K comments -oh, how we love us some good comments!- that are hilarious… because they ring pretty damn true.

The commenters took the ball & ran with it, and the “womansplaining” is now a thing.

The comments were in response to this facetious question from “Ben”, who is seeking advice from readers on how to get his wife to pitch in with the kids & the household tasks:

So what sound advice does Facebook have to offer a struggling dad? How about every.single.cliché that women in Ben’s situation are given online?!

(And for the record, how many of these bits of “advice” have you been given by some well-meaning fellow sancti-wife or mommy?? We’re guilty too, girlfriends…)

TOUGH LOVE: Suck it up, Baby Ben. You chose this, so get back to work.

Well, you’re clearly not as good as the rest of your peers, Ben, but you could hire a cleaning man.

Sure, it’s a sign of weakness in our eyes since you were BORN to serve, but it’s better than nagging your hard-working wife into helping you do your job. Have the decency to at least feel guilty for spending your wife’s money on that “luxury” too, Benny boy.

Too bad Ben’s wife isn’t as enlightened as Rosie here- she’s always willing to help HER husband get his cleaning done by “babysitting” the kids for him! And for an ENTIRE HOUR, too! Wish all wives were like Rosie…

Others wished their they were as lucky as Rosie’s husband; here are the responses: 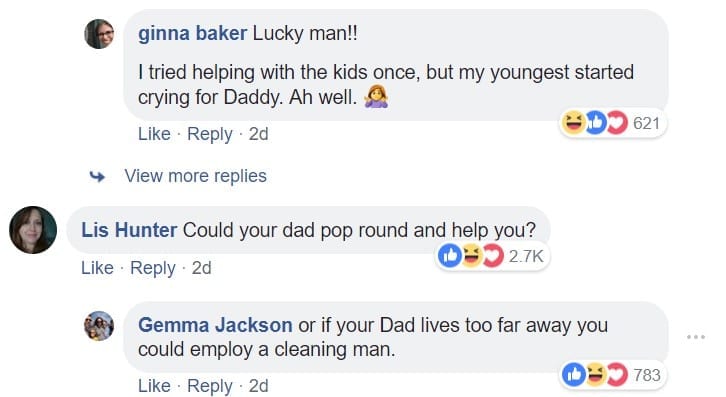 After all, shouldn’t Ben’s dad be around to help out?? It not like these wives haven’t tried to help their husbands with the kids, but once a kid asks for “Daddy”, well, we tried, you know? It’s not our fault you made our kids like you better, dads.

Gosh, Ben. If you hadn’t been such a control freak -asking your wife to put her socks in the hamper instead of on the floor TWICE!- then maybe she could have helped you.

I mean, she probably wouldn’t have because there’s an important game on, but she might have thought about it if you weren’t Mr. Bossypants. You didn’t ask nicely enough. Or at the right time. Or when she felt like it.

Maybe she doesn’t feel like helping because you aren’t putting out in the bedroom, Ben. Where’s the reward for her help?? What about your wife’s NEEDS, Ben??

EXACTLY. Instead of wasting time on social media, maybe Ben should take better care of himself AND stop “complaining” about needing help with HIS job. After all, there are tons of younger, hotter men out there who would gladly do it all for Mrs. Ben…

But not everyone has harsh advice for Ben. Some of the more sympathetic commenters dished out “helpful” advice in response to Ben’s need for help:

Ohhh… it’s probably just “that time of the month”, guy! It’s your hormones talking, Ben. It’s not your wife’s lack of assistance, it’s YOU. Put on your sweats and have some chocolate. But not too much chocolate, because remember: Mrs. Ben could always find a younger, hotter Ben…

(NOTE: How much do you LOVE the term “manstruating”, by the way?!”)

Again, Ben just needs to take better care of himself. But I’m sure he can order some vitamins from one of his Facebook friends. Probably the same friend selling the essential oil.

Yoga! Yoga fixes everything. And you have plenty of free time to do it, Ben, since you’re clearly slacking off in the house anyway. Or you could use your “free time” slot for it. Plenty of time to fit yoga in between 4:30am- 4:37am (because once the baby wakes up, you can’t expect your WIFE to do your work for you, guy).

But the bottom line is, Ben, you just need to deal.

Why is he even complaining?? He should be grateful he gets to be overworked! Thank goodness someone slapped him back to reality here.

I mean, how does Ben even have the time to complain on social media, anyway?? Maybe that’s why he’s not getting it all done. Again, SO GLAD someone pointed that out to him.

If you didn’t know that “Man Who Has It All” was a satirical page, you’d be shocked; how could people be so abrasive & unfeeling when poor Ben is clearly seeking help??

But that’s precisely why this post is both poignant and funny- we laugh because we get it. Too many of us have been in Ben’s shoes, or shoes quite like his, only to be told that we simply need to do or be more.

There are many, many great husbands out there, who do pitch it & carry the load of life with their wives. But Ben’s facetious example is also very typical of the burden that many wives/moms feel, which should be met with compassion rather than criticism.

Our husbands need to understand not just why we’re overwhelmed, but why they need to take an active role in alleviating that stress. And people of both genders need understand why empathy and support are the real “essential oils” needed to when dispensing online advice.

In a story right out of a Lifetime movie, a mother and daughter are now facing up to 16 YEARS … Read More