One of the biggest surprises of becoming a mother was just how hard breastfeeding is. For something that is “natural” and has been done by countless women since the dawn of humanity, it sure didn’t come naturally to me. At all.

To say I struggled is a gross understatement. From day one, my milk supply was low. No amount of breastfeeding, pumping, skin-to-skin contact, hot compresses, blessed thistle, fenugreek, or mother’s milk tea helped.

I googled every possible solution imaginable and literally tried them all.

I consulted with my doctor and lactation consultants. I took multiple doses of Motilium (Domperidone) a day. I drank copious amounts of water, ate oatmeal and spinach, and took warm, relaxing baths. None of it mattered.

For months I exhausted myself with my firstborn. I breastfed, topped her up with formula, and then pumped. Every two to three hours.

The guilt and overwhelming sense of failure very nearly broke me.

What I didn’t realize at the time, and what no one bothered to tell me, was that having a low milk supply isn’t uncommon. And that sometimes, no matter what you do, it just may never be enough.

Mom and actress Olivia Munn recently shared her own struggles with breastfeeding on Instagram and it’s shedding some much-needed light on the reality of low milk supply.

Munn, who shares 2-month old Malcolm with comedian John Mulaney, first alluded to her struggles in her IG story when she posted a snapshot of all of the supplements she was taking to increase her milk production. She captioned it with:

“Any other moms taking allll the supplements and teas and tinctures yet barely make milk?”

Munn followed up her story with a reel on Instagram that has gone viral with over 1.2M views, 135K likes, and 4K comments.

The video opens with Munn strapping a supplemental nursing system (SNS) around her neck while the words, “Breastfeeding when you have low-supply” flash across the screen. 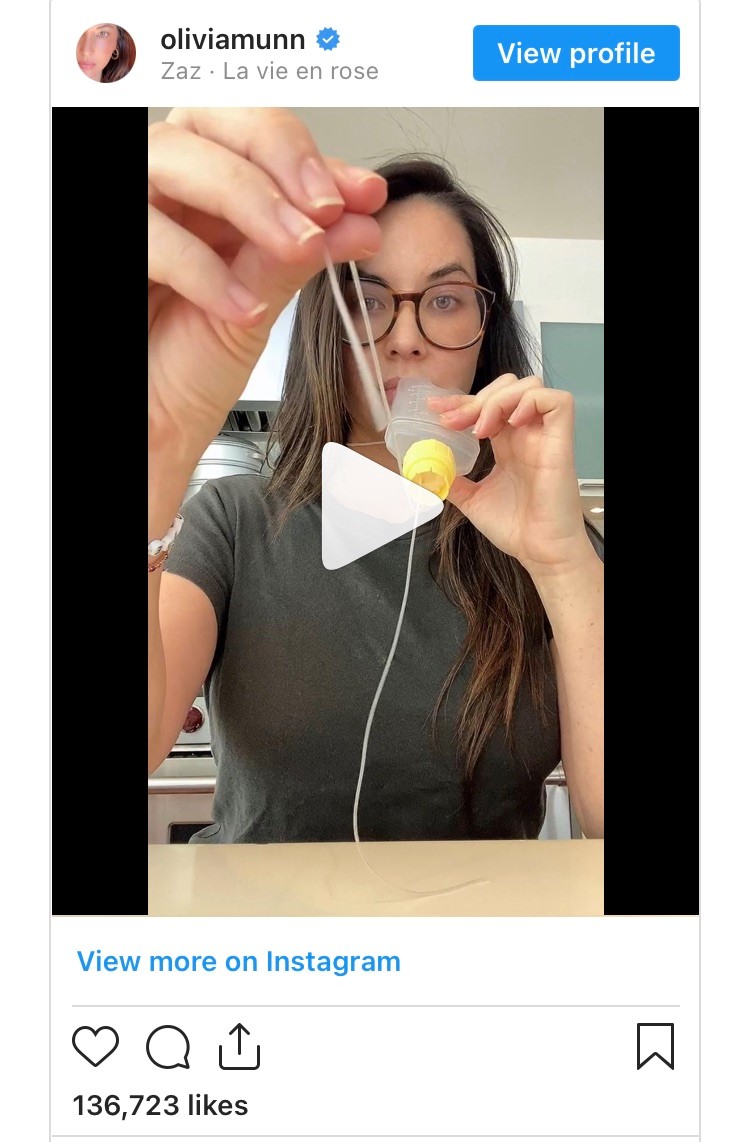 (For anyone not familiar with an SNS, it’s a special feeding device that administers supplemental nutrition to babies while they are being breastfed. The plastic bottle is filled with formula and very thin feeding tubes are taped alongside the mother’s nipples.)

Munn then provides an exhaustive list of everything she tried to do to stimulate milk production (spoiler alert: none of it worked):

Oof, I can RELATE.

She explains that in addition to all of this, she also tried the SNS, saying:

“I even wore this device filled with formula around my neck with tubes taped to my nipples so I could stimulate milk production while giving my baby the nutrients he needs.”

She goes on to say that nothing worked and it made her feel like she was failing:

“None of it worked. I cried and cried. I felt like my body was failing. I worried I wouldn’t bond with my baby.

Because at the end of the day, the ONLY thing that matters, is that her baby is FED. By whatever means necessary.

Munn shares a clip of herself breastfeeding Malcolm…:

…followed by one of her bottle-feeding him:

“AND so is formula.”

We couldn’t agree more and based on Malcolm’s contented response, we’re pretty certain he agrees too.

Her post is clearly resonating. Women came out in droves to share that they are experiencing, or have experienced, the exact same thing.

They thanked her for sharing and speaking out about something that so many women go through but so few talk about.

Women openly shared about feeling like they failed as a mother and how heartbreaking it was for them.

And they shared how freeing it was when they were finally able to ditch the guilt and just say, “F*ck it.”

Just hearing the words that someone else has gone through the same thing really can make all the difference.

Mothers bear the weight of so much pressure, from ourselves and from society as a whole. And when we are unable to do something that seems so inherently tied to motherhood, it’s devastating.

But the reality is that there are so many women out there who are unable to breastfeed, whether because of low milk supply, poor latch, inverted or flat nipples, breast surgery, medical conditions, allergies, and more. And it is not nearly as uncommon as it is made out to be.

Yes, breastfeeding is good for babies. But only if it works. For mom AND baby.

Munn ends her post with a message to all the mamas out there who are struggling with breastfeeding:

“To the mamas out there—do whatever you need to feed your baby and don’t let anyone make you feel bad about it.”

To which we would just like to say, A-freaking-Men.