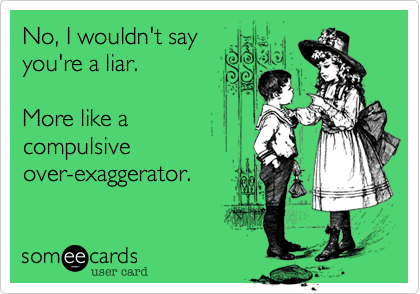 This is a slightly anger-charged post today, so bear with me and keep in mind that I do have legitimate reasons for being angry. I’m upset because I believe we have a silent epidemic in this world that is every bit as dangerous as lying and deceit. It’s exaggeration of the truth. I have been dealing with “enough” of this lately in various capacities that I have literally reached a breaking point. I cannot take another exaggerated story or exaggeration of known facts unless there is a disclosure somewhere nearby! If it’s done to bring home a point or make a story more interesting, okay. We’ll call it fiction and a day. Otherwise, cut the ever-loving shit!

Exaggerating known facts and circumstances can cause major issues. In fact, it’s dangerous. When people knowingly use terms like “a lot”, “all the time” and “constantly”, when in fact something has happened only once or twice, it can create a slippery slope. It can cause innocent people to be questioned, reprimanded or even lose their jobs. It can cause leaders to make poor decisions. It can cause trust to be forever broken. And it can cause people to get the wrong impression.

Here’s an example of where things get dangerous:

Sally says to Suzy (her co-worker): Jester (their boss) constantly ignores my emails. I get no respect.

Sally to Suzy: Nah. It’s fine. I’m not worried. (she knows she is exaggerating)

Later on, Suzy runs into Harry.

Suzy to Harry: Did you know that Jester hardly replies to any of Sally’s emails?

Harry: That’s not good. Not good at all. I will speak with Jester and get to the bottom of this.

In reality, Jester has replied to 98 percent of Sally’s emails. Only a few got lost in the shuffle.

So what just happened? Well, Sally’s exaggeration of the facts now has Jester on Harry’s radar. A good boss will give Jester an opportunity to explain and the benefit of the doubt if they have a good work history. When Harry approaches Jester, Jester is going to be confused and left wondering what the hell is going down in dodge – rightfully so. He’s likely to be pissed. The entire situation could have been prevented if 1) Sally didn’t make the comment to Suzy in the first place, but, let’s face it, co-workers talk and 2) Sally did not exaggerate the truth. Lots of wasted time.

My message is: keep it real. Laying it on thick, stretching the truth, overstating, whatever you want to call it, exaggeration is really deception. It’s lying and a form of crying wolf. So be careful with exaggeration.

Have You Seen the World’s Wor…