Who among us hasn’t had to Google “how to get crayon off the walls?”

My kids have each tattooed our walls and floors as if it’s a rite of passage through toddlerhood.

While I thought it was bad that my youngest drew a full-scale dog on the wall while hiding behind the couch, my crayon woes pale in comparison to one TikTok mom.

Her crayon incident has captured the attention (and the ire) of the internet after she posted about her own crayon walls.

“Well, you guys were right. It finally happened. Our landlord saw our videos on TikTok, and he knocked on our apartment door this morning and told us that we had to clean this sh*t up, so. I guess the, uh, party is over,” Linzy Taylor narrates over a video of herself scrubbing walls.

The #crayongate TikTok video has been viewed 24.4 million times and has attracted a dizzying 17.3K comments and 1.9 million likes.

Well, it is a series of videos documenting the massive cleanup efforts of one mom who allowed her autistic child to completely (COMPLETELY) cover his walls with crayon drawings.

The videos, which are all very cute and funny, are from TikTok creator Linzy Taylor who has a knack for storytelling and sarcasm.

I have watched her #crayongate videos a few times now, and I honestly cannot tell you how much of this is truly a joke and how much is real.

Here is what we know for sure.

Taylor has an adorable son with autism who appears to find peace and delight through art.

Specifically, drawing on his walls with washable crayons.

He’s so talented that his mom has been selling his works in the form of super cute stickers that anyone can purchase.

As a prolific TikToker, Taylor has created an enormous collection of popular videos that appear to document their life together, particularly her child’s artistic creations.

She’s amassed a following of 1.5 million, so she’s not exactly a boring creator.

But it was when she posted the viral video of her scrubbing the walls and saying that the landlord was upset that her child covered the walls in crayon drawings in a RENTAL property that everyone lost their minds.

Because, he covered the walls to the point that there may be more crayon than paint.

But does it turn out that she owns the house?

Honestly, I’ve watched about two dozen videos on her channel now, and I cannot tell you for sure, one way or the other. But I will say this, her ambiguity is a brilliant marketing ploy to sell stickers and grow her TikTok channel.

Who doesn’t love a little controversy?

As you can imagine, the comments on her #crayongate video have been fun.

TikToker @svvachi wrote, “and who’s fault is that,” which got 125.4K likes. I mean, honestly, they are not wrong, though.

But others were quick to come to her defense by saying none of the dramatic reactions to her viral video matter because she owns the house, setting off a comment war 17.3K deep. 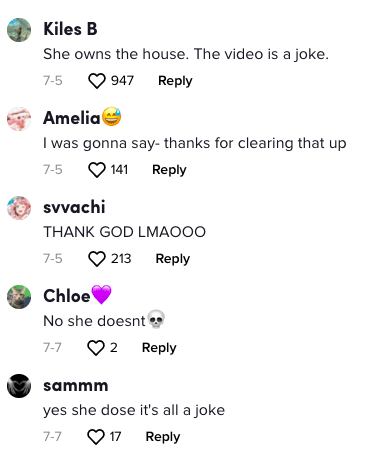 The comments section is divided into those who are convinced that she is the house owner and that her husband is the “landlord.”

Except that she repeatedly says in many videos that she is a renter and even vigorously defends herself in response videos to nasty comments.

Others are convinced that her ex-husband is the landlord and really is trying to make her life hell. With more than seventeen thousand comments to sift through, it really does read like a daytime soap opera.

But I am trying to figure out who the man in her videos is.

Is he the husband? The ex? The landlord? A neighbor? I am truly confused, and luckily for her algorithm, that confusion is keeping me tethered to her feed as I try to figure this all out.

In a follow-up video (one of MANY), Taylor features her super kid son as he draws on the same walls that she is supposed to be cleaning.

The video is a response to a comment that read, “why would you think it’s ok to deface someone’s property. Sad.”

She looks into the camera and hilariously says, “Yeah. Well, I mean, we can clean it, it’s just gonna take forever.” The camera then pans to another side of the room where her son is working on his art.

“Dude. Dude, please. Can we put those crayons away?” Taylor asks.

By now, the folks in the comments appear to have reached a point of offering parenting advice.

No one seems to know if this mom is joking or not — maybe she’s not?

TikTok user Adriana wrote, “Parenting isn’t easy but letting him do whatever he wants will continue not to make it easy. Consistency and boundaries for him.”

Another user offered, “He already drawing in the part you cleaned because you allowed it in the first place.” To which another user responded, “It’s a joke, she cleaned it so he can have more drawing room. It’s their house.”

Except that, in the follow-up videos, she never says that she made room for more drawings.

Parenting is pretty tough, no doubt, and certainly, the entire world seems to enjoy weighing in on how parents raise their kids.

But in this video series, it feels like this mom is intentionally stirring trouble to make a joke or sell stickers – it’s hard to say.

Whatever her intentions are, she’s got a helluva sense of humor and the ability to ignore strangers on the internet.

Either way, I’m ordering some stickers. They really are the cutest thing about this whole saga.