Kimmel dared parents to film themselves turning off the TV while their kids were playing Fortnite, and the results were, well, INTENSE.

If you’re not familiar with FORTNITE, it’s a multi-player, interactive shooting game that kids are addicted to, and I’m talking hard-core addiction. If you’re the PARENT OF A FORTNITE PLAYER, then you know the pain of hearing about it, ad nauseam. And you probably chuckled (or shuddered) at the very idea of turning the TV off while your kid was playing, because you can imagine the histrionics that would ensue.

So Jimmy Kimmel dared parents to turn off the TV while their kids were in the midst of Fortnite-ing (is that a word? It probably will be a word soon…), and the kids reacted, well, as you’d probably expect.

here’s the clip below.

I love a good prank, and my kids are used to being pranked by me.

We all know that parenting requires A SENSE OF HUMOR, so while I thought it was kind of rude to turn the TV off so abruptly, I snickered at the first few. The blinking incomprehension on some kids’ faces made me laugh, hard.

My personal favorite? The kid who turns to his mom after the screen goes dark & says:

What are you doing… go cook!

In other words, “Mom, don’t you have something better to do than mess with me??”

(And the answer to that is a resounding NO- there’s always time to mess with kids!)

Or the little dude who tried to quell his panic by chanting his own power mantra:

But the reactions of some of the other kids in the video gave me pause, and not in a good way. A few of them dropped some F-bombs, which I was a little surprised by (but granted, totally get why the kid would feel that way, & couldn’t blame him). 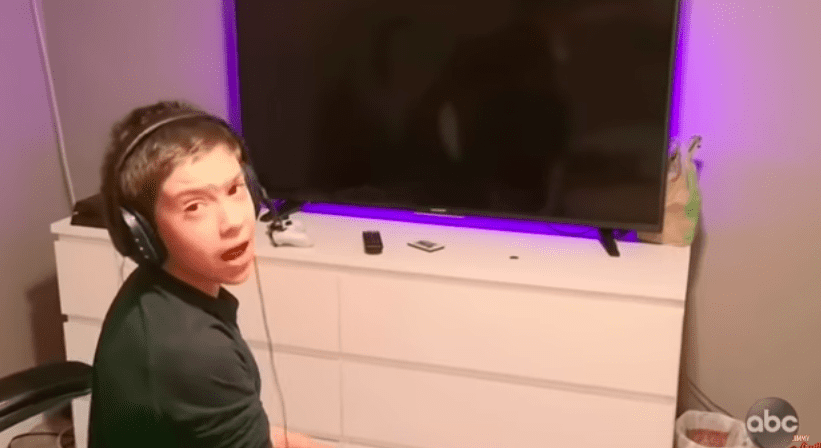 Then there were the kids that got physical. And by “physical”, I mean full-on attacking the pranking parent holding the video camera.

I get why a kid would be upset. I’d be pissed if I was intensely focused on a task & someone deliberately disrupted it.

But if my kid actually hit me because I shut off his Fortnite game, he’d be saying nighty-night to Fortnite for a long time.

The video segment had its funny moments, but it also illustrates a sobering reality- some kids are so addicted to Fortnite that they resort to tantrums, begging, and physical aggression to get it turned back on.

The extreme responses highlight an unintentional lesson- maybe the game should be turned off more often. I’m not suggesting that parents pull the plug abruptly just to get a rise out of their kids, but maybe a little reduced gaming time wouldn’t be the worst thing?

I’m not trying to pull the sanctimommy card here; my kids love their VIDEO GAMES just as much as anyone else’s. I’m also not going to make any assumptions about the parenting of the video participants, because obviously the clips are intended to be used for fun.

And let’s face it; some of the clips were genuinely hilarious. But I found myself laughing less and more perturbed toward the end- if my kid was dropping F-bombs and swinging fists at me, it’d be game over, son!

Jimmy Kimmel’s latest prank has gone viral, and while it’s funny, it’s also a reminder that turning Fortnite off a little more often might not be the worst thing.