Like many women, I do most of the house work – the kitchen, the laundry (my husband is allowed to do the laundry, just not fold laundry), the washrooms, the vacuuming, etc. Since I lack the green thumb, my husband takes care of the outside – the mowing of the lawn, the gardens, and all other aesthetics we feel are needed.

Because I’ve been working part time since forever, I’ve never really minded doing the housework since I had more time. However, since mini arrived, the chores have piled on and I’M FEELING A BIT OVERWHELMED. I’m getting bitter about the crap being left all over the house.

Which is why I have decided that I will not pick up after my husband anymore. 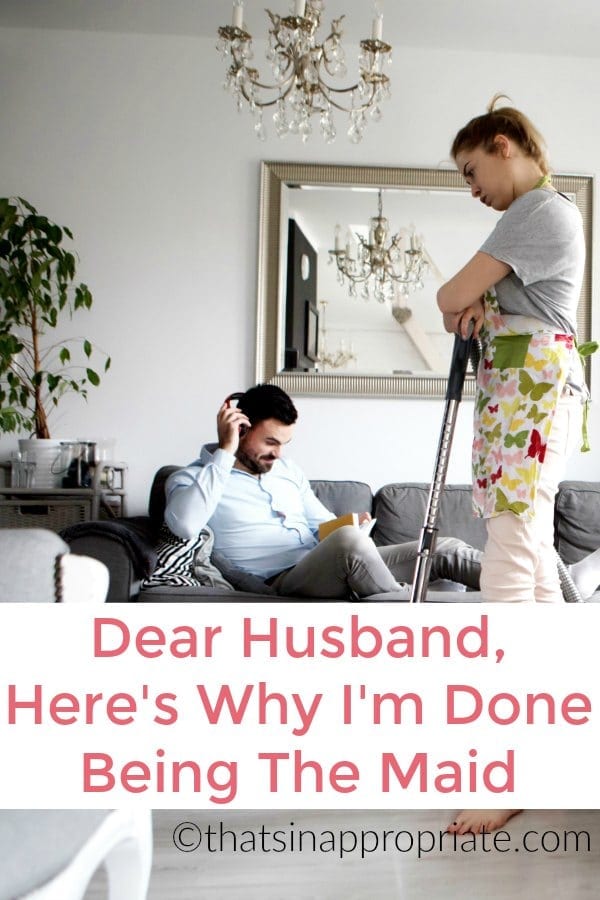 His dirty laundry lies on the floor beside his side of the bed. A pack of batteries can be found hanging out on the counter in our bathroom, since he had to replace the batteries in his shaver. His bowls are down in the basement on his desk, filled with the crumbs of chips he ate the previous night. Is that mold in that beer? His bag in left on the floor in the front hall and his shoes can be found in the bedroom – can there be anything worse?!

While I drive my husband bonkers by creating a mountain of organized chaos on the dining room table in which everything is placed in specific piles, ready to be transported to their rightful place, I still pick up after myself.

My dirty laundry is in the laundry baskets. My bowls and cups and wrappers are all placed in the sink, or at least the kitchen table. My lady things are all in their respected places, tucked out of the way.

My husband will tell you a different story, though. He’ll tell you that he hates picking up my tissues which I leave around the house – which is, unfortunately, not a lie. He’ll tell you he’s tired of throwing out my banana peels in the mornings after I make my smoothies – which again, unfortunately, he isn’t lying about. However, while I’m leaving the banana peel on the cutting board, he’s leaving the spoons he stirs his coffee with on the kitchen counter.

So while I appreciate his rebuttal – not really, at the end of the day, I’m the one picking up most of the random shit laying around the house because everyone’s arms are too sore and brains are too tired. The truck will be in the middle of the hallway and the shoe will remain under the dining room table all week if I don’t move it.

I’m like the go-to for cleaning and I’m sick of it.

So it appears we both have some work to do. Yes, I need to throw those gross tissues away in the garbage because let’s be real, that’s gross. But he also needs to step up. I’m the one who shakes out my son’s socks and turns out his shirts to be washed. He’s four so I’ll do it. My husband is a quite a few years older than that and I am truly confident that he can take care of this kind of stuff himself.

I know which of my shirts are dirty or clean and the stains on my kid’s clothes don’t require much thought. But my husband’s? I just don’t want to do it anymore.

I don’t want to pick up the random dishes

and long-lost dishes – strewn all over the house to clean them (I just did the dishes!).

So from now on, stuff gets cleaned around THE MESS. I’ll dust around his wrappers and I’ll move the piles around his side of the bed so that I can vacuum, but that’s where I stop. I won’t be going through your stuff to see if anything can be thrown out and I won’t be moving your stuff out of the way and hope not to trip. 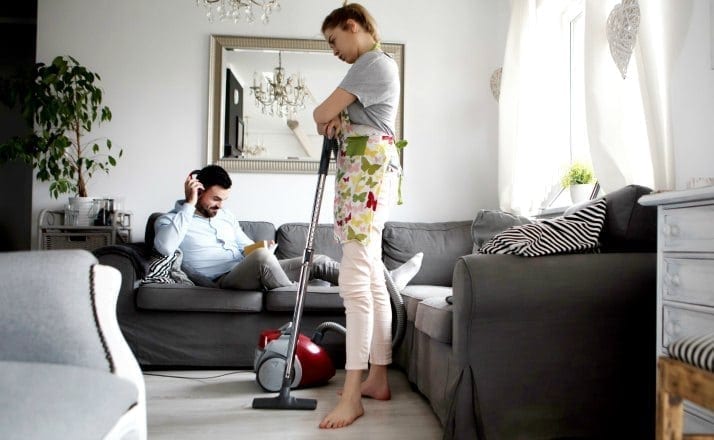 I have one kid and one kid only and until said kid can do this kind of stuff on his own, I’m happy to lend a hand. But I’m tired of doing it for everyone. I have my own shit to tidy. I have piles to get rid of. I have my writing and my work and my parenting to look after. If my husband cooks, I’ll clean, and I expect the same in return, whether I’m working or not.

Look, I LOVE MY HUSBAND and I don’t want to complain. I mean, he does everything he can for his family and I can’t express how much I appreciate him and everything he does for us. But there comes a time when a person burns out from the overflow of everyday mundane tasks, such as picking up after everyone, even the dog.

So my dear husband this is it. I’m done. Your shit is sitting right where you left it. If you want clean clothes, you better drop them off in the laundry basket or do it yourself.

Have You Seen the World’…


Moms Get Together For a “Fiel…

Are you feeling a little stabby these days? Like, if one more person chews like a beaver at dinner you … Read More