Filter Free Parents
Home Kids Elementary Don’t Talk To Strangers Is Bad For Our Kids, Teach Them About...

“Don’t talk to strangers” is right up there with “wash your hands!” and “don’t pick your nose” when it comes to the top lessons we teach our children.

I can still hear my mom’s voice, calling after me as a kid, my little legs pedaling madly, my face flush with the exhilaration of FINALLY tasting freedom. “And remember honey, don’t talk to strangers!”

“Look both ways before crossing the street.” “Be careful!” “Don’t talk to strangers.” And of course, “Just because so-and-so does it, it doesn’t mean you should!”

As our kids start to venture out into the big bad world we inundate them with our words of wisdom. But then something awful happens.

The news of yet another school shooting. Or a devastating natural disaster. And we solemnly sit our kids down and tell them, “Look for the helpers.” And suddenly? Don’t talk to strangers seems like it may be too encompassing and restricting.

Because the reality is, not all strangers are evil child-snatchers, bent on kidnapping our children and initiating them into a sex-trafficking ring.

In fact, I’d even venture to say, the majority of strangers that we come across every day, in the grocery store, or at the coffee shop, are just regular, ordinary people.

Living lives similar to our own. And when bad things happen? Our child gets lost in a store, or breaks an arm at the park when we’re not there?

Strangers may be all they’ve got to turn to. Whether it be a mass tragedy or something smaller scale, our kids will, at some point, undoubtedly have to rely on the kindness of strangers.

Rather than telling our kids don’t talk to strangers, teach them to look out for sneaky people instead.

Who Are The Sneaky People?

Sneaky people are the ones who look least like the “big bad wolf”. They are friendly and appear kind. They may have the face of a sweet grandma, or doting grandpa. Or they may look just like you or me. But they are wolves in sheep’s clothing. And just like in Red Riding Hood, they have a nasty trick or two up their sleeve to entice our children. 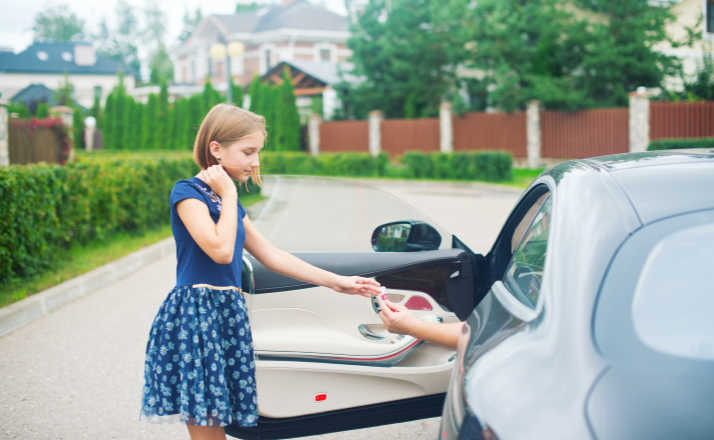 Pattie Fitzgerald, founder of Safely Ever After, an educational company dedicated to teaching “safe-smarts strategies” to parents and kids, refers to them as “tricky people.” She tells Today Parents:

“’Tricky people’ is certainly more effective because most strangers are not dangerous…kids think a stranger is going to be somebody who is kind of scary looking or scary sounding, but statistically, if someone wants to harm a child they are not going to appear scary, they’re going to be charming, have an enticing offer, and seem friendly.”

And sneaky people? Aren’t always strangers. Oftentimes, the people our kids need to be protected from are those that they already know.

Not all strangers are dangerous. And not all people we know are safe. In 2019 The National Center For Missing And Exploited Children “assisted law enforcement and families with more than 29,000 cases of missing children.” Of these, less than 1% were non-family abductions.

The FBI says that:

On average, fewer than 350 people under the age of 21 have been abducted by strangers in the United States per year since 2010

On the other hand, Safely Ever After states that:

90% of all childhood sexual abuse occurs by someone with whom the child knows and has a trusted, established relationship, not by a stranger. 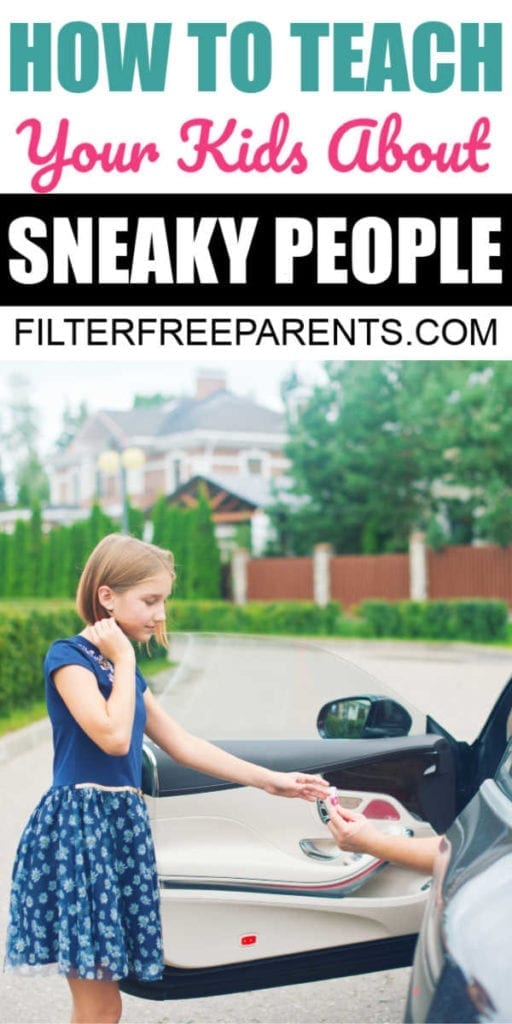 Firstly, we need to talk to our kids about sneaky people. What they may look like, act like, do, or say. Our kids may come across them in-person and on-line.

It is crucial that we teach our kids what signs and behaviors to watch out for and how to identify and respond to threatening situations. Instead of “don’t talk to strangers” parents need to focus on teaching our kids to watch out for signs of adults behaving inappropriately. Red flags include:

Parents should review safety rules with children, including having a “safe list” of people your child can go with and be alone with.

Anyone not on the list? Can be verified with the use of a special family “code word”. Agree on a password with your children to use if someone they don’t know or who isn’t on the list approaches them to pick them up.

In addition, role playing and practicing various scenarios with our children is also important in teaching them about sneaky people.

Work on refusal skills, disengagement skills, discernment skills, and how to seek help. Teach our kids to trust their feelings. If something or someone makes them uncomfortable empower them with the ability to say “NO!”

As much as we know that it is our job as parents to raise our kids to be independent, it’s terrifying to send them out into the world on their own.

We worry that something will happen to them. Merely telling our kids “don’t talk to strangers,” is no longer enough. We have to help them to recognize the warning signs of sneaky people, in the real world and in the digital one.

Equipping and empowering our kids with life skills to recognize potentially harmful people is crucial to keeping them safe.

Girls Were Told Not to Say No To Bo…