You might not have much in common with today’s celebrities. In fact, your lives may seem like polar opposites in every way, shape and form.

But if you enjoy using social media to share aspects of your life with the public, then you likely have something in common with the celebrity world:

There are people that love -simply LOVE- to post a negative, provocative, or hateful comment on someone social media posts… simply because they can.

Sure, posting to social media allows the potential for these situations to happen.  But there should be some limits to where online criticism can go.

Take kids, for example. Decency should deem mocking or criticizing someone’s children “off-limits”, you would think- but you’d be wrong.

And one celebrity dad’s not having it.

Former basketball star Dwyane Wade is calling people out for their “hateful” comments that were focused on his son’s appearance in a recent Thanksgiving family picture that was posted by his wife on Instagram.

Dwyane and Gabrielle recently posted a Thanksgiving family snapshot to Union’s Instagram account that featured themselves, Dwyane’s son Zion (from a previous marriage), and their baby daughter Kaavia.

Everyone is smiling happily in the photo. The family looks cozy, peaceful, and relaxed. It was obviously a special moment captured in time, a wonderful holiday memory.

Until the critics arrived.

And their focus was not the happy faces. It wasn’t the coziness of Zion smiling brightly between his dad and step-mom. It wasn’t Kaavia nestled snug & sweet in her daddy’s arm.

They didn’t even focus on the heartwarming message that Gabrielle had shared in the caption -the POINT- of the post:

The critics were obsessed with one thing: Zion’s appearance.

In addition to his cool boots & charcoal jeans, Zion was wearing a shorter crop top and sporting long fake nails.

Sure, there were plenty of supportive comments that appreciated the sweet family pic and Zion’s self-expression.

But some commenters couldn’t seem to help themselves from weighing in with their judgement of his appearance, or their opinions on his parents for “allowing” him to dress the way he chooses:

So a man allowing his child to express him or herself isn’t being the “head of his family”. That’s a hit on Dwyane. And “Stupidity is a man wanting to be (a) girl”, which is a direct attack on Zion, a KID. 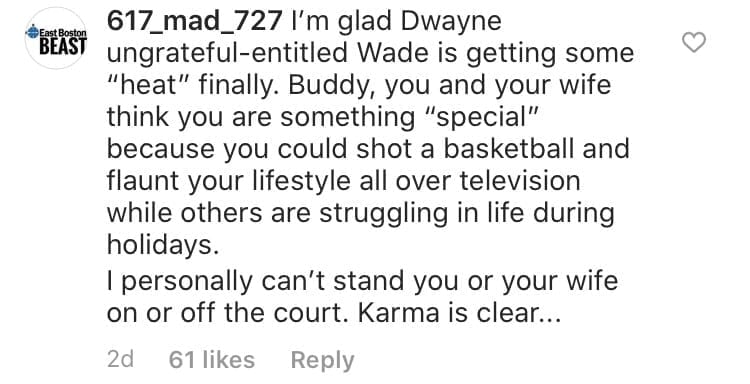 This commenter is happy Wade’s son is being publicly attacked because Wade deserves it, apparently, for thinking he’s special. To this guy, Zion’s choices are KARMA- a punishment for his parents that have famous careers.

(Ok, so not attacking any implied sexuality/gender issue, but the generalized “sanctimommy” criticism. “If that were MY kid, I’d never…” 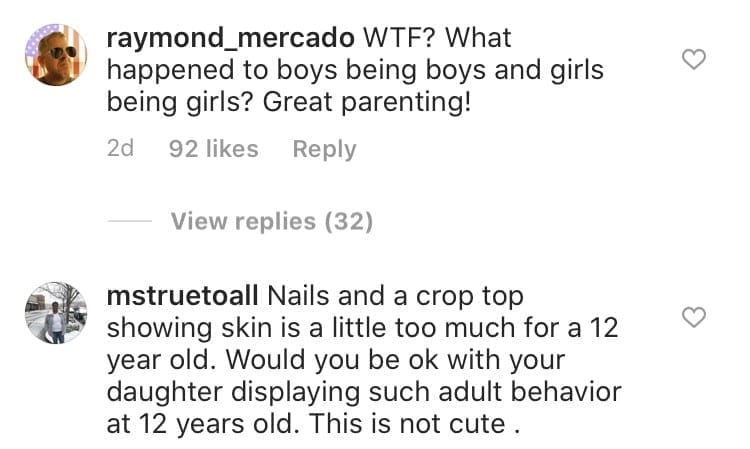 “Great parenting”, Dwyane & Gabrielle. Oh, and another perfect parent mansplaining what age is too young for false nails- for boys or girls.

A PARENT, Eric. Just like a parent that would take his or her 11 year old female daughter to get her nails done. Unless you agree with mansplainer above, who thinks 11 is too young for ANY false nails.

Ah, so clearly an individual’s gender identification and/or sexual preference is the direct FAULT of the parent(s). Thanks for clearing that one up for us…. *insert eye roll here*

It can be easy to chalk a situation like this up to the parental choice to post public images. People are quick to blame the poster for any “hate” they receive: “Well, you made it public, so…”

But this kind of intolerance, mockery, & judgment doesn’t only live in the world of social media. While it’s far easier for people to make judgmental comments from a keyboard, the same snide, hateful comments are expressed in person to people as well.

And like a good father would, Dwyane not only supports Zion in being exactly who he is, but defended him against the barrage of haters.

I’ve seen some post-thanksgiving hate on social about my family photo. Stupidity is apart of this world we live in—so i get it. But here’s the thing—I’ve been chosen to lead my family not y’all. So we will continue to be us and support each other with pride, love & a smile! ??

Wade’s tweet represented exactly what his wife Gabrielle had referred to in her Thanksgiving post description: gratitude, thankfulness, and love.

There will always be negativity. And in a world where social media is prevalent, our kids can occasionally feel the sting of it (as can we as adults!). But in being authentic, compassionate human beings, we don’t have to cower beneath the hate or opposition.

As parents, we can be proud of our children for being exactly who they are meant to be.

We can follow in Dwyane’s footsteps in reminding ourselves that our kids were given to US to raise- not our neighbor. Not the rude troll that mocked our latest tweet about kids. Not the sanctimommy who thinks she knows what your child needs better than you do.

Dwyane Wade & Gabrielle Union-Wade are creating a family unit based on unconditional love and acceptance- if only more social media commenters could do the same.

We all know that kids have a way of getting themselves into some really bizarre situations. Our first few years … Read More