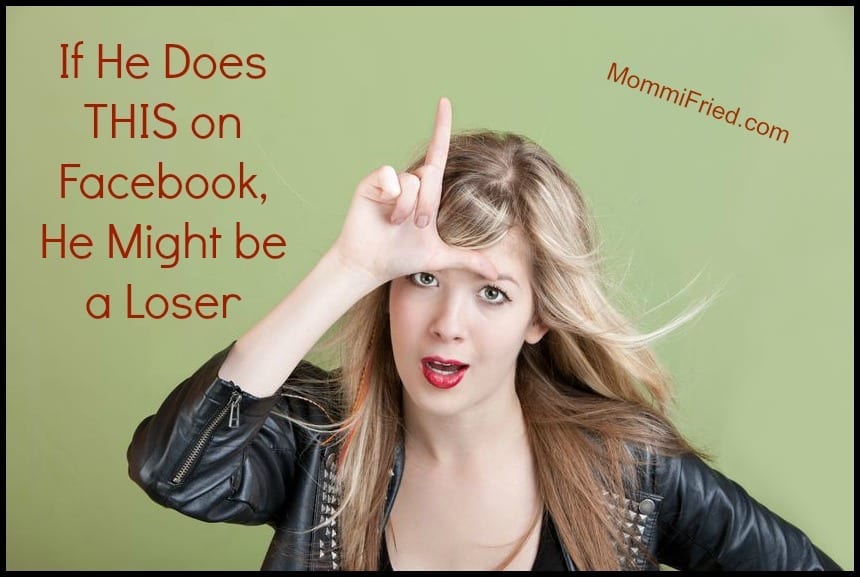 Okay, ladies. Lately I’m hearing of and seeing a lot of you randomly adding strange men as Facebook friends. First…why? WHY? Unless there is a common connection or you somehow know him, why? It’s risky. You have no idea who is sitting at the other end of the keyboard. And I’m here to tell you, it’s not pretty. Or cute. Or in any way studly. It’s probably pretty damn scary with a splash of cuckoo to boot. I’m writing this post from my heart, from the depths of my soul…urging you to use caution.

If you see him doing this on Facebook, there’s a good chance he’s a major loser in “real” life:

Is Friends With No One

If his only friends and commenters are Nunu from Pajackastan or JimboPhatstick from Planet Alien or if he only has 30 friends on Facebook (and 27 have him blocked from their news feeds), there’s probably a reason for this. When other women AND men show a lack of interest, chances are he could be a loser.

Fun and jokes aside, no self-respecting man is going to take a selfie, let alone post one for the world to see on Facebook. That’s like breaking unspoken “bro code” and just…weird. If he’s pointing to something on his outdated T-shirt while taking the selfie, subtract another five points.

Wears Sunglasses Indoors in Ninety Percent of His Photos

Is he Stevie Wonder? If not, why is he wearing sunglasses indoors? To look cool? To pretend that he’s something he’s not (like Stevie Wonder or 50 Cent)? Yeah. You might ask yourself what he’s hiding.

Converses with HIMSELF in Comments

I will eat my right toe if this isn’t the biggest red flag. If he’s holding a full conversation with himself in the comments of things he posts, RUN! Run fast. Run hard. Run like Forest Gump has nothing on you. My gawd just run. Unfriend him before you are sucked into a world of craziness.

Refers to Women as “Bitches”

I have just one thing to say to that: #YesAllWomen. Take a stand ladies! Time to end the raping, stalking, harassing, and otherwise ill treatment of women—everywhere!

Classy. Real classy. The stray text or post, okay. A continuous stream of drunken crap, unfriend him and move on. There are better men out there. Like…all the rest of them.

Likes All of His Own Posts

Can you spell narcissist? Can you spell loser? Thankfully, with only 30 friends and everyone hiding him from their news feeds, no one sees his posts–even with the extra helping of “I’m a little whackjob.”

Commenting on posts with images–particularly with stupid or offensive memes–reveals that he lacks depth or the ability to think on his own. In fact, let’s just cut to the chase. He very well could have the IQ of a donkey.

I think after three hashtags, the Internet should zap the shit out of someone to prevent them from adding more. As it says in an article I just read: “It is not OK if your hashtags exceed paragraph length. It’s just not.” If he is using a stream of hashtags, most which are not even relevant to the post, it’s time to hit that “You suck and I’m dropping you” button.

If you’ve friended a random guy on Facebook and he’s done some of the stuff above, unfriend and go wash your hands. Your mother says so.

Clare the Crypt-Keeper Crawley, a tragically single woman at 39, is the oldest Bachelorette in 16 seasons of this cringe-worthy … Read More