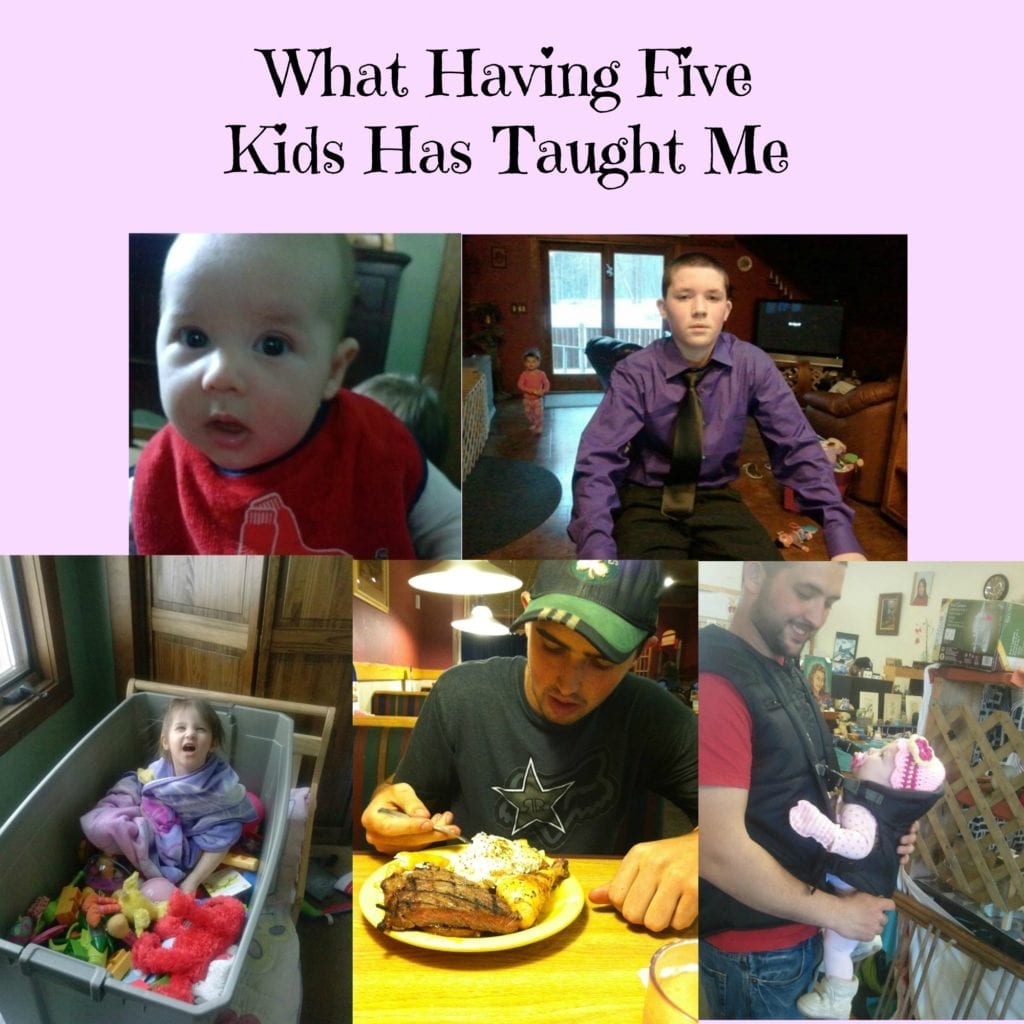 In December, I was honored and humbled to be featured on Jill Smokler’s site Scary Mommy. My post How to Raise a Small Army was well-received, with other moms nodding in agreement (I’m not a creeper. I couldn’t actually see them. I’m just assuming that’s what they were doing.) or sharing their own stories about raising a buttload of kids. Reflecting on this post, I thought of some of the things having five kids has taught me.

Here they are in no particular order (like my kids):

And by unexpected I mean the “Holy shit! How the hell did that happen?!?!” moments. With kids everywhere, you’re likely to see it all. Expect an arm to break into the shape of an “S” (oh yes that happened), toddlers reenacting NASCAR races on rooftops (yep, that did too), and bungee jumping from the top of water towers (okay, I made that one up for emphasis). Just be on the lookout for things you once only saw on Idiots Caught on Tape.

You’re going to call Harry Sally and Suzy Billy and everything in between. Your best bet is to come up with nicknames. For some reason, our brains are wired to mix up names but not cute pet names we give our children. I know. It doesn’t make sense. But trust me on this one. The blueprint for the human brain is as messed up as the one for the Leaning Tower of Pisa.

An Empty Nest is a Mythical Wonder

I’ve been raising kids since 1999. Considering my youngest is just five-months-old, I’ll be raising them for at least another eighteen years. That’s 41 years of bringing up kids! My empty nest is going to be a hammock hanging in front of a nursing home. Or a white padded room at the nearest psychiatric ward.

Patience is NOT a Virtue. It’s a Damn Miracle.

Every second there is noise. Movement. Screaming. Laughter. Toys being tossed into the air. Someone wants this. Someone needs that. It never ends! Whoever coined the phrase “patience is a virtue” did not have five kids. Patience is a damn miracle, people. You inevitably have moments when you’re shaking so fiercely, you have to momentarily step outside the “situation” to regain your sanity and composure. Make sure the exit has a lock or else they’ll follow!

Every Kid is Different

When you only have a few kids, it’s hard to see the vast differences between children. With five, it becomes ever-clear that no two kids are alike. Forget night and day. We’re talking Atheist and Catholic or Republican and Democrat different.

Even if you only have one kid, you’re likely to have a grandkid or two. With five, there’s a high probability of many. I already have one and I can assure you, she makes the world go ‘round!

Love Has No Limits

If I’ve learned anything from having five kids, it’s that love has no limits. They are the reason I exist and the greatest loves of my life. I can’t imagine a world without my 91-93-99-11-13+12!


If You’re a Dirty Bird with a…

I avoid being in any pictures at any and all costs. I never take “selfies” and to be honest, I … Read More