For the moms who celebrated life at the appearance of two pink lines, and mourned it after the disappearance of a heartbeat.

And for the dads whose eyes lit up upon hearing the words “I’m pregnant,” but whose hearts dimmed when the words “there’s no heartbeat” shot through their ears.

The moms who grew another heart, and then watched it vanish into darkness. And the dads who were changed by the whisper of life and again by the screech of death.

The moms who expected to hear the thump-thump-thump of a beating heart, but who heard nothing but heartbreaking silence instead. And the dads who rearranged their schedules in order to witness the evidence of new life, but instead witnessed that life come to an end. 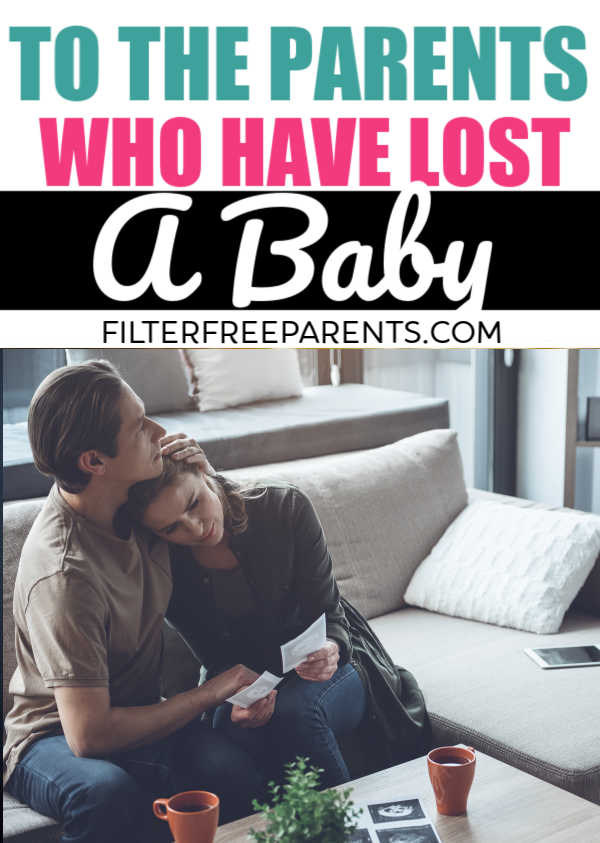 The moms who felt their own heart double in size before it crumbled into pieces.

And the dads who shared DNA with their child, but never got to share in their life.

The moms who held a baby in their womb, but never in their arms.

And the dads who looked forward to showing their child the beauty of life, but instead saw first hand the burden of death.

The moms who gave birth, but never heard their baby cry. And the dads who said goodbye before even having the chance to say hello.

The moms who walked into the hospital carrying a baby, and who walked out carrying nothing more than a teddy bear. And the dads who held the hands of the mothers who went home without a baby to hold.

The moms who became mothers, but never got to hear their child say “mama.” And the dads who dreamed of watching a child grow, but instead experienced the nightmare of watching one die.

The moms who understand that life isn’t infinite, but love is. And the dads who carried on with empty arms, but never with an empty heart.

The moms whose world fell apart. And the dads who helped hold it together.

This is for the moms and dads who celebrate their child’s birthday each year – without their child.

For the moms and dads who said goodbye to their baby on earth, and now wait in anticipation to say hello in heaven.

This is for the moms and dads who have lost. The ones who lost a baby, but have never let go. The ones who lost every single moment of watching their baby grow up, but won’t forget the moment they became parents. You are never alone. You are infinitely loved. You are not forgotten.

And while your baby has died, your parenthood lives on.

This piece originally appeared on the Facebook page – A Beautifully Burdened Life.

This is for the dads who have lost – a baby, a child, a piece of their future.The dads whose eyes lit up upon hearing…

Posted by A Beautifully Burdened Life by Jenny Albers on Thursday, February 7, 2019

This is for the moms who have lost – a pregnancy, a baby, a piece of their heart.The moms who celebrated life at the…

Posted by A Beautifully Burdened Life by Jenny Albers on Tuesday, February 5, 2019


Mom’s Viral PSA Warns Of The …

You know, there have been a lot of headlines lately that have made me scrunch up my brow and mutter, … Read More