When I was a kid, the most advanced technology anyone had was a Walkman, and that was just the rich kids. The rest of us doodled notes in class and sneakily handed them to friends.

But this is a different world, and kids these days are connected in ways that were once unimaginable.

So, it makes sense that as we figure out how to navigate a tech-heavy world, there will be some serious chaffing between the boundaries of trying to keep everyone safe and protecting their privacy and rights.

One mom has gone viral after tweeting that her child’s school updated its cell phone policy to include “School officials can now read any text messages between students, even if the texts occurred outside of school hours,” to which the mom responded, “Nopity nope nope.”

As you can imagine, many parents had different takes on this.

My daughter’s school released a new cell phone policy that includes, “School officials can read any text messages between students, even if the texts occurred outside of school hours.”

French’s tweet has nearly 10K comments and has since been muted—but you can still read them.

The first responses are from her and appear to add some context to her stance on this new school rule. Note: we don’t know what school this is and cannot confirm what their actual policy reads.

One reads, “Me to my daughter: ‘Your phone is my personal property. If someone asks to read your texts, you tell them to call me and ask.'”

Another reads, “(Oh, people, *I* read her texts and discord threads sometimes. Usually only because she asks me too, but we have a blanket policy where if I ask she has to show it to me. There’s a difference between me asking and the school asking.) 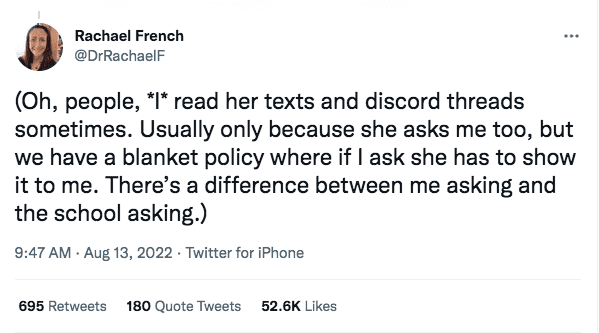 As a mother, I would rankle at the idea that any teacher could insist on invading my child’s privacy.

After all, many of us give our children phones because we need to know they are safe. I don’t want just anyone having access to my child’s data, which includes my data.

I can see French’s point here, but not everyone agreed.

Many pointed out that when it comes to schools intervening and requesting to view a child’s phone, it’s because of bullying or some other emergency.

“As someone who works in a school. This happens due to a report of cyberbullying, harassment or that person posted or sent defamatory pictures of another student without their permission. Everyone is not ok until it’s their child being target. Most happen after school hours.”

French responded, “Then you schedule a meeting with the parents and you ask to see the messages. Or the victim of cyberbullying provide screenshots first. None of this is an emergency requiring an immediate search of a child’s phone.”

One mom who experienced the pain of trying to help her child was being bullied at school did not agree with French that this policy is a terrible idea.

Shans wrote, “Idk about this.. my daughter was being bullied online outside of school hours and the teacher read some of the messages on these devices .. (she’s 10 and has to have a laptop for school) and called the parents concerned and it all stopped .. and I”m grateful for it.”

French doubled down on her take in response, writing, “As others have noted, there are many ways to get that information without thinking you can search their private communications without consent. And my phone (not hers, legally) is different from a school laptop.” 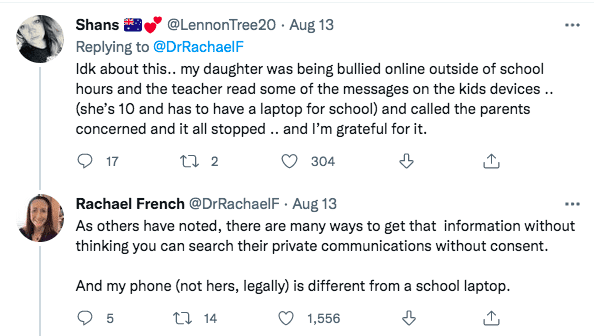 More comments (an avalanche of them) appeared to agree that if a child is being cyberbullied, then allowing the school to access the same technology being used to torture that child makes sense.

French emphatically disagrees, and she kind of has a point.

The emergency is not looking for who to place the blame, it’s to keep that child safe during a crisis.

That said, if there are no other ways to confirm who the perpetrators are, then shouldn’t the school be able to request access to specific texts?

French wasn’t having it.

She wrote, “CW: child suicide and bullying. People, if a child is being cyberbullied and someone told them to kill themselves, the emergency is making sure that child is safe, not immediately figuring out how to punish.”

Shan Muskopf wrote, “Whoa. Also beware of student monitoring apps. They’ve installed software that keylogs student devices. A phone plugged into a school Chromebook can also be monitored. I”m about to go back to a 1999 low tech classroom.”

French responded, “My kid has been instructed never to plug her personal phone into any device already. Just in case and on principal.”

Others commented that maybe kids shouldn’t be bringing phones into school in the first place.

Kin added, “This may seem old fashioned, but kids don’t need phones in school. Keep it in a locker if they absolutely have to have it for AFTER school work or sports. Problem solved.”

French responded that her daughter does do that, but it’s not exactly about kids overusing phones and more about the principle that the school shouldn’t get to call dibs on accessing anyone’s private information with impunity. 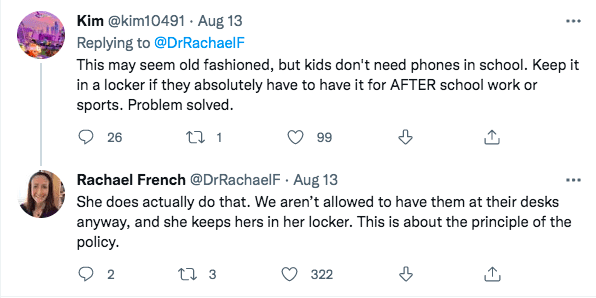 This is the kind of thing that may not ever have a clear boundary.

Keeping kids safe in the era of cyberbullying is absolutely important, but how to do that while respecting privacy?

It’s a tough question and one that we all will have to wrestle with once our kids start using more tech, especially in school.

Every once in a while I like to play a fun little game I call, “When will they notice?” Bonus … Read More

There’s a lot of good info out there, but I feel like something is missing because nobody is talking about … Read More