In a story right out of a true crime podcast, a Southern California woman is accused of allegedly trying to poison her husband.

And according to her husband and police, he has the nanny cam footage to prove it.

Not the reason I’m not married but….??

The Irvine Police Department issued a news release on their Facebook page saying that “an Irvine woman was arrested for poisoning her husband of 10 years.”

“On Thursday, August 4, a resident reported he suspected he was being poisoned by his wife. The victim had fallen ill over the course of one month and became suspicious his wife was responsible for his illness.

The victim captured video evidence supporting his suspicion and turned it over to police.” 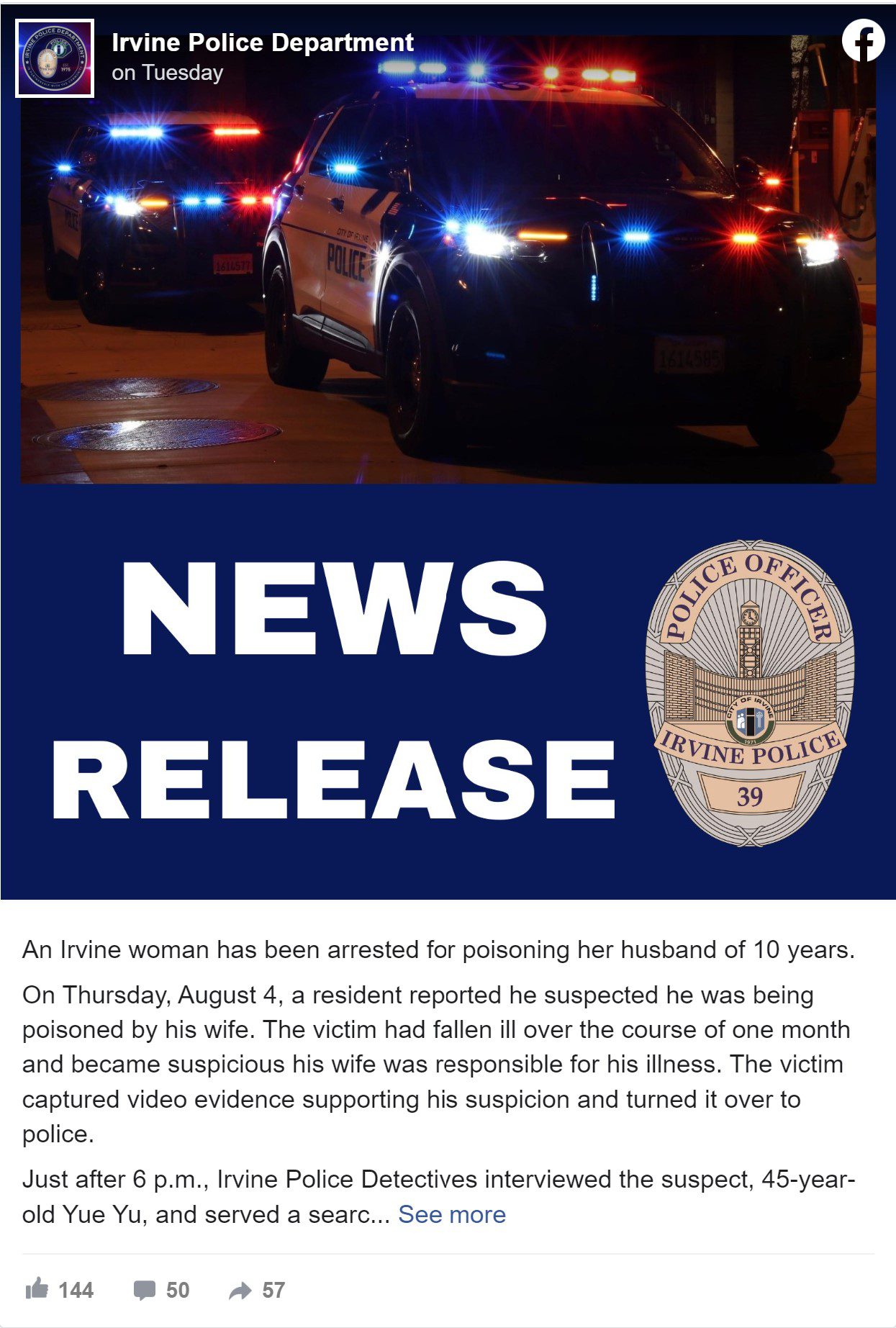 Chen first suspected his wife when he began suffering from unusual symptoms back in March & April.

According to CBS News, “aside from the chemical taste in his mouth,” (no doubt) “Chen was diagnosed with stomach ulcers, gastritis and inflammation of the esophagus.”

He decided to take matters into his own hands and do some sleuthing.

He set up a hidden nanny cam in the kitchen and claims he caught footage of her adding liquid Drano to his glass on July 11, 18, and 25.

According to Yu’s lawyer, however, she was just pouring the cleaning chemical into an empty cup to unclog pipes.

“The idea that my client, who is a 45-year-old well-respected dermatologist in Orange County, would destroy her life, destroy her children’s lives and try to kill her husband is just completely absurd and untrue — and for that matter defamatory.”

Of course, the news has spread like wildfire and people are talking. And because they just can’t help themselves, making jokes.

(Look we know this is serious but this is just how we deal ok?)

And while the idea of a wife attempting to off her husband is shocking, what people seem to find more shocking is that Chen was drinking HOT lemonade.

Hot lemonade is a thing?

People had questions. Mostly about the HOT lemonade.

Who drinks hot lemonade? Also, how could you not think it tasted funky?

But also about, well, pretty much everything. Except for the one not-so-small issue that in instances such as these, your Google history is not your friend. (Said every convicted felon everywhere).

I’ve got plenty of questions about the doctor who attempted to poison her husband by spiking his drink with Drano, but I’m afraid to Google anything about it because who needs THAT shit in their search history?

As for using Drano as a weapon of choice, people were divided.

Some liked the idea, even suggesting it have its own shot name:

Let’s name it Drano on the beach.

Others thought it would pair nicely with a “twist of lemon, spritz of vermouth, and two olives.”

Murder on the rocks, anyone? Or perhaps you’d prefer it shaken, not stirred.

Drano lacks the smooth finish of Liquid Plumr. A caring wife would have known that.

And while Liquid Plumr MAY have been a better choice, there are still better options out there, apparently. Just ask this lady. She knows. (Wonder if we should be concerned about her husband??)

All joking aside, poisoning your spouse is never the RIGHT choice obviously.

So what is the right choice when you’re feeling like “Til Death Do You Part” just can’t come soon enough?

We’ve come up with a few alternatives that won’t see you facing 25 to life.

Of course, you could always just opt to get a divorce.

In all seriousness, murder is no joke. The reality is that we don’t really know what happened in this case or what may have led this wife to resort to allegedly poisoning her husband (although we’re betting all the nitty gritty details will be coming to an episode of Dateline soon.)

And obviously, we don’t condone poisoning your spouse with Drano – which may or may not have happened.

What we do know is that Yu is currently out on $30,000 bail and no charges have been laid as of yet.

According to the Irvine Police, Chen sustained significant internal injuries but is expected to recover.

His marriage, however, will not.

Chen was granted a temporary restraining order against his wife and has filed for divorce (obviously). He is seeking sole custody of the couple’s two children.