So, I thought I’d write her this letter over our mutually painful experience of lightning crotch during pregnancy:

Well, I feel like I grew up with Lizzie McGuire, which, in turn, makes me feel like I grew up with you, too. I followed every awkward encounter Lizzie experienced, while she navigated her way through pre-adolescence. I followed her beautiful, yet sometimes complex, friendship with Miranda. I followed her delicious, and sometimes extremely awkward, relationship with Gordo as it blossomed from friendship to, well, something more (WHICH I ALWAYS KNEW IT WOULD!). I even followed her to Italy in the Lizzie McGuire movie, regardless of how utterly unrealistic the storyline was.

So yes, I feel like we grew up together.

As you’re a celebrity and I’m well, not, I know that we aren’t the same in many ways. However, I recently learned something about you that makes us EXTREMELY alike.

Stay with me here.

You see, I became pregnant with my first (and currently only) baby in 2018. 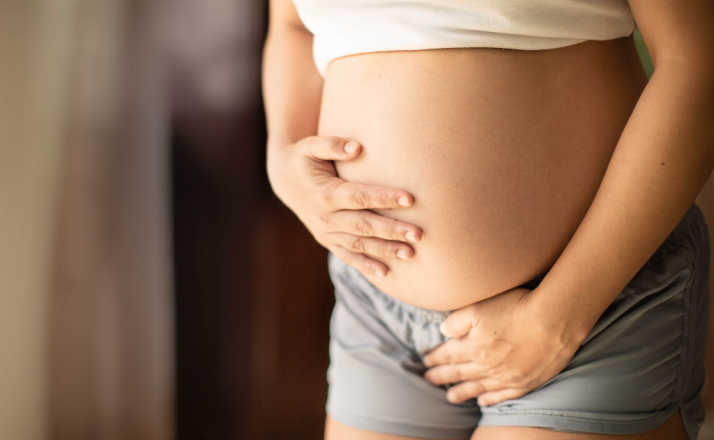 By textbook standards, I had a pretty perfect pregnancy. No complications, no morning sickness, with only some very minor heartburn.

I was able to sleep pretty soundly every night and truly enjoyed being pregnant. Trust me when I say that I absolutely do not tell you this to brag, by any means, but merely to show that in my comfort, I was just asking for it to bite me in the ass in the end.

But instead of being bit in the ass, lightning struck me in the vagina.

Not real lightning of course, but lightning crotch, which I KNOW you’ve experienced too, Hilary.

For those of you not familiar with this term, let me explain. As there is no definitive medical term for this condition, it is referred to as “lightning crotch” because the pain literally feels like a lightning bolt has struck your vagina.

It is an all-consuming, intense pain felt throughout your vagina and pelvis, which can occur depending on where the baby is sitting and the pressure you feel in that area.

I remember waking up one morning, feeling fantastic, and the moment I placed my feet on the ground and went to walk into the bathroom, I was hit with an instant, shooting, and intense pain that took my breath away.

You could also hear an audible pop (I was also diagnosed with round ligament pain).  It felt as if my vagina was actually cracking. With each step I took, “POP!” went my vagina. I felt like a walking Rice Krispies treat advertisement.

The worst part of it all (if there is even a part that’s worse than your vagina popping like a popcorn kernel in the microwave), is that there is absolutely nothing that they can do to make it magically disappear. Sure, there are ways you can remedy it like changing positions, taking a warm bath or wearing a support band, but there is nothing you can do to CURE it.

Nope, the only cure is postpartum.

So, Hilary, I stand with you and your lightning crotch, girl.

As for you, Hilary, I wish you a speedy and safe delivery. I never thought vaginas would bring us together, but here we are.

P.S. Thank you for allowing Come Clean to be the theme song for Laguna Beach, because it was nothing short of perfection.

This morning I got up and had no idea what day it was. I also called my daughter by the … Read More

Single Moms Buy A House Together An…

Remember the tv show, The Golden Girls? (Gen-Xers and Geriatric Millennials, I’m looking at you). The premise of the show … Read More

Woman Crochets the Weirdest, Most 2…

Finding JUST the right Halloween costume can really be a challenge. You want a costume that really represents you- something … Read More