Filter Free Parents
Home Kids I Used To Be The Overprotective Mom, Then My Third Kid Came...

I have a younger cousin who has a child the same age as my fourth little boy. One time, my mom was with this cousin and observed her prodding, herding, and worrying over her little one.

I wasn’t there, but my mom told me later that she used me as an example.

The thing is that I was a “be careful” kind of mom.

I spent the baby and toddler years with my first two children herding and hounding and hovering.

Then along came my third. And I gave up.

I didn’t have enough hands to keep them all safe all the time. Especially with him!

While one of his older brothers needed help to get untangled at the playground or the other brother yelled for me to watch him go down the slide at the playground, my little toddler was climbing mountains out of my view.

I distinctly remember glancing over to see a dad hovering over my little son as he climbed something on the elementary school playground after school that, strictly speaking, wasn’t designed for a toddler and therefore had wide and gaping holes where he could fall to his doom, banging his head on the way.

I felt guilty and anxious about this at times.

I felt embarrassed because other parents could tell I “had my hands full,” and would stand there beside my little boy with hands at the ready.

I often couldn’t tell if they helped from a position of judgment or a position of support, although sometimes I could tell and it wasn’t a good feeling.

As a one- and two-year-old my third was always up for an adventure.

While I was in the bathroom one day, he climbed onto the counter and feasted out of the crockpot with a ladle (fortunately, without getting burned).

He dictated when it was time to move out of the crib because he had figured out how to escape it. This was how I learned that kids are amazingly resilient!

That little boy is not a little toddler anymore. In fact, he’s not even a preschooler.

He will turn eight in a few months and he’s still climbing mountains. 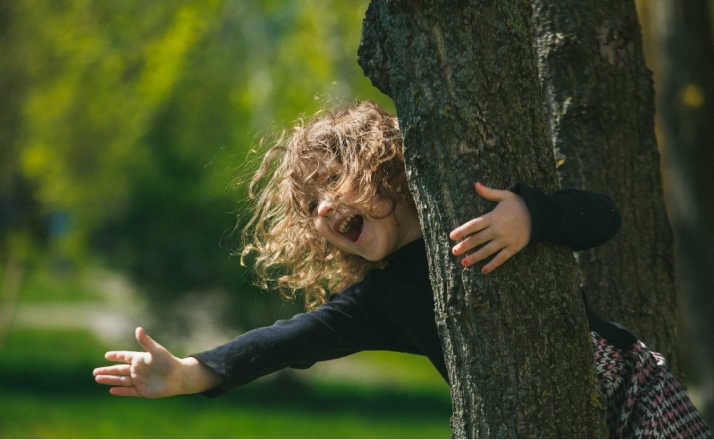 While his older brothers face everything with caution, he jumps in head first.

I can’t say if I’m to blame for their sense of self preservation, because it doesn’t feel far off from their natural personalities, but in moments of honesty I know that I didn’t help.

I think my divided attention when he came along was one of the biggest gifts I could have given him.

So I don’t apologize when I post pictures of my kids doing “dangerous” things. To me, that’s a victory.

I don’t want my kids to get hurt and I do want them to be aware of danger, but the world requires bravery and pushing their physical limitations helps build resilience for other situations.

So nowadays, I cheer them on when they climb a tree.

I root for them as they climb on the tunnel at the playground. And I stand at the ready when they scale the fence to get a tennis ball someone left stuck up in one of the highest quadrants.

Thus, ends this cautionary tale that my mother shared with my cousin. Of course her point wasn’t to be more cautious, but to be a little less.

To trust them a little more. To allow them to go a little further.

Because that’s a recipe for independent, determined, joyful little people. And I would know, because now I have one.