A friend and I were just saying the other day that we are so sick and tired of the news being full of bad people getting away with doing ultra shi*ty things.

And then the clouds parted, my Wi-Fi stopped buffering, and my newsfeed updated with a fabulous story of a bad guy getting his just deserts.

In a viral video posted by the Okaloosa County Sheriff, a Fort Walton Beach, Florida woman and her baby are safe after allegedly getting attacked by someone trying to steal her car.

The incident occurred in a Chik-fil-A parking lot and ended when an employee heard the woman’s screams and came racing out of the restaurant, body slamming the asshat with the stick to the ground.

In a previous post, the Okaloosa County Sheriff described the scene and included what appear to be mug shots of the alleged carjacker.

“A young employee outside a Fort Walton Beach area restaurant rushed to help a screaming woman holding a baby this afternoon after a man grabbed her keys and tried to take her car.

The Okaloosa County Sheriff’s Office has charged 43-year old William Branch of DeFuniak Springs with carjacking with a weapon and battery,” the post read.

The woman was getting her infant out of her car seat at the Chik-fil-A when Branch suddenly appeared, carrying a stick and demanding her keys.

According to the post, Branch then grabbed the keys from the woman’s waistband, opened her car door, and got into the car.
The woman (understandably) began screaming for help.

“When the victim began screaming for help an employee at Chick-fil-A ran to intervene. Branch punched the young man in the face but the second victim was not seriously injured.

The employee says Branch had been involved in another incident shortly before the carjacking attempt,” the post read.

Luckily for us, we get to watch the now-viral video of that employee body slamming Branch to the ground before getting surrounded by a small crowd of people.

In reference to the FWB Chick-fil-A employee who ran to help a woman with a baby who was being carjacked, we want to say a sincere thank you to Ms. Kelner for providing video of a portion of the encounter. (see prior post). A major shout-out to this young man for his courage! pic.twitter.com/2Lcwe46azv

So, who was the hero who dropped everything to swoop in and save the day?

It was a young man named Mykel Gordon. Olivia Iverson, an investigative reporter, took to Twitter, writing, “This is the HERO!” 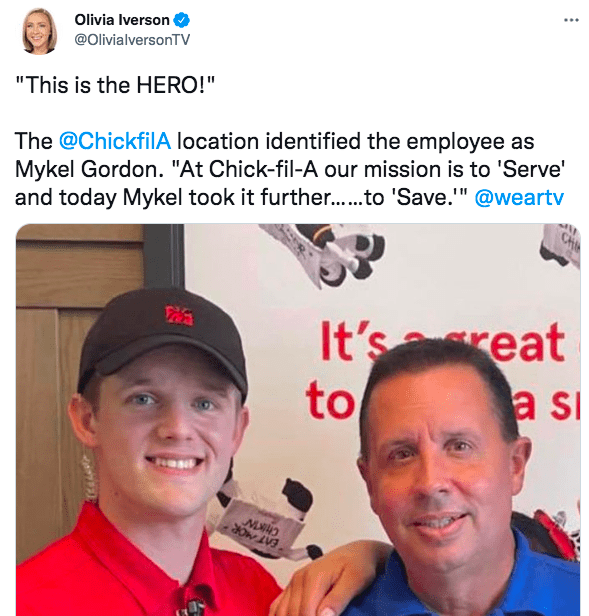 According to the National Insurance Crime Bureau, there are 35,000 carjackings in the US each year, and more than 75% of them include a deadly weapon such as a gun or knife.

Experts agree that no car is worth your life, and while no one would ever want to be carjacked, should you ever find yourself in such a situation, there are several things you should do to stay alive.

According to NBC Chicago, a city that is no stranger to carjackings, the following are steps you should take if you are being carjacked:

In the meantime, we sure hope that Gordon got a day off from work to bask in the glow of much-deserved praise.

After all, it’s not every day that a Chik-fil-A employee has to body slam a bad guy and save the day. And his amazing efforts didn’t go unnoticed by the police.

A commenter on Facebook asked the Okaloosa County Sheriff’s Office how and when they would award Gordon for his incredible actions.

The Sheriff’s Office responded by writing, “We would certainly foresee that happening!!!”

There is no word yet on what an award or public recognition will look like, but whatever it may be, we sure hope Gordon feels the love.


A Scientist Dad Finally Figured Out…