Filter Free Parents
Home Mom Life Humor Is There A Support Group For Parents Shopping With Teens? Because There...

I vividly remember carefully curating my baby registry when I was pregnant with my first daughter. Thoughtfully picking out the cutest onesies and itty-bitty socks and a mélange of obnoxiously large bows and headbands. I LOVED dressing her.

She was like my own little doll. She gleefully cooed and wore whatever I picked out for her without batting a little baby eyelash.

Then she turned two and it came to crashing halt.

From there I was no longer in charge of her wardrobe. A closet of amazing clothes and all she wanted to wear school were tattered Disney costumes and rainboots. There is no reasoning with a toddler and frankly, I didn’t care as long as she was happy.

It would all work out and she’d come around soon enough to tap me once again as her personal stylist. At least that’s what I told myself.

I pictured campy shopping montages set to pop music, in my head as we skipped around the mall holding hands and perused the racks while giggling and high fiving.

I created a narrative in my head not ever knowing that it was a huge work of fiction. From there it only escalated each year as she navigated her own personal style.

And then I blinked, and she was a tween, and I was trapped in the horror that is Justice.

It’s like the gateway into teen shopping hell. I found myself paying $40 for a kid’s sweatshirt.

More than I spend on any of the leggings assigned to you when you become a mom.

I would walk through that store with hangers cutting into my arms carrying 12 variations of the same sweatpants mentally preparing to see the sticker shock of the trip as I frantically used my free hand to search for coupons in the app they made me download to earn “rewards”. But they’re always expired or not applicable yet.

Shopping with teens is like being caught in the full-price purgatory of your nightmares.

Then as you go to pay, they have displays of strategically placed junk that every kid relentlessly begs their parents for as you’re waiting in line for the one register checkout. Unicorn headphones, shitty lip gloss, keychains, earrings, diaries, candy.

It’s like an obstacle course of crap and there’s no way around it as I’m trying to avoid getting smacked in the face from her arms flailing mid Tik Tok.

I’m like the mom version of Keanu Reeves in The Matrix as he’s bobbing and weaving in that iconic scene to avoid getting maimed. The greatest reward Justice ever actually gave me was when my daughter basically aged out of their clothes and I could move on. 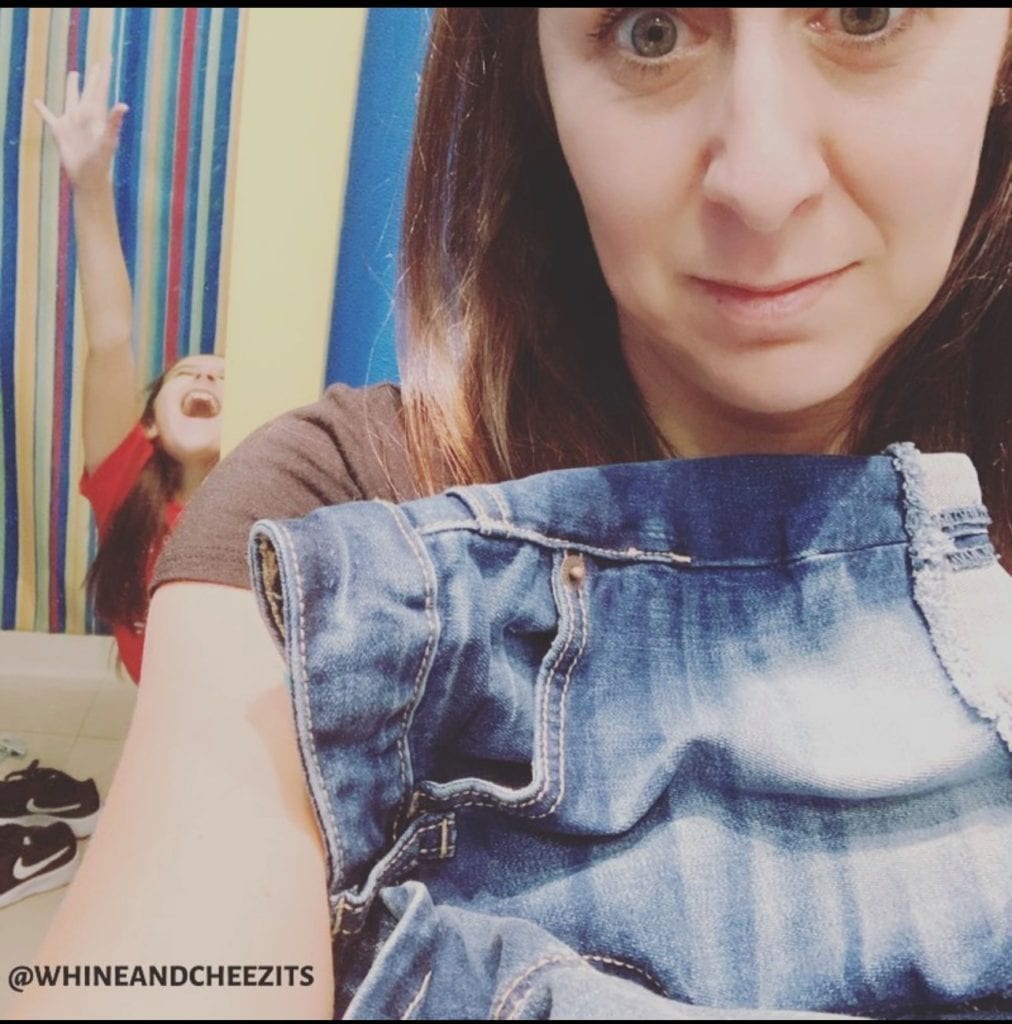 But it’s only downhill from there because once you graduate (In)Justice as I like to call it, you move on to Abercrombie & Fitch.

The clothes are as expensive, shorter, tighter and with the added bonus of walking through a store while you are nasally assaulted by the painfully strong cologne.

It’s like walking into the bathroom after a 15-year-old boy has just discovered Axe body spray, times eleventy trillion.

And why does the music have to be so loud?? I can’t hear my kid without repeating, “WHAT?!” a handful of times.

Oh, and it’s also so dimly lit that if you are in your 40s, like me, you’ll need to have your readers and phone flashlight ready to decipher the price tags.

This is the store where I was educated on the teen demographic’s love for graphic tees, they actually have zero frame of reference for.

My daughter begged for a Rolling Stones T-shirt because they’re “on trend”.

So, I’m all like, “Ohhhh, you like the Stones?!” to which she looked at me like I sprouted a second head and said, “Who?” She asked for two shirts and I sarcastically sang, “You can’t always get what you want” and she didn’t get it but still got the shirts.

I walked around with her and picked out cute items for her to try on and she rolled her eyes, said “Ew, mom” or made gagging faces.

Everything I picked was unacceptable because I can’t possibly have style.

She keeps calling me a boomer even though I have explained to her that’s factually incorrect. But now my eyes are starting to tear and burn on account of the cologne wafting through the air.

I’m starting to feel faint and need to get the hell out of here. I power through and make it to the cash register and have just enough strength to pull out my credit card and barely see the total on the screen because the smell is making me hallucinate.

Like what is happening? Did someone slip mushrooms in my Starbucks because I feel woozy?

I think they should offer oxygen masks upon departure to us boomers so we can flush out our lungs from the garbage cologne pollution that has entered our bodies during the shopping experience.

Is there a support group for parents shopping with teens? Because there should be.

But we escaped and that’s all that matters. Who cares that my daughter’s wardrobe only consists of Rolling Stones tongue tees and tie-dye sweatpants? I hope they fit forever so I don’t have to go back anytime soon.

I want her to wear them under her cap and gown when she graduates. And then I realize that’s why many of us just buy the shit we said we wouldn’t buy – TO GET OUT AS QUICKLY AS POSSIBLE with all of our senses still intact.

Teens are also fluent in irony when it comes to shopping with a parent.

Like for example, everything I picked out was “disgusting” but as soon as we get home, she walks out of my bedroom wearing MY sweatshirt. The mind games y’all.

Shopping with a teen is not for the faint of heart. I know that it’s because teens know absolutely everything, and we are mere morons.

But I’m hanging on, waiting for that moment when we graduate from Abercrombie and she’s forced into shopping in some of the same stores as me while I try and talk her into matching outfits and don’t need prophylactic Advil after leaving.

My time is coming. I just know it.

Lego Now Lets You Donate Your …