Filter Free Parents
Home Relationships Marriage I’ve Turned Into Such A Nag Because My Husband Never Helps With...

I’m tired of being my husband’s mother. How did I turn into such a nag?

The weekend I moved into my husband’s house before we were married, everything seemed to be great.

We wanted to start fresh, so I went to town cleaning the entire place and adding feminine touches where possible. Only after I was finished did I realize that my husband hadn’t really been cleaning anything at all.

In fact, he made tidying up somewhat more difficult by leaving stuff laying around the house.

“We haven’t really talked about dividing up chores,” I told him one night. He shrugged and didn’t say a word.

Eight years later, it’s pretty clear how my husband felt about sharing the burden with me.

He didn’t want any part of it. Believe me, I’ve tried that trick of just letting everything pile up so he gets sick of it and helps me. That failed miserably when I discovered he didn’t really seem to notice that much.

We have an ongoing debate about our sliding glass door that leads out to the patio. Our landlord warned us never to smoke inside the house, so when we go out there, we need to slide that door closed so smoke doesn’t get in. It’s been completely frustrating because my husband never ever slides the door all the way closed.

I’ll ask him to do it only to watch him slide it halfway or three-quarters of the way closed. He seems to have a mental block about this as if he doesn’t like being nagged and is acting out being rebellious.

The thing is, I absolutely hate to nag.

I don’t like women who do that, but it’s what I’ve turned into to get anything done. Meanwhile, our house smells like disgusting smoke, and it’s just dumb luck that the landlord hasn’t stopped by.

I don’t want to be my husband’s mother.

My husband has a job, but I also have a job.

He works full-time where I only work part-time, so I understand that I’m the one who has more time for cleaning. I’m fine with that except when it feels like he’s working against me, leaving a mess on something I just cleaned. 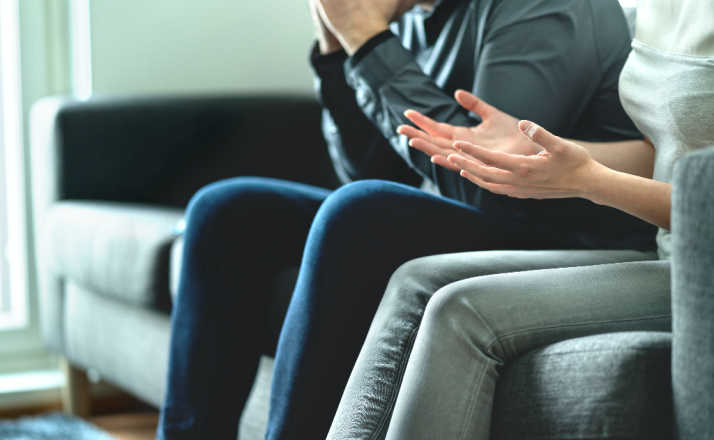 Part of it is my fault because it’s just easier to pick up after him rather than wait for him to do it. I wonder if I’ve trained him to be this way by doing everything that needs to be done to keep the peace; however, there is no peace when I start to feel resentful.

I really try not to complain or nag him about things.

Maybe that’s part of the problem, but I refuse to play the bitch in this situation. He can roll his eyes at my requests all he wants, but I’m not going to be part of him making me a nagging wife. I’m a middle-aged, vibrant, loving woman who never wanted to be compared to any man’s mother.

Nagging my husband only seems to make him shut down entirely, and then I feel bad for asking.

I actually do love my husband to the ends of the earth.

Nothing would make me happier than to spend every day of the rest of my life with him. I want him to always look at me with admiration, lust, and love. There is nothing sexy about having to constantly bother someone about what to do in their own home.

He’s a grownup, after all, and he also has eyes. He sees clearly what needs to be done. He just doesn’t seem to feel like doing it.

Once I read an article that said cleaning the house is a blessing that a woman performs for her family. I really try to look at it that way.

Taking care of people is something I generally like to do, especially the people I love, but I don’t want to hear it from my husband about why something hasn’t been cleaned or washed yet. The thought never crosses his mind to do it himself.

On the rare occasions that he does, he lets me know how put out he feels about it. He doesn’t think it should be his job and resents it.

There’s that whole “man of the house” concept that I have always thought was bull. Just because someone has a Y chromosome, it shouldn’t exclude them from participation. There are many women who work full-time yet take care of everything at home. It’s the perfect recipe for burnout, which is how many women feel these days.

Some men clearly believe certain things are “women’s work.” These guys should know that women resent being put in that position. This is 2021, and it’s time for them to grow up.

My husband is pretty near perfect, but he seems to have a blind spot when it comes to this subject.

I can continue to live with that, but I don’t necessarily like it much. I never signed up to be a parent to my own husband. I’d like him to see us as equals who help each other out, but I can’t force him to feel that way.

Unless he has some sort of revelation, it looks like things will stay the same. Should I just accept that?

Believe me, I love being a mom to my three children, and I love being my husband’s wife. I just don’t want the roles to get confused.