In 2004, 24-year-old Melissa Stockwell was a Second Lieutenant in the Army when she was deployed to Iraq. Three weeks after she arrived, she was leading a routine convoy through Baghdad in an unarmored Humvee.

Suddenly, a roadside bomb exploded, hurling Stockwell and her vehicle through a guardrail and into a house.

She woke up at the hospital and learned that she had lost her left leg, eventually transferring to Walter Reed Army Medical Center in Washington, DC for rehab.

Fifteen surgeries and about as many years later, Stockwell is showing her appreciation for all of the medical staff who helped her over the years by starting the Frontline Appreciation Group of Colorado Springs.

Every week for the past six weeks, Stockwell has loaded up her SUV with as many snacks and restaurant gift cards as she can stuff into the cargo area delivers them to hardworking medical personnel.

She calls it Snacks for Superheroes. 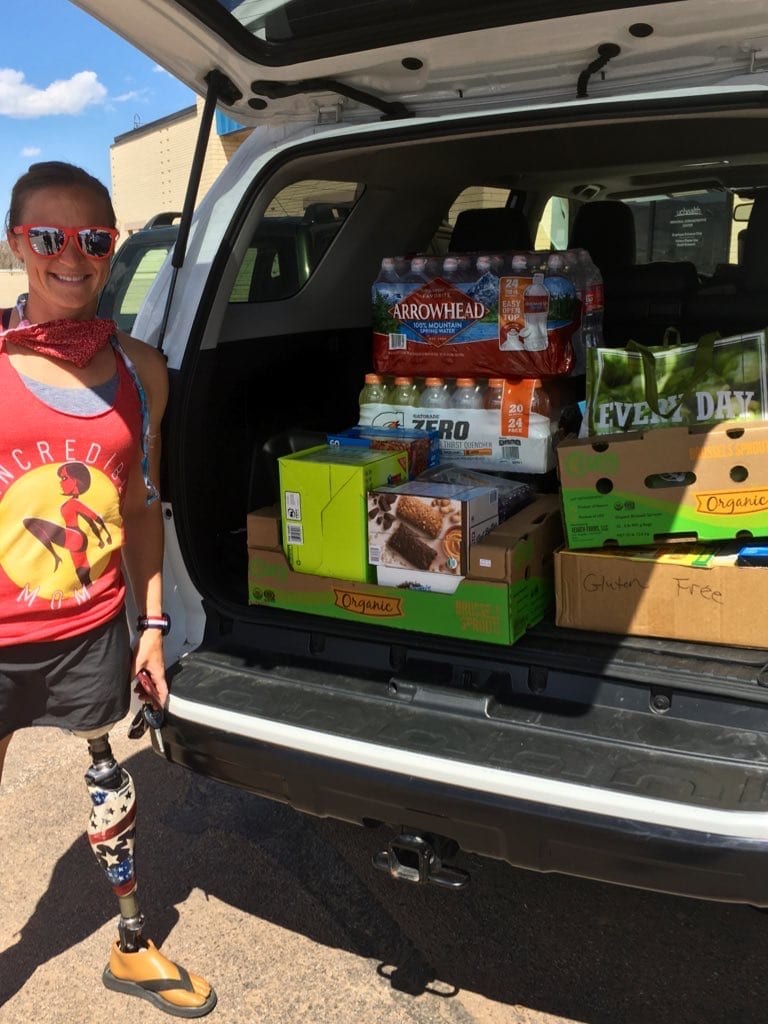 Now a mother of two young children, Stockwell felt a pull to help as the pandemic spread across the country. She is a superhero herself, the recipient of a purple heart and bronze star for her heroic service in combat.

On top of that, she became a two-time Paralympic triathlete after learning to walk again, and a three-time World Champion.

It’s a very small thing to do, she says, but it makes her feel like she’s giving back a little bit. Why snacks?

As it turned out, when Stockwell made a few calls to find out where she could contribute, she discovered that the staff was inundated with full meals, which was helpful. However, when they’re very busy, no one has time to stop and eat a meal.

That’s where the snacks come in. 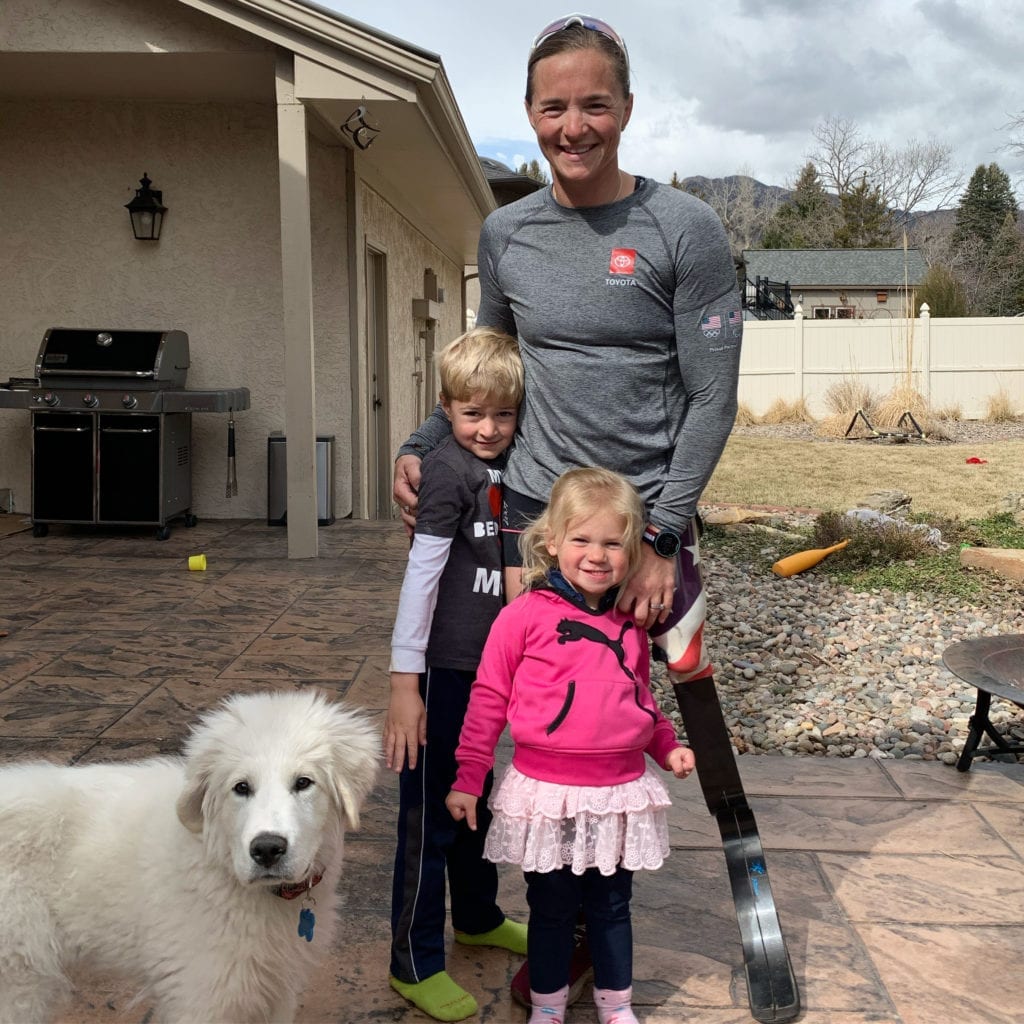 Stockwell’s five-year-old son is getting into the action too, helping her pack the snacks and makes signs and thank you notes.

“You always want to teach your kids to be kind and help others,” she says. “I hope it sits in a little for him.”

She’s been setting an example for a long time now.

While at Walter Reed, Stockwell noticed soldiers who were missing much more than she was, and from the start she considered herself one of the lucky ones.

“I only lost one leg and I still had my life,” she says.

“I wanted to live my life for those who gave the ultimate sacrifice; I felt fortunate, and wanted to see how much I could do with three good limbs.

When I heard about the Paralympics a few months after my rehabilitation at Walter Reed, I knew I wanted to do it.” 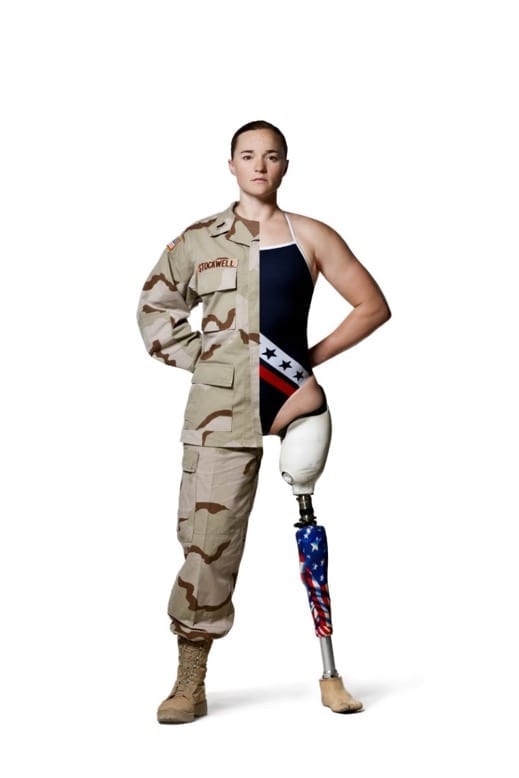 Losing her leg in Iraq inspired Stockwell to become a prosthetist; today, she and her husband own a prosthetics company and they help others adapt to life without one or more limbs.

Together, they’re raising their son and a two-year-old daughter (who isn’t old enough to help pack the snacks but likes to help eat them).

Before the pandemic, Stockwell was up early to train at the Olympic Training Center pool. Her husband brought their kids to daycare and then she would pick them up and put on her mom hat, make dinner, and spend time with her family.

She’s a triathlete – swim, bike, and run – but because of the quarantine, she hadn’t been in the pool in over a month.

“I dream about the smell of chlorine,” she says.

The Team Toyota Paralympian is training, parenting, delivering snacks to superhero medical teams, serving on the board of the Wounded Warrior project, and she made time to write her own biography.

It’s called The Power of Choice: My Journey from Wounded Warrior to World Champion, and Stockwell says it is about choosing to persevere and to triumph over tragedy. 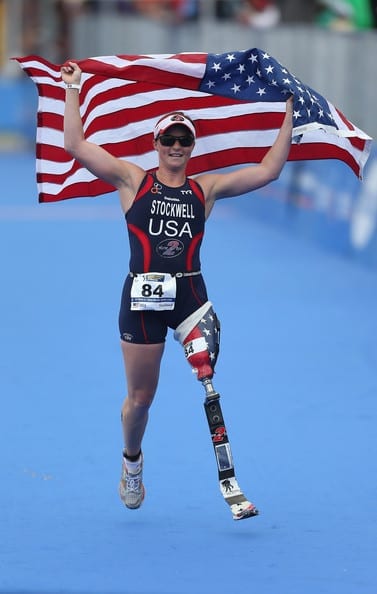 “It’s my own story about how I chose to take losing a leg and turn it into a life where I’ve done more with one leg than I ever would have done with two,” she says.

This busy mom also co-founded a nonprofit organization called Dare2tri, which helps athletes with physical disabilities get into the sport of triathlon.

Stockwell travels the world, sharing her story in hopes to inspire others and help them see that they have the power of choice, regardless of what obstacles come their way.

As she continues providing snacks for superheroes in the Colorado Springs hospital community, she is raising money, training for 2021, and using her time for good.

“People are more appreciative of medical personnel than they’ve ever been,” Stockwell says. “Why not keep it going as long as I can?”

Kate Beckinsale Is Relatable A…