Filter Free Parents
Home Relationships Marriage Kids Are Hard on Marriage, That’s Why Get Away From Them

Our two-year-old is having nightmares. Either that or she’s feigning fear in an effort to completely manipulate us into 87 hugs, four more stories and what’s becoming the longest bedtime routine in the history of mankind.

Our eight-month-old still doesn’t sleep through the night. We’ve tried it all, but for whatever reason we were blessed with not one but two children who can’t seem how to figure out how to sleep all night before their first birthdays.

And yes, you read that right. We have a two-year-old and an eight-month-old. Life around these parts is best summed up as a whole lot of love and a generous dash of insanity. Or as the farmhouse chic sign on our bathroom shelf reads, “Some people call it chaos, but we call it family.”

And as much as my husband makes fun of my Hobby Lobby find, it’s the God’s honest truth.

Chaos. Sometimes organized. Most of the time not.

Between two full-time jobs, our two bundles of joy and almost no sleep, chaos is about the only word that adequately describes this season.

And we love it. Truly. Even when little, sticky hands are literally pulling our hair out. Even then.

But chaos eats up time. It takes over hours and chews up and spits out days.

It leaves you chasing your tail – or in this case, other, much smaller, much faster tails. 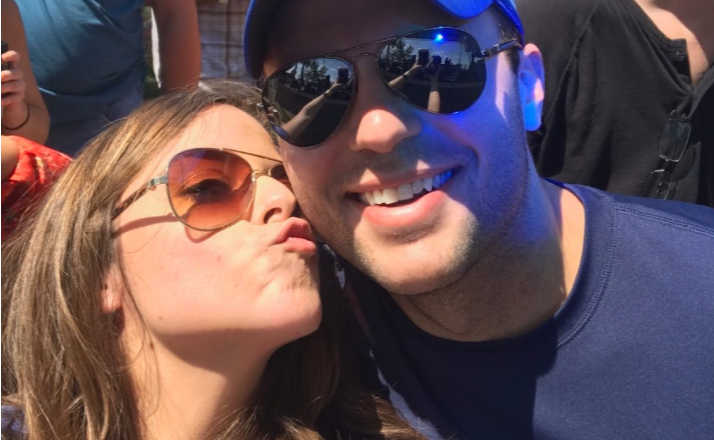 Chaos doesn’t care that you’re tired, or that you haven’t had a full night’s sleep in 97 years.

It doesn’t mind that you’re running on fumes, or that the kids are sick and you have a deadline at work.

And if you let it, chaos can start to divide. It can turn romantic partners into tag team firefighters. It can take you from man and wife to man-to-man defense like that.

One of the most honest admissions I’ve ever heard since becoming a parent was this: the years spent raising young kids were the hardest in our marriage.

And can I tell you how freeing it was to hear another person say those words out loud? Holy cow you guys, I thought it was just me. Just us.

But that honest friend wasn’t lying. This season, at least for our marriage, has been tough.

We’ve either been pregnant, postpartum, or caring for an infant for the past three and a half years. It’s been over three years since we had normal sleep patterns.

And I know they say your partner should come before your kids, and I believe that and agree wholeheartedly.

But my partner can feed himself. He can go to sleep by himself. He can bathe, and change himself, and he knows not to eat a wicker basket or crawl straight into the fireplace.

So, while I would love to put him first in everything, put our marriage first always, sometimes I just can’t. Sometimes every single ounce of my attention is on two toddlers intent on climbing furniture and eating dead bugs. It’s just a fact of our chaotic life right now.

They need so much attention, so much of us around the clock.

And I’d be lying if I said it hasn’t been a struggle, and that our relationship hasn’t been treated like my morning coffee: eagerly anticipated, much desired, but left for cold time and time again because other things keep screaming for my undivided focus.

But it started to get to me. I mean, who genuinely enjoys cold, forgotten coffee? No one. And what do you do when your coffee gets cold? You stick it in the microwave to warm it back up.

Lean in now, because I’ve got a secret for all you parents of littles. The microwave trick works for your relationship too.

But I get it. Sounds great in theory, but how do you really focus on your marriage when you’re running ragged around little bitties at home?

I’m not saying it can’t be done. You can squeeze in quality moments almost anywhere if you want it badly enough. A little intention goes a long way. A simple google search of at home date nights will send you down a rabbit hole of ideas, box subscriptions and printables designed for people like us – people in the trenches of parenthood.

And while they can be fantastic and life-giving, those moments are often brief and cut short by someone crying or the desperate desire to get to bed before someone starts crying.

So, for us, the secret to defeating a cold coffee relationship – to building a thriving marriage in the thick of raising little kids – is getting away from them.

A weekly, out-of-the-house date night isn’t realistic for us right now. But we do try to go at least once or twice a month. And now that we don’t have a newborn, we shoot for at least one, preferably two, adult-only overnight getaways a year.

And you guys, it’s been a total game changer.

Having something on the calendar to look forward to is a huge help in breaking through the monotony.

It gives us a chance to be man and wife again, not just mom and dad. It allows us to have conversations that aren’t about our kids or interrupted by our kids. It lets us eat a full meal in peace, and occasionally, sleep in.

It refreshes our souls, and allows us to slip back – even temporarily – into easier days when things were simple and our relationship was fresh and always on the front burner.

So, if you’ve been drinking it cold for some time now, I feel ya. But please, for the love of Starbucks, put that stuff in the microwave, sister.

Save up for a babysitter, call in a favor from grandma, trade childcare with friends. Get out of town, or go down the block for a quick dinner.

It doesn’t have to be extravagant, but I promise you, once you start making your relationship a priority again, consistently, you’ll be amazed at the difference it makes.

And if you’re in the deep, deep trenches, like the brand-new baby that you can’t possibly imagine leaving for a second trenches, hang on, girlfriend. Your day is coming.

So, here’s to hot coffee and hotter marriages. Because life’s too short to let either one go cold.

This post originally appeared on the blog, Daylight To Dark