She had just fallen asleep. Rag-doll tired, I call it. You couldn’t have paid me $500 to keep her awake; there was no possible way.

She would have fallen asleep standing up, but instead, I let her rest her face against my chest.

This was a nap, not an early bedtime.

Who lets their two-year-old nap past 6 PM? A crazy woman, definitely.

Who does this a few times a week? An absolute lunatic.

You can imagine, of course, that this mid-day slumber ensured “bedtime” would be a bust. What bedtime, really? We’re a little all over the place.

My husband and I both remember summer evenings from our own childhood – falling asleep on the couch or our parents’ bed, but still…

This isn’t what I envisioned.

I imagined that when she was this age, I’d tuck her little blanket under her little chin (I guess we have central air in this vision) and sit at her feet and read from The Little House treasury. It was a paradise, really.

We’d have already had a snack, bath, and picture books. She’d be too little to understand the storyline, of course, but she’d be just sleepy enough to close her big green-gray eyes and allow the prairie imagery to lull her to sleep; when she would be old enough to read it on her own, then, it would all come back to her, and each chapter would feel a little closer to home.

In this perfect bedtime routine in the perfect world, the clock would say 8:30 or 9, maybe, and I’d slip away and do some writing or make a cup of green tea or tidy the kitchen.

She would stay in her own bed while I answered work emails and paid the bills and loaded the dishwasher.

She would sleep through those hours when I would be productive downstairs, meal prepping, folding laundry, maybe sweating my butt off on the elliptical (we also have a home gym, apparently, in this vision).

But this? Today? This week? This isn’t the bedtime paradise I envisioned.

Maybe we have found ourselves in this routine, or lack thereof, because I haven’t really tried hard enough. A lot of moms would tell me this, and okay. Okay.

Maybe we’ve found ourselves in this haphazard bedtime charade because I didn’t insist, with enough persistence, on a regimen.

Or maybe it’s because she’s like me, thriving on very little sleep, refusing to prioritize it when there is any potential for productivity or excitement. 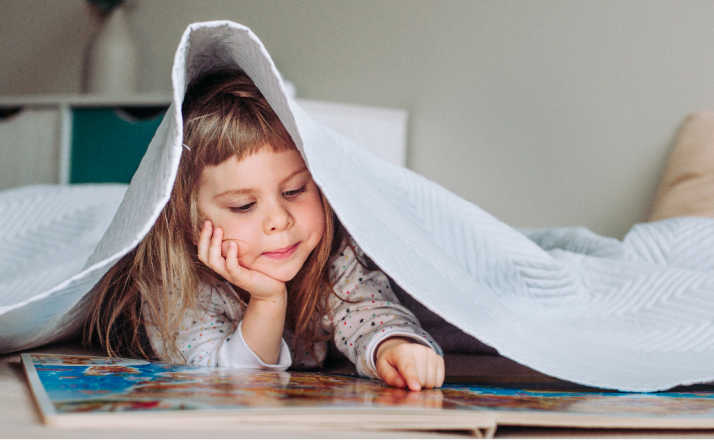 Maybe we’ve found ourselves in this nightly predicament because I go with the flow a little too much.

Am I lazy? Am I crazy? Anybody – everybody – will tell you children need routine, but what happens when your child just can’t settle – almost ever? I know what my pediatrician would say.

I know what a sleep coach would say. I know what some of you might say.

But what happens when you do try a routine – a certain brand of bubble bath, an aromatherapy rice-bag stuffed bunny you can heat in the microwave, a certain book – and they STILL can’t settle?

I bought the doll that has a heartbeat.

I made the Shutterfly blanket with each family member’s face on it. I tried to play The Dixie Chick’s ever-soothing Lullaby (the last time I did this, she hit skip on my phone, and “Born to Be Wild” came on next; you know I’m not making this up because I couldn’t make this up).

What happens when you say “no sweet treats or screen time after 6 PM” and “let’s run around the yard with the dogs all afternoon until you’re tired” and “let’s put some lavender lotion on your wrists” and STILL they can’t settle?

I’ll tell you what happens, if you’d like to know.

I’ll tell you what happens, especially if it’s 11:30 PM and you still have to take the trash down or you still have to answer two emails or if your head is pounding or if you still have to make a cheeseball that’s to be ready the next morning: you turn on Peppa Pig, or you give her more milk although she’s already brushed her teeth, or you say “Let’s snuggle in my bed”, or you let her play with her dolls on the living room floor until you realize she’s asleep next to them.

Am I doing this perfectly? Absolutely not. But have I tried every possible wake-up time and nap formula? Absolutely.

There’s been too much effort on my part for me to feel any logical amount of guilt over this.

Altogether, I believe children crave structure and routine. As a teacher, I know this more than anyone.

However, I believe some require it more than others.

Our routine is waking up and hanging out and loving each other. For now, that will do. I’ll admit much of this started during the spring, when I was working from home full time. If she was sleeping, I had no choice but to let her sleep and continue moving down my to-do list.

This was moms everywhere; I know you understand this reality.

Am I encouraging a little free spirit? Or am I harming her beautiful, tiny little growing brain by depriving her of the sleep her body has to need?

Is this paleo parenting, letting her eat when she’s hungry and sleep when she’s tired?

By the time she’s school-aged, I imagine, we’ll have worked out the kinks.

The more regimented schedule will naturally ensure she’s exhausted at bedtime and that she sleeps soundly in preparation for the adventure that awaits her on the other side of the night.

While I will admit that I do still feel both guilt and concern over this stage and this aspect of my parenting, I have to consider what I would tell another mother: you do you.

You are in survival mode, and you just go ahead and survive. If you are loving that baby as fiercely as you can and doing what you feel is best, moment to moment, you’ve gotta be doing it right.

In 15 years, when she takes her SATs (if they’re still a thing?), I’m not going to say, “I’m sure she’d have scored higher had she taken more regular naps as a two-year-old.”

But – in 25 years, when she’s a nurse volunteering to take third shift or she’s an artist who wakes up and paints in the middle of the night, or she’s sitting at her own kitchen table with a cup of coffee at 2 AM, studying for heaven-knows what type of certification exam, I will say, “Ah, that’s my girl. I could have guessed.”

This is not what I envisioned. But you know what else I didn’t envision?

That she’d be counting to ten and singing her ABC’s already.

That, upon getting stung by a yellow jacket, she would say “Oh ow, bee” instead of crying hysterically.

That she would love under-ripe peppers and raw string beans and eat cucumbers whole and have a taste for all things green and earthly.

That, upon tasting Nutella for the first time, would say, with the throaty enthusiasm of a middle aged woman after three glasses of wine, “Oooooh I LOOOOVE it. Mmm, mmm, mmm.”

That her charming tenderness would compel her to say “I missed you s’much” each time I walk back into a room I’ve just exited.

It’s better than any paradise I could have imagined, even if there is no bedtime in that land.

There’s somebody out there whose child will only eat potato chips for dinner on Tuesdays (maybe he’s a good sleeper).

There’s somebody whose child’s speech is still developing (maybe she’s a good eater).

There’s somebody out there whose child is in a won’t -look -at -books -for -more -than -three -seconds stage or refuses to share right now or is obsessed with some bizarre and godforsaken YouTube video of a truck running over an egg in slow-mo (but I betcha he’s a good sleeper AND eater AND talker, isn’t he?)

This one is for you, mamas. How reassuring it is to know that if you’re loving them right, there’s little you can do wrong. Sure, accidents happen and bad days happens and some of these evenings are positively never-ending, but you’d never believe how much you’re doing right.

School Board Calls 911 After Angry …

We’ve rounded the corner into year two of living with Covid-19. It’s been a looooong year of wearing masks, buying … Read More