Filter Free Parents
Home Informative My Five-Year-Old Black Daughter Was Accused Of Having A Gun In Her...

The principal called Monday at 10:30 a.m., saying there had been a “situation.” Over the weekend, she had received an email from a parent who stated that the Friday prior, my 5-year-old daughter had told a kindergarten classmate she had a gun in her backpack.

The student hadn’t mentioned anything to the teacher when the alleged incident occurred. By the time I received the call about it three days later, the principal and the teacher had only addressed the situation with both girls separately. No punishment was planned, the principal said, but she wanted me to be informed.

My mind flashed to my baby girl, wearing the bright butterfly T-shirt she proudly picked out because it matched her rainbow beads. I tried to imagine her talking about firearms.

Then, out of the corner of my eye, I caught a glimpse of our “kindness elves,” the merry house guests who visit every December and bring the kids surprises like stickers and gum for doing kind deeds.

It clicked. My daughter hadn’t said gun. She had said GUM.

Thirty minutes later, my hypothesis was confirmed. I stood in the front office at school and pulled the red Santa-adorned roll of Hubba Bubba Bubble Tape she had been so excited to receive out of the side pouch of her Pottery Barn backpack.

Eight days shy of her 6th birthday and she’d already been accused of a crime she didn’t commit.

Sure, when you’re a child, misunderstandings happen.

But when you’re a Black child in America like my daughter, misunderstandings, even over something that wasn’t your fault, can also be deadly. See: Trayvon Martin.

I should say that I have great respect for the school’s principal and teachers and I truly believe they were acting in what they thought were the best interests of their students.

I also understand that everyone was following protocol and that all threats of gun violence must be addressed abruptly.

A worried mom heard the word gun. Then, in a world where mass school shootings make regular headlines, sent an email to the principal. The principal followed up. The teacher had the tough conversations.

But when forces like these combine and no one stops to think about the implications of an accusation like this for a Black child – a kindergartner, no less – that’s where the problem comes in.

Because I know the statistics.

School shootings are almost overwhelmingly perpetuated by white males and almost never black females. And yet, in Austin, where we live, schools suspend Black students nearly five times as often as white students.

In fact, in 2017, Texas banned most out-of-school suspensions for children in pre-K through second grade after studies showed that Black students, males, special education students, and children in foster care were being disproportionately disciplined that way.

Statistics also show that as early as age 5, Black girls are viewed by adults as less in need of nurture and support. As well as more knowledgeable about sex and adult topics, and as significantly older than white girls of the same age. 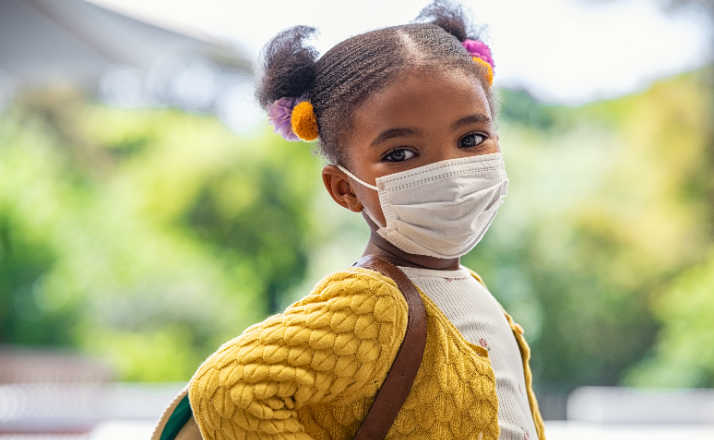 If my daughter’s school had called me before asking her about the gun scenario, I could have explained that she was talking about the gum her elves brought her.

I would have also told them you will never see my children with guns, even Nerf guns or water guns on a sizzling 100-degree day. Not only due to my family’s position on gun control but also because when you’re a Black or brown child in America, even holding a fake gun can get you killed. See: Tamir Rice.

As I thought more about the word protocol, I questioned if it was possible to even have protocol for a situation like this. I felt certain that no similar accusation had ever been made against a white kindergartner at our predominantly white elementary school.

And further, I wondered, would anyone have believed my daughter when she said she didn’t have a gun if I hadn’t marched up there and waved around a roll of Bubble Tape?

What I want to know is what’s the protocol for protecting Black kids in the school system?

For teaching their non-Black counterparts that pointing at the darkest-skinned kid in the room and making a false accusation about a weapon can actually get that child killed?

As a white woman and a transracial adoptive parent, I’ve made and continue to make my share of mistakes. And of course I’ll never know what it’s like to walk in my children’s shoes.

But mistakes or not, we have to keep addressing racism and calling it out. Because, from where I’m sitting, it’s terrifying. And many of the perpetrators look just like me. See: Amy Cooper.

I don’t know the parent who sent the gun email personally. But I know that in my middle-class suburban neighborhood, it can be hard to know who to trust.

Like the woman who regularly hashtags #blacklivesmatter. And then promptly deletes my emails imploring her to ask her son to stop telling my daughter that her hair looks like poop at recess every day.

Or the mom who shared links on Facebook about the Ahmaud Arbery trial. Then quietly hosted a birthday party and thought my daughter wouldn’t notice when she was the only girl in the class who didn’t get an invitation.

It’s not just my neighborhood. It’s everywhere. And no matter if it’s explained as protocol or polite ignorance or knee-jerk fear, it’s systemic and it’s deadly.

So fellow white parents, instead of telling me how heartbroken you feel or how much this hurts to hear, explain to your kids that the consequences of accusing a Black child of something they didn’t do can be grave.

Read Emmanuel Acho’s “Uncomfortable Conversations with a Black Boy” to them and talk through every single chapter.

Volunteer with your local justice coalition and attend their events and marches with your kids. Even better, make monetary donations to them, too.

And no matter what, please don’t hide under the excuse that your children are too young to talk about race.

If my kids can live their lives talking about and being directly and devastatingly impacted by racism, yours, no matter what their age, are old enough to learn about it.

Sadly, one day, something as simple as a roll of gum or a pack of Skittles may land my daughter in a dangerous situation. The lessons you teach your kids could mean the difference between her life and death.