You know all those jokes about how a mother’s “inner bear” will come out if someone threatens her cubs? Well, one dirtbag who got caught spying on a 15-year-old girl found out the hard way that the Mama Bear phenomenon is very real.

On Thursday, a Lake Jackson, Texas mom became an internet superhero when police dashcam footage caught a mom running, tackling, and holding down a man that was allegedly trying to peep through her daughter’s bedroom window.

The police had already been called (hence the dashcam footage) and the suspect took off on foot, evading two Lake Jackson police officers.

The mom, however, was not messing around.

In the footage, we can see her comforting her daughter, and then suddenly, she runs out into the road, blocks the suspect, then throws his ass to the ground.

Damn. That mom is amazing!

“I figured the least I could do, get him down, trip him up, whatever, they’d have a chance to get caught up,” Phyllis Pena told reporters at KPRC2, a Houston-based news team.

“My first instinct was to make sure he didn’t go any further,” Pena said.

“My kids are my life, you know, just, making sure I protect them, pretty much,” she told reporters.

Police Sergeant Rory Welch was impressed. He told KPRC2, “It was a pretty good tackle.”

The suspect is 19-year-old Zane Hawkings and thanks to this fast acting mama, he was arrested at the scene.

“It’s not very often that we have somebody that steps in and puts themselves in harm’s way to assist in apprehending somebody,” Welch said.

Welch wasn’t the only one impressed by Pena’s tackle.

Her moves have lit up the internet with many humorously speculating that she could be the linebacker Texas is currently looking for.

Twitter, in particular, has been having too much fun with this story.

This Twitter user is well aware of how tough moms can be.

This Twitter user wants to get Pena on the field stat. 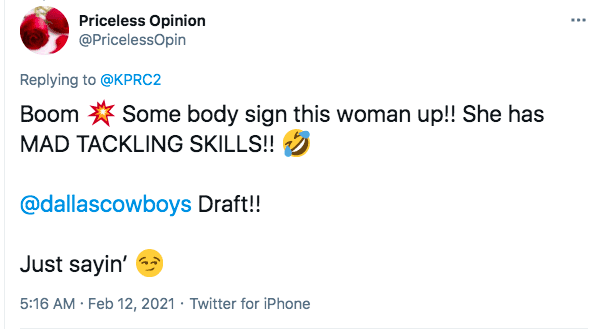 These two Twitter users got into a tiff over Pena’s form.

Meanwhile, these two Twitter users are enjoying getting their football nerd on.

But all kidding aside, the fact that a man was trying to spy on a girl in broad daylight is actually pretty damn horrifying.

Thank goodness Pena was there. KPRC2 reported that Pena’s daughter knew who the suspect was although she apparently did not know him personally.

Hawkins was booked by police and charged with possession of a controlled substance, evading arrest, resisting arrest, and may face more charges soon.


Prenatal Test Results May Be Wrong …

I was thirty when I had my first child. It was both a welcome surprise and quiet longing for that … Read More