Tiktok may have started as a platform for people to share fun dances and hilarious clips, but it’s quickly become infamous for really stupid viral challenges. Insert the new and disturbing “Devious Licks” challenge. Which has nothing to do with licking, apparently.

Teens, in particular, with their still undeveloped prefrontal cortexes, love to do extremely dumb shit and post it where it is seen by millions of other teens who happily jump on board the TikTok craze-y train.

Kids are stealing school supplies, like soap and paper towel dispensers, toilet paper rolls, and projectors, and posting their “treasures” on TikTok.

Perpetrators film themselves pulling the stolen school supplies out of their backpacks with a variation on the phrase “first day of school copped a devious lick.”

Some students have really upped the stupidity ante and are now stealing sinks, mirrors, toilet stall doors, dividers, toilets, and yes, even urinals.

Mashable reported that class pets, Smartboards, desk chairs, and even entire filing cabinets, are all fair game. The harder the heist, the more devious the lick.

And OMG, am I the only one really worried about the future of humanity right now?

My daughter said all of the mirrors were gone out of the boys’ bathrooms. All. Of. Them. How did they remove a giant mirror and get out of the school with it!?

That’s what we’d like to know. Like, no one notices a toilet bowl walking down the hall? No one?

According to Know Your Meme, the “Devious Lick” trend began on September 1 when TikTok user @jugg4elias posted a clip showing himself taking a box of disposable masks from his backpack with the caption:

“A month into school absolutely devious lick. Should’ve brought a mask from home. Now look at you walkin round campus maskless you dirty dog.”

The video garnered over 345K views before being deleted.

A week later, another TikTok user, @dtx.2cent, posted a video of him unzipping his backpack and pulling out a hand sanitizer dispenser that he allegedly stole. The video was viewed 7.2M times in just 48 hours before being removed.

He captioned it with:

“Only a month into school and got this absolute devious lick.”

It snowballed from there.

Last week TikToker @oskarsoskar claimed they “won this trend” when they pulled out 2 COVID antigen testing kits from their backpack, adding them to a huge pile of previously stolen tests.

As of Monday, the hashtag #deviouslick had gotten more than 175 million views, according to Mashable.

TikTok has attempted to get a handle on the heisters and has removed all clips associated with the hashtags #deviouslick and #devious. Instead, it has replaced them with the following message:

This phrase may be associated with behavior or content that violates our guidelines. Promoting a safe and positive experience is TikTok’s top priority. For more information, we invite you to review our Community Guidelines.

However, the damage has already been done.

Schools across the country are asking students to refrain from participating in the challenge.

Several of them have taken to social media, posting to their Facebook pages, to get the word out. 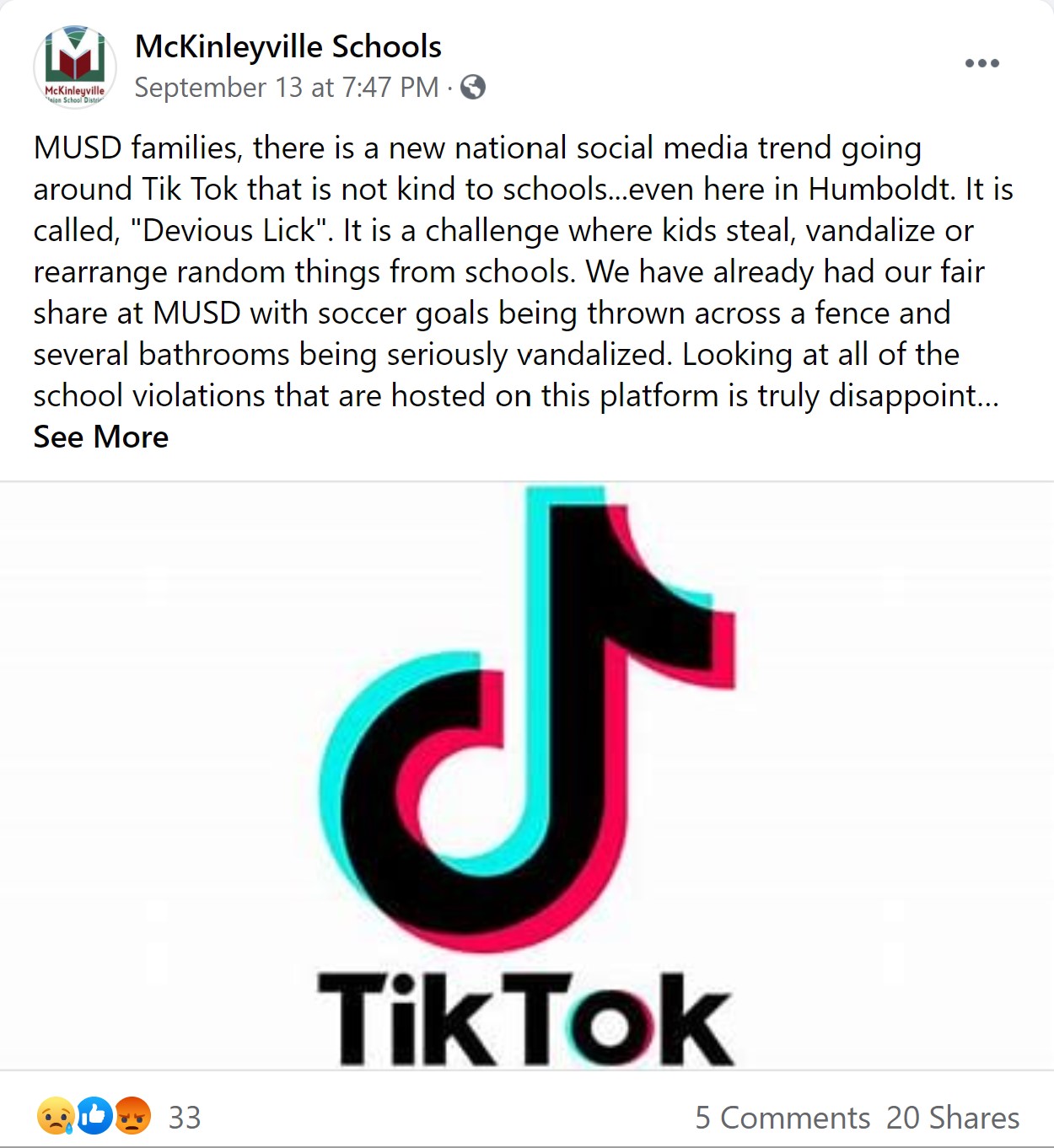 Additionally, emails like the following, are being sent to parents, stating in part:

“A recent problematic trend has arisen on the Tik Tok social media platform, wherein students film themselves stealing items from or destroying school restrooms and other facilities.

Within the last week alone, we have seen a significant spike in vandalism at several school locations and damage done at almost every jr. high and high school.”

These acts are being taken seriously, and perpetrators will potentially be criminally charged.

This is not a harmless prank. It is not a joke. Licks for likes is larceny and it’s costing schools thousands of dollars in damages and lost property. And it’s happening everywhere.

In a video that is quickly going viral, our own Meredith Masony had this to say about the challenge:

Over 1K people have commented and clearly, Masony’s daughter’s school is not alone in their fight against this trend.

Other parents came forward to reveal what is happening in their children’s schools. 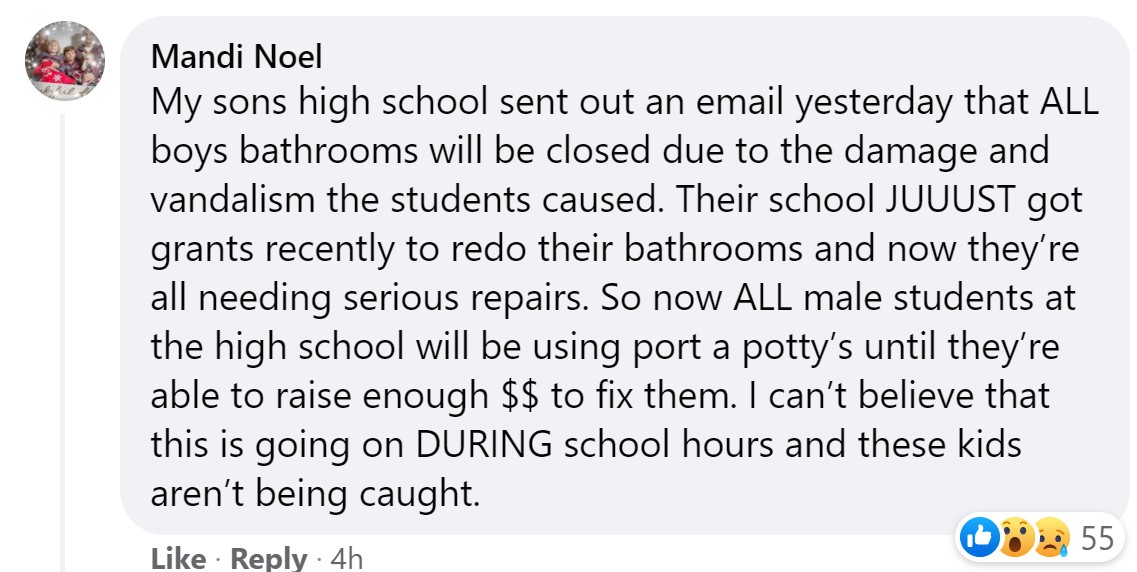 While they aren’t all resorting to locking the bathrooms or port-a-potties, some of them have taken measures to ensure that their soap and paper towel dispensers are safe.

Other schools have decided to implement an “incentive” to get the students to speak out against the thieves. It worked.

As for who’s really at fault here? It’s clear that not everyone is placing all of the blame on the kids. 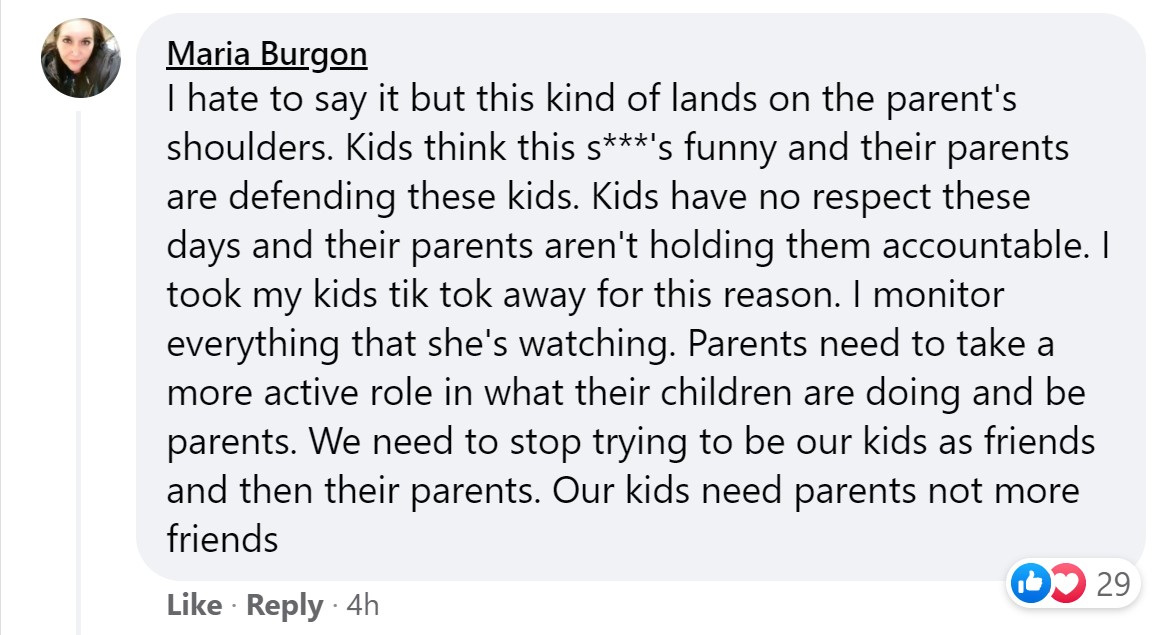 Regardless of where you want to place the blame – TikTok, teens, parents, lack of values/morals – the reality is, challenges like this one NEED TO STOP.

Kids have been doing stupid things forever. It’s our job as parents to guide them in making smart choices. Devious licks? Is not one of them.


Snakes In Christmas Trees Are A Thi…

Realtor Lists Property As “A …

We all know how crazy the real estate market is right now. The pandemic lockdowns left many people spending far … Read More