Filter Free Parents
Home Mom Life Mom Is Angry That Her Adult Child Got a Job and Can’t...

Do you ever find yourself looking for petty drama online to distract yourself from the horror show that is the current news cycle? I’m a huge fan of scrolling through TikTok or binge-reading weird threads on Reddit for this very reason, and one of the best places to find 100% petty distraction is the famous AITA subreddit.a

What is AITA? If you don’t know what AITA is, buckle up because this will be a wild ride.

AITA stands for “Am I the Asshole?” and the subreddit bills itself as a fun way to get things off your chest and then get judged by strangers.

AITA describes itself as “A catharsis for the frustrated moral philosopher in all of us, and a place to finally find out if you were wrong in an argument that’s been bothering you.”

One mom recently posted to AITA to see if she was in the wrong for getting angry that her adult child, who is enrolled in college, got a job and can’t babysit his siblings for free anymore.

“The other day I found out that he found and accepted a job without telling me. I was upset with him about it and the reason for that is that first of all, he should’ve told me since we live in the same house and also, and more importantly, now I’m left without someone to stay with the girls from 3 to 8 where my shift start-ends.

My son is usually the one to stay home with the girls and his new job is during these hours so one way or another we are impacted,” her post reads.

AITA for being upset with my son for finding a job without telling me? from AmItheAsshole

The mother goes on to explain that she and her husband both work and her adult son usually watches her two daughters.

Ok, so it sounds like there are five people in this family, and they all live in the same house — including the college-aged son.

She also indicates that something happened that might have been traumatic because her daughters don’t seem to want a babysitter, they just want their older brother.

The son’s position here is that he’s an adult and in college and it is perfectly normal and acceptable that he would want to get a job and begin saving his own money.

Makes total sense to me.

Is anyone else thinking that this sounds an awful lot like this mama wants a free babysitter?

The post has attracted more than 15K judgments and nearly 7K comments, the end result? This mother is an asshole, according to the Reddit AITA rules.

The number one comment, with 50.2K upvotes (that’s Reddit speak for “I agree with this comment) came from user Solid_Quote9133 who wrote, “YTA (You’re the Asshole), he isn’t free child care. He has his own life, he needs to live and what is doing is bettering himself for the future. You need a better plan than forcing your kids to babysit for no money.”

To add a little bit of nuance (and major sarcasm) to the discussion, two Redditors chimed in with a hot take that the mother is leaning on a weak argument to justify her feelings.

One user called highseptone22 wrote, “but I fEed aNd HoUsE hIm.” To which another user, Smallest Monster added a hilariously snarky, “AnD aCtIvElY dIsCoUrAgE hIm FrOm GeTtInG a JoB sO i CaN mAiNtAiN mY oWn CoZy LiFeStYle wItH fReE cHiLdCaRe.”

Now, if you’re a rational person, you might see these last two comments and think, “Huh, interesting thread, case closed.” But you’d be wrong because one of the best arts of AITA is the wild (read: addictively fun to read) theories that emerge in comments.

Take this gem for example: 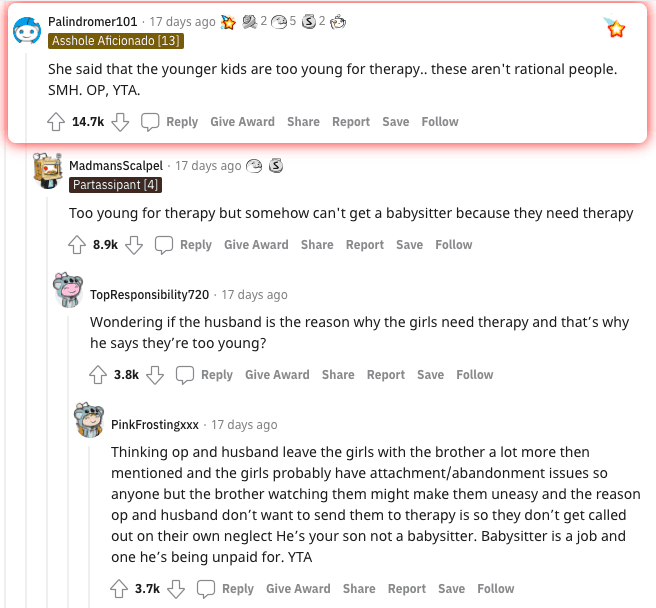 Commenters couldn’t help themselves: they had to at least try to read between the lines when the mom tried to explain that her daughters can’t get a babysitter because they might need therapy but they are too young for therapy.

User PinkFrostingxxx broke it down with this sleuth comment,

“Thinking OP (original poster) and husband leave the girls with the brother a lot more than mentioned and the girls probably have attachment/abandonment issues so anyone but the brother watching them might make them uneasy and the reason op and husband don’t want to send them to therapy is so they don’t get called out on their own neglect He’s your son, not a babysitter. Babysitter is a job and one he’s being unpaid for. YTA.”

Whatever your hot take may be on this particular story, you will likely find some fun company in the comments section.

To read the full story, head over to Reddit. But don’t say I didn’t warn you: AITA is addictive.