As a child of the 80’s, the brand name Gillette immediately called to mind its sing-song slogan: “The Best A Man Can Get!”. The razor company has long been known for being virtually synonymous with archetype masculinity, and it’s now looking to challenge our definition of what masculinity should represent- for the better.

Gillette’s latest short commercial film is winning massive accolades for its welcome redefining of what “masculinity” really is, and what it isn’t… and the video is pretty damn moving in illustrating the point, too.

The clip, entitled “We Believe: The Best A Man Can Be”, features a variety of scenes that depict situations involving bullying, sexism in the workplace, sexual harassment, and the traditional “boys will be boys” mentality. 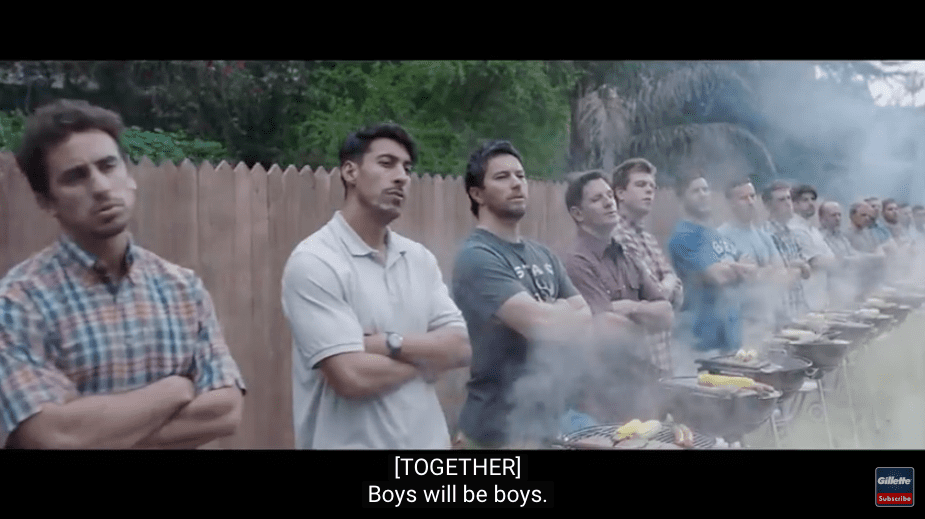 As the scenarios unfold, individual males are filmed staring soberly at themselves in a mirror, as the question is posed:

The scenes are examples of what we’ve come to term as toxic masculinity, and we’re all fed up with that bullcrap. So is Gillette, apparently, & the brand is clearly conveying that men not only are capable of behaving far more decently to both their peers and the opposite sex, but that they absolutely should be!

As the clip’s narrator points out:

We can’t hide from it. It’s been going on for far too long. We can’t laugh it off.

In the era of the #MeToo movement, it’s finally coming across that men can still be men without harassing or abusing women. And the Gillette clip drives the point home that:

Men can still be men by being respectful to fellow men.

Men can still be great men by challenging themselves to stick to a higher standard of decency than some of them currently do.

And men can also inspire the current generation of boys that are looking to them for cues on how a “real” man treats those around him.

That’s not to say that the video clip has had a unanimously positive reception. Many of the complaints lodged on the video’s YouTube page were from viewers that felt that the ad automatically depicted all men as toxic bullies, or that it was bashing the majority of its consumers.

Kinda missed the point, dudes (and dudettes, for the women that agreed)…

As Gillette’s North American brand director Pankaj Bhalla pointed out when interviewed by The Wall Street Journal, the clip’s intention is not to bash men, but “aiming to inspire change”.

We want to hold ourselves to a higher standard, and hope all the men we serve will come along on that journey to find our “best” together.

Do ALL men behave in stereotpyically sexist, bullying ways? OF COURSE NOT.

Are all men guilty of displaying toxic masculinity? Again, of course not. There are countless men that display masculine character in exemplary ways.

But let’s face it: if toxic masculinity didn’t exist, there’d be no need for a #MeToo movement in the first place, am I right?

And the sad thing is, there appears to be no end to the stories that have come forward as a result of the movement.

There’s clearly been a problem, and Gillette should be applauded for challenging it’s customer base to, as Bhalla eloquently put it:

inspire change by acknowledging that the old saying, “Boys will be boys” is not an excuse.”

Rather than merely “bashing” men, as some critics have claimed, Gillette is inspiring its customers to consider -to really, deeply ponder- if their treatment of other people is truly making them the very best men that they can be.

Now, that’s a slogan worth buying into.