I remember having toddlers. The number of things we needed to pack just to visit friends and relatives, the constant waking in the night, surely this was the hardest part of parenthood.

“Just wait,” my sister-in-law, a mom to teens, said at the time, “the teen years are the hardest.”

She was the only one who was honest with me. Every other parent to teens I ran into made it seem as though parenting would and did get easier with teens.

You are in the thick of it they would say. It gets better they often promised.

Teenagers were easier because they were more independent and needed less and we as parents would too. Once our children grew, we would require less support from other parents.

The Mommy support groups from the toddler years didn’t follow me into the teen years.

The mommy groups I joined when my kids were young, the ones that helped me figure out which bottle caused the least gas, which phases would pass and offered support during the early days of parenthood, did not follow me throughout the years.

I didn’t need that same level of support anyway, I convinced myself. My kids were older, they got themselves on the bus, made breakfast, could stay home alone, and needed me much less.

What I didn’t realize as my kids entered their teen years was that I would need the support of other parents even more.

While teenagers are more independent, they need their parents just as much, though in different ways and for different reasons. If you are a parent to a teen or a gaggle of them, you already know this. 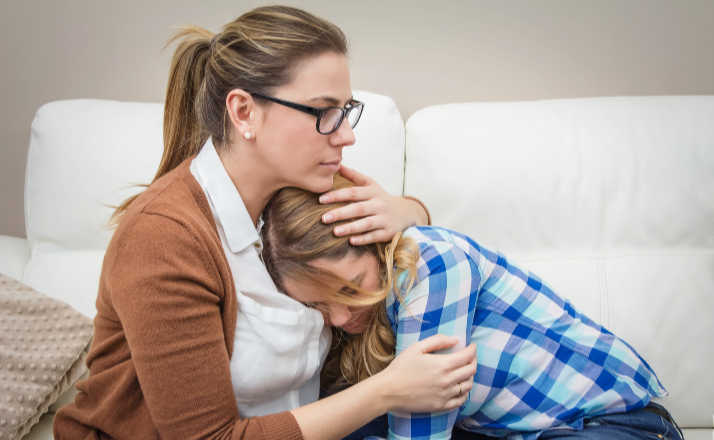 The teen years find parents (and their teens) struggling with major life choices and issues. The burgeoning hormones and changing bodies of puberty, teen sex, drugs, learning to drive, body image issues, complex friendship shifts, and a million other confusing things not only make parenting teens difficult but lonely.

We also encounter issues we’ve never dealt with and they can have dangerous and often lifelong consequences for our kids.

This is scary and intimidating, though for some reason we talk parenting teens less.

While there are many sites and groups offering support to brand new parents, parents of toddlers, etc–teen sites aren’t as plentiful.

Parents also seem to stop sharing as much when their children become teenagers. It may be because teens no longer want their parents sharing every intimate detail of their lives with friends or it may be difficult for parents to reach out without feeling judged.

My teens have struggled with things that I haven’t always wanted to share for both of these reasons.

Maybe we feel as though, by the time our kids are teens we should be able to go it alone.

After all, we’ve been doing this parenting thing for more than a decade. But that’s the problem, it never gets easier, not while we try to raise decent and kind humans that may someday do the same.

And when we forget to talk to each other, to connect, to share the difficulties of parenting teenagers, it’s lonely and confusing. There is no shame in admitting that teenagers are hard and parenting them shouldn’t be done alone.

It’s okay to ask for help and offer it. Parenting takes a village, even and especially when raising teenagers.

This Site Will Tell You Exactl…


According to TikTok Trend, April 24…

TikTok can be a very fun place to hang out, even for us hopelessly antiquated side-parting/skinny-jean-wearing folk. It has tons … Read More

While the focus of the world has been on Covid for the past 18 months, another epidemic has been silently … Read More