Along with being the famous mind behind the theory of evolution, Charles Darwin was also the father of ten children. However, despite anything Wikipedia says, I remain irrevocably convinced that he surely must have been off cavorting with giant turtles during all ten of his wife’s pregnancies.

My evidence? There is literally nothing about pregnancy that supports the theory of evolution.

I am currently 20 weeks pregnant with my second child. I can tell you first hand that if Darwin had witnessed anything like what I have experienced, this whole “survival of the fittest” theory of his would never have made it past the brainstorming phase.

For you non-nerds out there, the theory of evolution is based on the simple idea that an animal (or human) possessing traits that make them more likely to survive will live long enough to pass those traits down to their offspring, while the others with less desirable traits will be more likely to die before procreating.

Basically smart or strong things use their assets to outlive (and outbreed) their slow or stupid counterparts, slowly bettering the species. So far sounds logical, right?

Nope. Why not? Because pregnancy.

For those of you who haven’t witnessed a pregnancy up close, it’s a lovely time full of delightful symptoms. 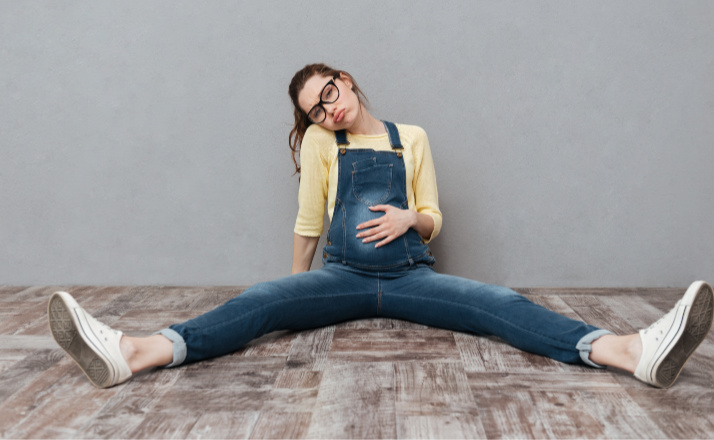 Early on in pregnancy, these symptoms include a level of fatigue that makes narcolepsy appear as quite an appealing alternative, hormonal surges like you haven’t seen since puberty, and an alarming proclivity toward spending large amounts of time hunched over a toilet.

As pregnancy progresses, you add in a variety of sharp and incapacitating pains (due to the literal rearrangement of your skeleton) that the doctors laugh off as normal even though they mimic the symptoms of a serious spinal injury and feel just about as pleasant.

Finally, during the last phase of pregnancy you complete the slow yet steady transition from a functional human (complete with the ability to walk up the stairs without pausing on the landing to gasp for breath and chug a sports drink) to the stunt double for a clinically-obese hippoptamus.

In case you haven’t already figured out where I’m going with this, none of these traits really screams “this would help me survive in the wild”.

Let’s take one first trimester symptom as an example…

For the entirety of my first trimester, I lived 90% of my waking hours in that maniacally-tired state that usually only exists when you wake up in the middle of the night and try to convince yourself that you don’t actually have to go to the bathroom that badly, out of sheer desperation not to leave bed.

I’m talking about the kind of tired that necessitates a small break between legs when putting on your pants or an internal pep talk before you attempt to get off the sofa.

Forget running from predators or sprinting to catch prey. I now choose where I take the kids for lunch based on what had a drive through because walking in to pick up my pre-ordered food was simply too daunting of a task to even fathom.

To put it simply, if there was a sabre toothed tiger anywhere within a 100 mile radius of my location, I would have been the easiest snack on the menu.

And so it goes with each and every pregnancy symptom.

There is nothing “evolutionarily beneficial” about constant nausea, chronic fatigue, or an ever-increasing body mass that reduces your normal gait to a solid waddle.

Running from predators? I’m only halfway through my pregnancy and I can barely outrun my toddler when she makes a break for it at the park.

I am currently coping just fine in my modern day, predator free, Uber eats dependant lifestyle, but only just.

There is not a single day in the last 20 weeks of my life in which I would have been capable of walking long distances to gather nuts and berries or catching even the most slovenly of prey. What about preventing my active toddler from wandering off and getting eaten by something large and toothy? Forget it. She’s cute, but she’d have been lion bait long ago.

In short, I have no idea how any pregnant females survived the stone ages long enough to give birth.

Hypothetically, under Darwin’s theory of survival of the fittest, the “unfit” pregnant humans (read: me) would have been eaten by wolves immediately. Those of us with chronic fatigue who are literally limping due to the abrupt fetal reallocation of their spinal column wouldn’t have lasted a week.

This was obviously not the case.

So what does it mean that everything about pregnancy flies in the face of evolutionary theory? I have one, simple alternative hypothesis:

Pregnant women are a force to be reckoned with and should be treated with the appropriate levels of terror and respect.

Seriously. The men are babies when they get sick stereotype’ is often talked about, but it’s much less common to hear a full description of just how awesome of a force women are.

We all know that many women take care of kids, hold down a job, and take care of the household at the same time.

So on top of all that, I now add another piece of evidence to the record: women manage to literally create life, battling an evolutionarily damning set of pregnancy symptoms, and we do so without neglecting our other nine hundred and fifty seven daily tasks.

Yes, I am checking my work email while I watch my toddler at gymnastics class, but I’m also turning toast into a skeletal system. You’re welcome, humanity.

What does this change? Probably nothing.

You’ll still get to wake up tomorrow morning and try to wrestle your newly-elephantine bulk into your stretchy maternity pants in time to pack the kids’ lunches and email out a deliverable for work before you leave for carpool, but you should do so with the additional self esteem boost that you are a darn marvel.

It should not have been possible for pregnant women to survive in the times of hungry sabre tooth tigers prowling around our primitive villages, but somehow we managed. And that, kids, is why the human species is still in existence: the sheer badassery of women.

According to the U.S. Census Bureau, almost a quarter of all American children are growing up in a fatherless home … Read More