Baby Number One came in pre-COVID times. My front door was revolving with friends, family, and neighbors. Each coming to express their congratulations, often bearing gifts or meals, and always always offering to hold the baby.

Baby Number Two came a short while after. While the number of guests was fewer, I always had family around. Some even stayed with us to help as I recovered from my second c-section and adjusted to life with two under 16 months.

My mother and mother-in-law Mary Poppins’d around my house, cooking, cleaning, and of course were always willing to hold the baby.

Long-awaited and much-anticipated Baby Number Three came just as the heat of summer broke, during what I hope is the only pandemic I will experience in my lifetime.

Everything I’ve heard about the third child is true, and then some. He is the calmest, the best sleeper, and arguably the sweetest. He literally self-latches.

But by the third baby, life happens a bit faster, the c-section recovery lasts a little longer, and the lack of sleep hits a little harder.

I had the sweetest newborn alive, and two bigger balls of energy who had been quarantined together for six months and unable to keep their hands off each other, 97 things to do at every given moment, and no one to hold the baby. 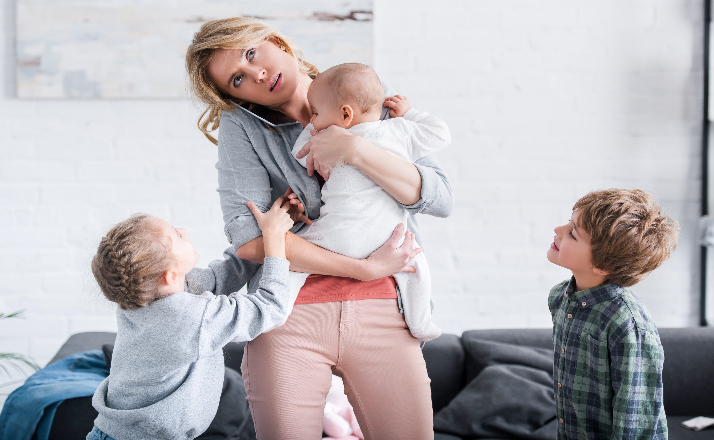 In all the newborn classes I took at the hospital, there was nothing about how to boil hot dogs, make grilled cheese, or scramble eggs while holding a baby. Either because they figured that content wasn’t relevant to moms-to-be, or it wasn’t a safe practice so they shouldn’t promote it.

I wish it were something they had covered. Because when I had two hangry toddlers to feed and a newborn with zero neck control, it was certainly relevant to me.

Even though 80% of the reason we had Number Two was to play with Number One, as a parent of toddlers, I can never fully escape playing with the two of them.

First, I know it’s good to promote parent-child interaction while they are adjusting to having a new sibling. And also if I don’t, they can be whiny AF and after being awake the majority of the previous night, I’m not here for it.

At the time, it would have been nice to place him in the loving arms of someone else. But, when I think back, I’m truly glad I couldn’t.

As only third-time mothers know how to do, I soaked these moments in myself. Knowing that in the blink of an eye, he is a month old, and then a year.

And before I know it, he will be chucking bouncy balls at my head while yelling “suuuuper throw!” Not because he is bad, but because he’s four, and that’s what 4-year-old boys do.

And although I will love him just as much, I know when that time comes, I would give anything in the world for a chance to hold that baby.

*This post originally appeared on Sammiches & Psych Meds and is shared with permission.

Woman Gets Pregnant WHILE Pregnant,…