Filter Free Parents
Home Mom Life Humor The Real Reason Why Your Kids Are Angels For Their Grandparents (But...

Raising children is exhausting, so YOU SEND YOUR KIDS TO THEIR GRANDPARENTS’ house so you can catch a desperately needed break. They later return them to you, singing the praises of your children’s behavior. The grandparents then leave your house and, within five minutes (usually less), those darling angels morph back into the gremlins you always knew they were. What gives?

Well, if you’re thinking about blaming yourself, you can go ahead and stop that right now. This is not your fault. Were your parents lying about the kids’ behavior? No, it’s not that either. Your children really were perfect angels for them. Here’s why: 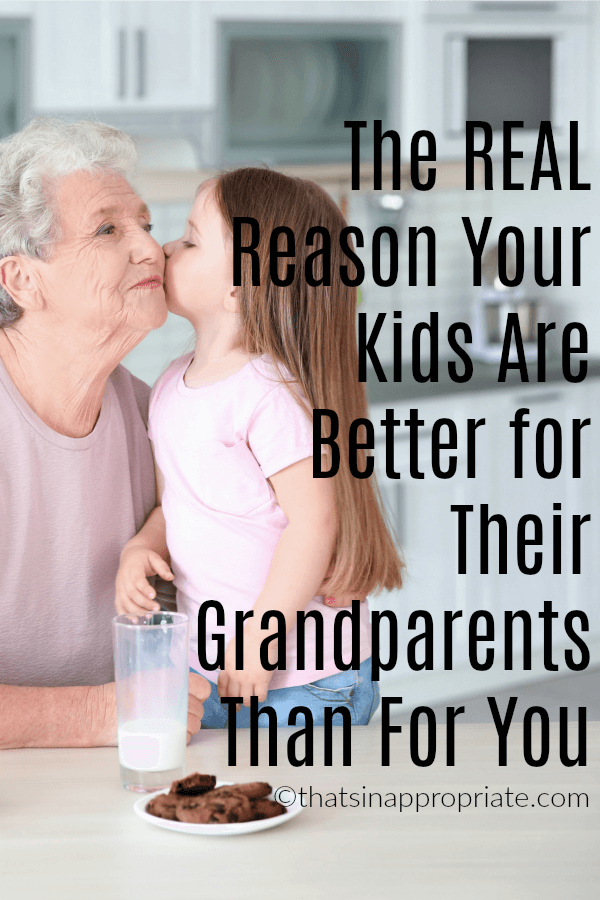 In the words of Wesley from The Princess Bride, “As you wish.”

Your kids didn’t hear the word “no” the entire time they were gone. All your children want to watch a different movie? No problem. There are multiple televisions at the grandparents’ house and they have no qualms about playing a different cartoon on each of them. Kids can’t agree where to go to eat? Problem solved! Lunch at Chick-fil-A and Dinner at McDonald’s. And if you have three kids? “Second Dinner” wherever the third would like.

At well-child visits, my doctors ask about how much WE ARE LIMITING SCREEN TIME (just in case we weren’t already feeling guilty enough about it on our own). Meanwhile, at Casa Grandparents, the kids can have all the TV, all the Netflix, all the iPads. All. Of. It. My dad’s “work iPad” had the Thomas the Train and Disney Jr. apps downloaded onto it about 2.5 seconds after it was issued to him. My youngest will probably be able to type in the passcodes to all four grandparents’ iEverythings before he can even say his own name.

Meal time is only kind of a thing at the grandparents’ house. Sure, if the kids feel like eating dinner, they’ll have it. But if not? Grandparents will just FEED THEM ALL THE SNACKS their little hearts desire. And none of that healthy stuff either. We’re talking high fructose-GMO-laden-prepackaged-preservative-laced crapola. Even our baby, who only knows five words, starts making a special tongue-clicking sound at the grandparents’ house, which is code for “feed me junk food.”

You pay attention to your kids, of course, but you also have responsibilities. If you drop everything and cater to their every whim all day, every day, your house will soon spiral into a (more) filthy hellhole with uncooked meals and unpaid bills. Not so for the grandparents.

They will follow your kids around like personal butlers of amusement, fighting all the nerf battles, playing all the board games, and doing all the crafts. Your children will believe the world revolves around them because, while they’re with the grandparents, it does. And if your children have great-grandparents? Game over. Great grandparents can literally do whatever the eff they want because, now that they’re in their 80s or 90s, they’ve earned it. They may observe a sugar-free, salt-free, taste-free diet 99% of the time, but as soon as they know your kids are on the way, they will start cranking out all the good stuff.

They can feed your children ice cream and chocolate from dusk ‘til dawn and you will shut up and like it.

If these circumstances are getting you down, just remember that it really is a blessing to have this many people who love your kids.

Besides, if you survive the next thirty-ish years, you may just have grandchildren of your own to spoil rotten and then return. Payback’s a beeyatch.

This post originally appeared on The Wild Wild West.