Have you ever tried to do anything, but you had a kid who wouldn’t stop talking at you? If you said yes, then you must be a parent.

In my house, my three kids are a whirlwind of commentary and shouting, which can definitely cause me some headaches.

But it also means there is not one uninteresting moment because if you stop and listen to a kid who talks too much, you’ll absolutely be in stitches at the hilarious observations they make.

On August 7th, Twitter user Kati Hartwig documented her recent experience on Southwest Airlines when she was seated by a young girl named Shawni.

In a string of tweets, Kati delighted Twitter with Shawni’s witty observations, even trying to get Southwest to chime in. 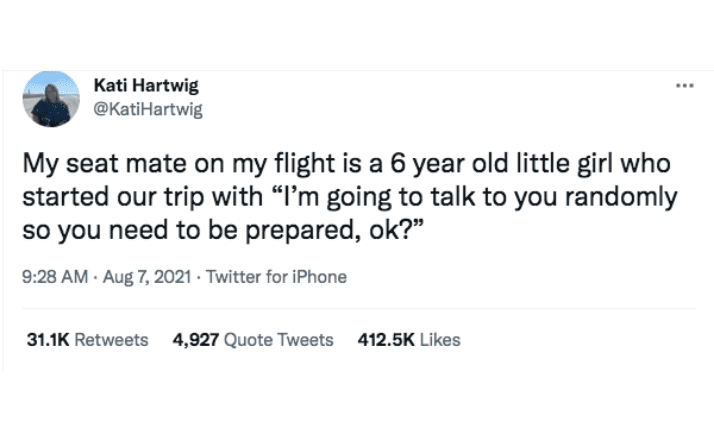 The Twitter story started with this, “My seatmate on my flight is a 6-year-old little girl who started our trip with ‘I’m going to talk to you randomly so you need to be prepared, ok?’”

Now, you’ll be forgiven if you read that and immediately thought, here we go, another story about a shitty passenger making some random flight hell for everyone.

And honestly, after stories about people being duct-taped to their seats for starting brawls or this lady who got fat-shamed by a nasty flight attendant, you’d be forgiven. But don’t worry, this kid isn’t like those monsters.

This kid is awesome. 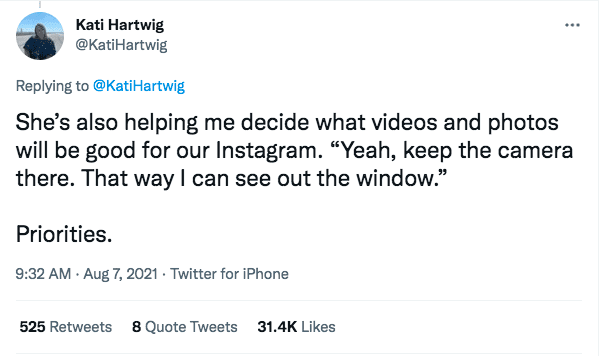 Like a diplomatic and thoughtful seatmate, this kid made sure that Kati was comfortable by helping her choose her Instagram videos and photos. Not missing any details, she hilariously instructed Kati where to place her phone so as not to interrupt the view from the window.

This is why Shawni made an interesting point.

The Southwest media team needs to hire this kid.

Not only is she pulling out cool historical facts, but she knows how thoughtful the pilot was to tilt the plane so she could see out of the window.

OMG, this kid is too much. LOL!

Her reaction “rolls her eyes in 6-year-old” had me howling with laughter.

Who hasn’t been hella annoyed by the person in front of you on a flight who reclines their seat? I mean, I get it, it makes it more comfortable, but it’s just too cramped for that unless you’re in first class. I’m just saying. Also, so is Shawni. 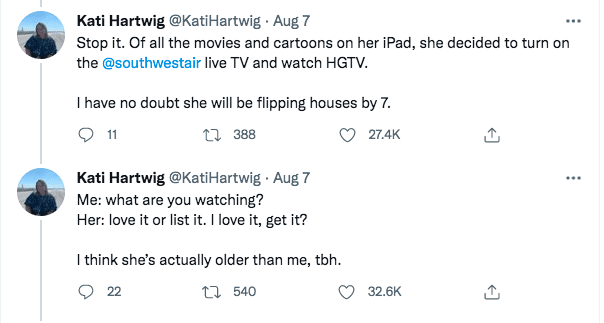 So, by this point in the story, if you’re wondering what kind of hilariously, deadpan, whip-smart kid we’re talking about, just know that she has an amazing future in real estate.

The lady in front of Shawni and Kati may not have been as amused by segments of the conversation, like when Shawni pointed out that they were “going down.” Oops!

If there was any doubt that Kati made a sweet new friend, her final tweet of the story left us smiling with delight.

“‘I feel like I’m lucky because I got to sit by you.’ Excuse me while I go cry in a corner.”

But the story doesn’t exactly end there because Shawni’s mom found this delightfully sweet Twitter story and she chimed in.

Southwest Air even reunited these two and made signs out of Shawni’s quotes to greet them at the airport.

Yesterday, Shawni and Kati were able to reunite at CMH where Shawni and her family were made aware of how much of a viral sensation she became! Thank you to @SouthwestAir for welcoming the family home with posters of her quotes & some goodies ???? pic.twitter.com/kjagbY1Xni

We love this story so much. If you’re having a down day or the news cycles are starting to make you feel depressed, bookmark this story and remember there are lots of marvelous little experiences happening all around us.

We need only to look and listen.

You can see the whole twitter thread for yourself here.

My seat mate on my flight is a 6 year old little girl who started our trip with “I’m going to talk to you randomly so you need to be prepared, ok?”

Mom Shares Story Of Her Son&#8…

There are good people in the world, and then there are GOOD PEOPLE. Ones who can only be described as … Read More