Whenever I pass an animal who met its untimely demise between the pavement and a Pontiac, I wonder what actually becomes of roadkill. Does someone haul it away? Do the vultures come for it? Does it stay there and slowly return to the dirt?

I have never wondered if they were going to be excitedly tossed in the back of someone’s car on their way to Hobby Lobby.

Yet, some photos of a horrifying DIY Taxidermy cat have resurfaced that prove anything is possible.

The story first appeared online in the DailyMail. The article told the tale of an art teacher named Jennifer Clark sharing the mother of all Pinterest fails on her social media after trying her hand at taxidermy on a cat she found dead on the side of a road.

Ma’am, this is not a Build-A-Bear.

While the original post cannot be located, it appears that Clark posted in the Facebook group, Bad Taxidermy, about her American Horror Story doll, saying she wanted to share the photos to make others feel better after seeing her botched project. 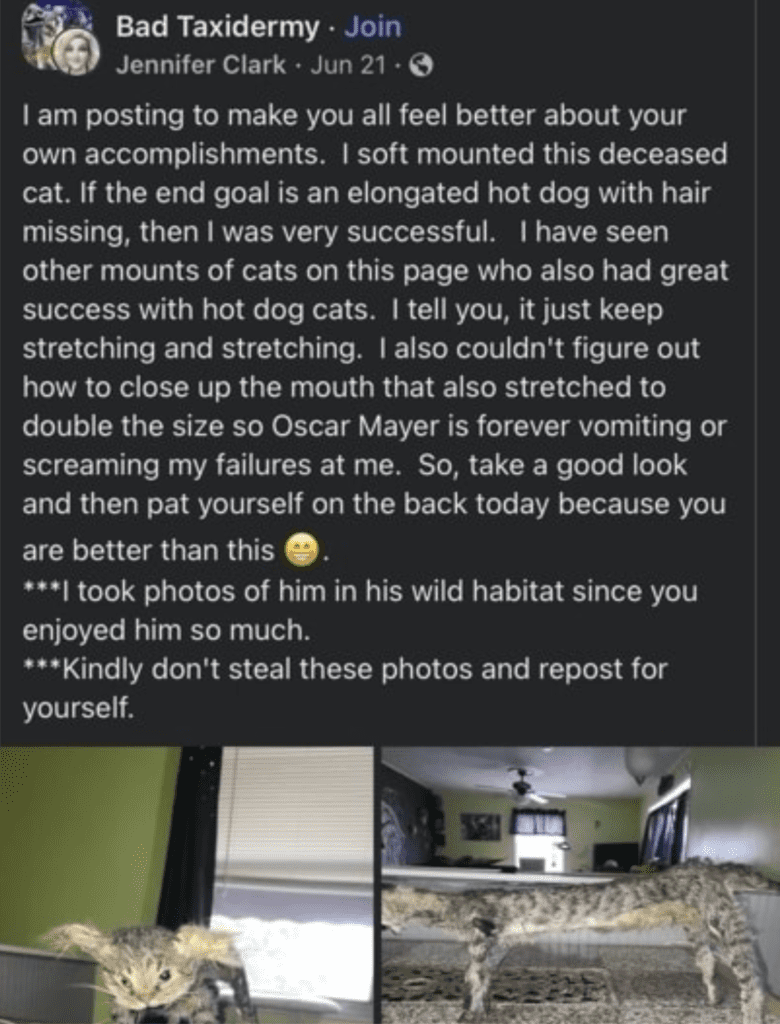 Apparently, cats are a particularly difficult animal to stuff and she knows of others who had similar results.

That result? An elongated and furry hotdog that she affectionately named Oscar Meyer. Just in time for me to gracefully decline invites to any end-of-summer cookouts. If you need me, I’ll be curled up on my therapist’s couch.

My question is why. Why. Why would anyone do that?

Clark mentioned in talking with Daily mail that the cat’s carcass kept stretching. And stretching.

The moment a dead animal starts to mimic a cheese pull, I’m out. Bury the poor tabby, say a few words (all of them being “I made a mistake”) and try to shower off the stench of death. Abandon ship, people.

Cats have nine lives. They deserve to rest in peace after all that living.

In the article in the Daily mail, you can see way more photos than you asked for (I mean, we didn’t even ask for one if I’m being honest).

I can only imagine the kind of haunting in store for anyone who dares mess with the natural order of a cat sulking off to their litter box in the sky.

How can this story not end in a curse that lasts generations?

I doubt you can even break such a curse. Have you ever met a cat? They don’t forget. Piss them off once and prepare to be snubbed, hissed at, and the owner of a lot of peed-on furniture.

This lady is going to walk out of her kitchen for a second, walk back in, and find all the cabinets and drawers open and this abomination on the counter.

When a thunderstorm knocks out her power, it will appear in the darkness, illuminated momentarily by a flash of lightning.

As she gets into her car on a Tuesday morning, she will buckle up and adjust her rearview mirror to find this crooked calico in her backseat. 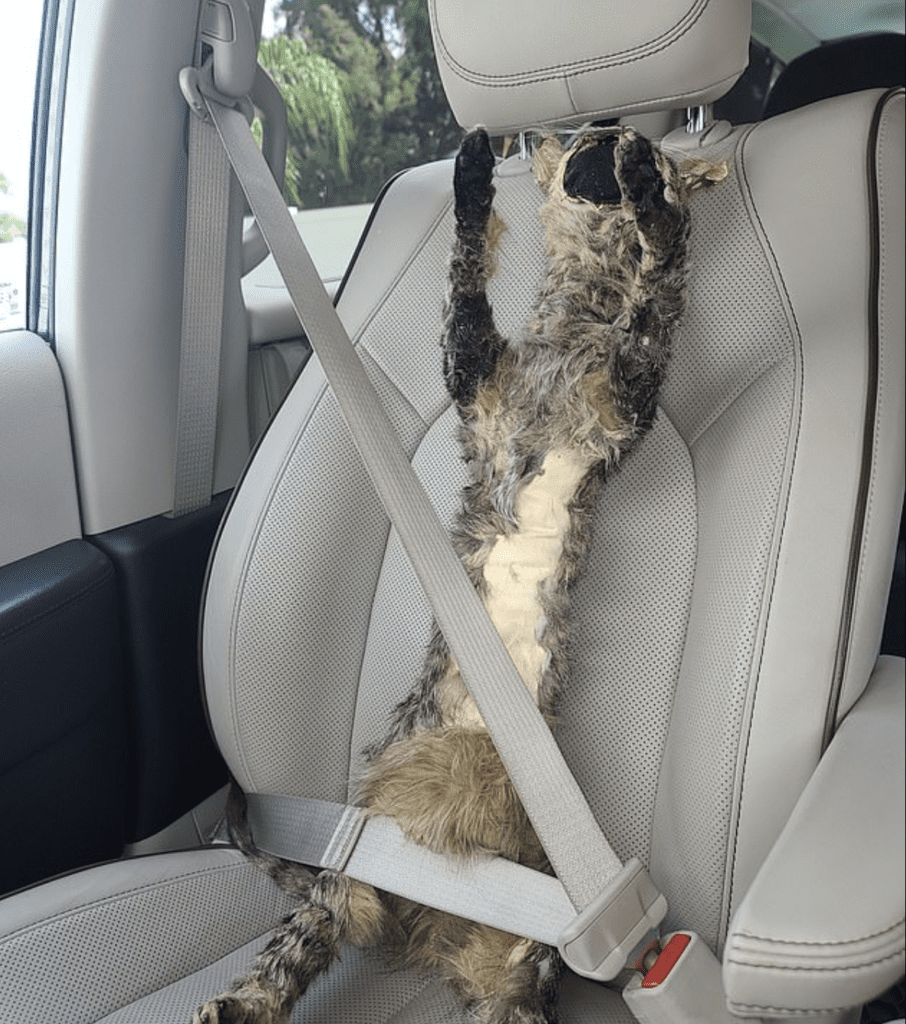 What did this cat do in its natural life to deserve to prowl the earth for eternity as an undead, hairy horror?

While we can’t exactly find Jennifer Clark to verify the story, you will for sure see these pictures on other social media posts. Whether you want to or not.

As if the story of an amateur taxidermist trying to Weekend at Bernie’s some roadkill wasn’t interesting enough for you, people are stealing Jennifer Clark’s pictures and passing this Nightmare On Sesame Street off as their own.

This story actually came to my attention because of a joke post by Alex Pomareda, pretending this was their attempt at preserving a family pet.

I have a feeling this is the cat that will literally never die. Its soul will haunt us FOREVER on the Internet.

While efforts have been made to find Jennifer’s original post, they seem to have vanished.

My guess is Jennifer either deleted or locked down her social accounts as an offering to the gods so they may have mercy and put an end to her haunting.

I will never look at a squashed possum on the side of the road the same. May they never meet the same fate as dear Oscar.

‘Sextortion’ Crimes On The Ris…

Giving birth is a life-altering experience. Not only are you bringing an entirely new life into the world, but your … Read More

When Korben told his mom, Nina Green, at twelve he wanted to wear a gown to his prom, he couldn’t … Read More