Janie showed up with the fever.

“Viral.” The on-call doctor said after looking her over. “Just wait it out. Come back if the fever isn’t controlled in a few days.”

A few days later, the fever was still fighting strong. We went back and the on-call doctor, again, told us it was a nasty virus.

And Alice started talking about the girl out in the yard.

“There’s a girl outside. She wants me to play with her.”

I look outside and see only a foggy morning. “What does she look like?”

“She looks like me. But she’s wearing a nightgown.”

More than once I wondered if the swing tied to the giant silver maple in the front yard wasn’t swinging on its own.

A week later, the fever still wouldn’t go away.

“There has to be something we can do!” I implore the on-call doctor. Never in the process did we see our actual pediatrician. He would have figured this out sooner, I’m sure. Alice was spinning in circles and laughing in the office, acting totally normal, but the fever still wouldn’t go down.

“Is she coughing?” The doctor asks.

The doctor stares at me blankly.

It’s pneumonia. I can see it on the X-ray and I have no medical training.

They prescribe antibiotics and the fever is gone in a couple days. But Janie didn’t go away.

“The girl,” as we knew her at the time, kept showing up outside during the night.

I’d ask Alice what she was doing up at night and she wouldn’t have a good answer for me. She’d tell me she’d gone to her window in the middle of the night and had seen the girl out there asking her to come play.

You never want to show your fear too strongly with a kid like Alice because it might inspire her to try something dangerous, like jump off the highest point of the play structure, causing her to injure her heels, and leading to yet another pediatrician visit.

“Why not?” I’m trying to avoid eye contact in case she sees my trick and learns how to open doors like a velociraptor tonight.

I picture myself on the news, begging police to help find my baby, promising I’m a good mother and that I baby-proofed and that this isn’t my fault. I picture the tweets, calling me negligent. I picture her frozen little body, out in the woods. I picture myself going to jail. Get a grip. “Why don’t you go play with her?”

“Because there’s the mean scarecrow.” She says, matter-of-factly.

“The bad guy scarecrow is outside my window at night.”

“What does he look like?” My heart is racing.

She thinks. Smiles, a wicked glint in her eyes. “Mike Wasoski!” My daughter is a perfect mimic, and I instantly recognize her deft imitation of Boo from Monsters Inc.

I decide not to worry too much about the girl and the scarecrow.

We also discovered during this time that Alice is far-sighted.

“Who is this?” I ask, pointing to one little blonde girl in a drawing.

I look closer and see that she did, indeed, draw glasses frames around the eyes. 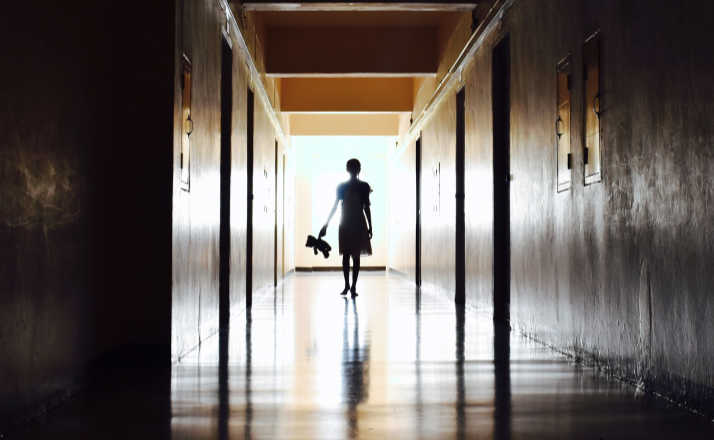 It was the first time I heard her name. I searched my lexicon of “kids we know” and didn’t come up with anyone named Janie, Jane, Jamie, or anything close.

“Your sister?” I wonder. Alice has a brother, Wesley, two years younger.

“Um. A little bit. She’s a half-year older than me. See how she’s taller?” Alice points to Janie on the page and, sure enough, Janie is a bit taller than Alice.

I am sure I know what this is about. “Alice,” I start with my gentle, Full-House parent voice, “are you feeling sad that you don’t have a sister? Or maybe jealous because some of your friends have sisters?”

“Are you sad because I told you I’m not having any more babies?”

“You love your brother?”

“So why don’t you draw you and your brother?”

“Because I drew me and Janie.”

“Do you think you could draw me a picture of you with Daddy and Wesley and I?”

I decide to drop it. No big deal. Imaginary big sister. Alice is the oldest; it makes sense that she’d fantasize about having a big sister around to be her friend.

I am a bit upset, though, because Alice has been producing these beautiful family portraits lately…and Janie is in all of them.

Usually her dad is on the left, tallest, with a mess of curls. Then me, looking like a tall Alice except with brown hair. Then Alice. Then Janie. And at the bottom, barely fitting on the page, and rushed due to, I don’t know, hand fatigue, mental fatigue, or lack of care, is a smudgy lump-like thing representing Alice’s actual sibling, her brother, Wesley.

Sometimes the cat is in the mix, too, and some flowers or grass. Or a rainbow. Or one of those famous shovels. The pictures vary, but Janie is in all of them.

I commission a picture of the four of us, sans Janie, and she agrees begrudgingly.

It seems Janie’s feelings are hurt. I frame it and put it in my husband’s office. It’s the only “real” family picture we have from Alice’s extensive art portfolio.

One night, at bedtime, Alice tells me Janie is in the room with us. I don’t know how she managed to snag an invite inside after always being relegated to the yard, but she’s in, and, according to Alice, she’s “standing right there.”

Right there, near the bed. Watching me.

I try not to give too much weight to this. “Oh, she’s here? What is she wearing?”

Janie shows up in drawings Alice does at preschool. One day, a teacher tentatively asks me, “Alice…doesn’t have a sister, does she?”

“Is she talking about Janie to you?”

“Yes. She says she has a big sister named Janie.”

“Oh, ok. She draws her in all her family pictures and was talking about playing with her big sister. But I didn’t think you had any other children.”

The teacher laughs. So I laugh. It’s a joke. It’s not real. Janie’s a cute, imaginary friend.

It’s developmentally appropriate. My sister had an imaginary friend. He was a ghost. It’s like that. My sister turned out okay, didn’t she?

Alice has always been imaginative. She plays doggies, kitties, doctor, princess, fairies, you name it. But her favorite thing to do is go out in the front yard, by the big tree, and play on her swing.

Usually I stay inside, watching from the kitchen or my de facto desk at the dining room table. I like to watch her playing independently, being her amazing, dramatic, creative self. I notice her mouth is often moving, as if she’s talking to someone.

It has been two years and Janie still lives with us.

She’s casually at the table at breakfast. She’s listening in at storytime. I try not to make a big deal of it. No need to squelch Alice’s creativity…or anger any spirits. Sometimes, though, my curiosity gets the better of me.

One night as we wrap up dinner, I ask, “Alice. Who are Janie’s parents?”

“But I didn’t give birth to her. I’d remember that.”

She thinks for only a moment. “Her parents died. So she lives here now.”

I feel a coldness in the air, in Alice’s tone.

“Why did she choose to live here?” I try.

“She heard about me. And came here to be my…” she searches for the right word, “stepsister.”

“She’s not…alive?” I ask. Wesley shrugs and runs into the living room.

Alice goes to play with her sibling.

Perms Are Back In Style and The Peo…

When it comes to trends, there’s no denying that what’s old is often new again. While you may not be … Read More