Flu season is nearly upon us; if you’ve ever had the misfortune of coming down with the flu, then you know that it feels like you’ve been hit by a freight train.

The symptoms often seem to pop up out of nowhere. One minute you’re going about your day, and the next…the chills hit you. The massive body aches and pains quickly follow- some people also experience a cough, a runny nose, or a headache as well.

The bottom line is: influenza is not to be taken lightly.

In addition to the awful discomfort, a serious case of the flu can actually be fatal. That’s why medical professionals typically urge people to get their flu shots, which can be very effective in both preventing the flu & minimizing the extent of the symptoms.

A nurse’s impassioned post on Facebook urges people to get their flu shots- not just for the sake of their own health, but to protect the health of those around them.

Nurse Amanda Catherine Bitz wrote a post on her Facebook page addressing just why it’s so important for everyone to get their yearly flu shots. 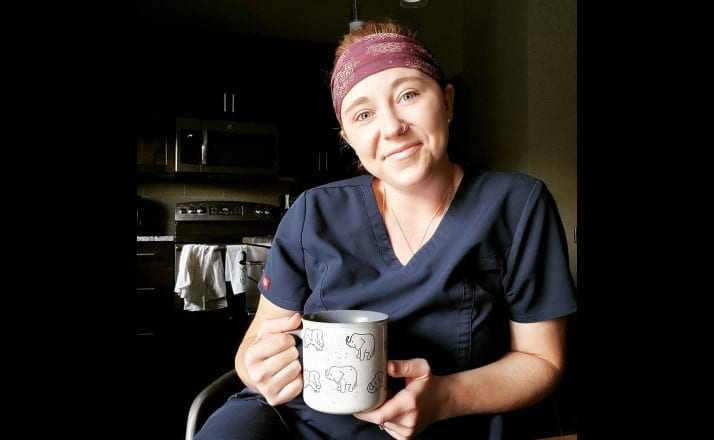 The flu vaccine has also been shown to reduce the severity of symptoms for those who do catch it, and who wouldn’t want to shorten its duration, right?

Sure, getting the vaccine is personally beneficial, but the point of Amanda’s post is that IT’S NOT JUST ABOUT YOU:

You get the flu shot not always for you, but for those around you.

The reality is, there are those that are dangerously vulnerable to the flu, and getting vaccinated protects them… from catching the flu from you.

Amanda shared in her post a comprehensive list of those that are at extreme risk from the flu. There are groups of people whose immune systems cannot effectively fight off the influenza virus, & contracting it puts their lives at far more risk than the rest of us.

It’s for the vulnerable people among us that Nurse Bitz urges us to get vaccinated for.

For the grandparents, whose bodies are not what they used to be, and they just can’t kick an illness in the butt like when they were young.

Our immune systems ability to ward off infections declines as we age- the elderly are at risk as a result.

For the 25 year old mother of 3 who has cancer. She has absolutely zero immune system because of chemotherapy.

Or anyone with cancer, for that matter. Their bodies are susceptible enough to various infections and illness due to chemotherapy treatment.

For the newborn baby who was just welcomed into the world, and isn’t quite strong enough to fight off infections on his own.

That’s a given! Babies’ developing immune systems are initially fragile, & a bout of the flu could prove lethal.

Obviously, there are numerous groups of immuno-compromised individuals that we could protect from the flu with our own vaccinations.

But getting the vaccine protects everyone around us- not just from death, but from the inconvenience of battling an unnecessary case of the flu.

The most obvious being those that are familiar with the flu on a deep level- the medical professionals:

For the nurses and doctors that take care of you. If they get sick, they can’t go to work and take care of the countless patients that need them.

Or the parent that literally can’t afford to take a week or more off of work:

For the single dad who can’t take any more sick days and needs to provide for his kids.

It could a selfless act of prevention even for:

For the 7 year old boy that just wants to play with his friends. But he has a disease that puts him at a higher risk for infection, so he has to stay inside.

As someone who grew up with asthma, I feel this one. Fighting off the flu is tough enough, but when you’re a kid, being sick for a prolonged period of time is the pits. Not to mention the possibility of a hospital stay if you’ve got breathing (or other) medical issues.

Nurse Bitz isn’t trying to be a hardass for the sake of taking sides in the controversial vaccination battle. Her work has put her on the front lines of fighting influenza.

As she poignantly puts it,

I have been in the room as a patient has passed away, because of influenza.

Exactly. Sometimes we forget that the flu isn’t just a hassle. It isn’t just an inconvenience. It can be a killer. People die from it.

According to the CDC as reported in The Washington Post, influenza killed over 80,000 people during the 2017-2018 flu season.

That may seem like just a statistic, just a number. Until it’s someone in your family.

Nurse Bitz wants people to remember that we can minimize the destruction that influenza can wreak in our communities. And it’s a pretty simple fix, too:

Herd immunity is a thing.

Influenza killing people is a thing.

You getting the flu shot, should be a thing.

Last night I shared a post on Facebook that said 'Hey A**hole, the flu shot isn't about you." Sitting here soaking up…


Just Because I Joke About Coronavir…

Laughter is commonly known to reduce stress, ease anxiety and tension, and even help reduce pain by prompting the body … Read More