Filter Free Parents
Home Mom Life To the Stranger Who Made Me Feel Like A Terrible Mother –...

I had the unpleasant experience of having an unsolicited altercation with a stranger in regard to my parenting. It made me feel awful. But, what I would actually like to tell that stranger that made me feel like a terrible mother, is thank you.

Unsolicited and unappreciated advice from strangers in regard to parenting happens all the time. It can make you feel like a terrible mother.

Every mom who has had a newborn can probably recall a time when the baby has been particularly colicky and was refusing to eat.

After having this experience enough times, every mom will tell you that it is the result of only a few different possibilities. The baby is tired, hungry, or perhaps not feeling well.

I happened to be having this very experience at the gym, as I was entering a Mama and Baby Class. As I was simultaneously trying to soothe the baby and deciding if I wanted to enter the class in hopes he would just fall asleep as has happened before, or pick up my toddler from Child-Watch and call it a day, a woman approached me asking what was wrong with my baby.

Response attempt one, ignore her. Fail, she repeats herself. Response attempt two, don’t engage. “Nothing”, I told her, and turned away. She wasn’t leaving. “She doesn’t want the paci”, she started.” Anyone with two working eyes, and who takes the time to look, can see my baby is a boy. “She doesn’t want the paci, she wants to eat and you need to feed her.” Boiling point reached. 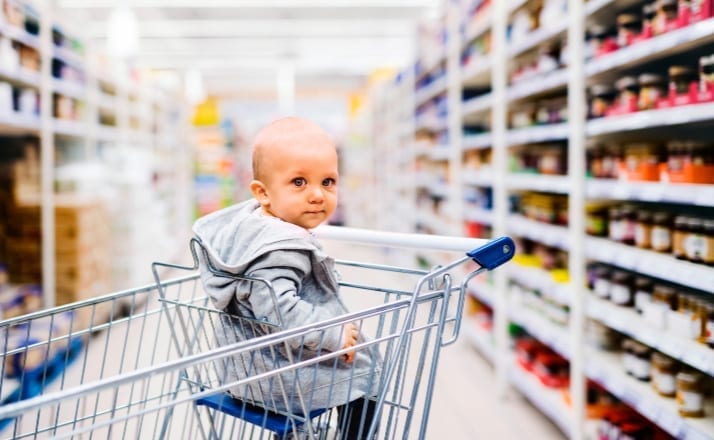 Thank you for reminding me that many strangers are helpful, and most people are good.

I experience this every day. The single adult who offers to take my cart back in, the one with the steering wheel, that I know they aren’t going to use.

The mom at the park who helps my child because she happens to be a few steps closer and sees my hands are full with the baby.

The student at the library who offers to help when he sees me struggling to wrangle the kids in to the car after Storytime, terrified I might take him up on his offer. This is the norm, and the lady at the gym is the exception.

Thank you for showing me what a confident mom I have become.

My first-time mom-self might have cowered and cried. I did that ten minutes later on the phone to my husband. But to her face, I replied, “NOTHING is wrong with him. He is fine. He is NOT my first child, this situation is under control, and I do not need to be talking to you.”

Offended, she responded that clearly, I did not know what I was doing as a parent and that I needed major help. The situation was not under control, but I was proud that I stood up for myself and my baby to someone whom I found offensive and not at all willing to help.

Thank you for showing me that not all parenting situations are under control.

And they are never going to be. It’s the gig.

It is okay to let someone know about it. At least, that is what I told myself as I discussed the situation with a gym employee the following day.

Thank you for reminding me that perspective is key.

It was inevitable we were to be in the same place, at the same time, again soon. I had gone over a thousand different scenarios in my mind of what I would say had she want to interact again.

Days went by, and we did not directly cross paths. I had nearly forgot about the whole thing when both my kids and I were turning a corner on our way out, and we ran directly into her. I froze.

All four of us stopped and she looked carefully at each one of us. “Oh, my! Is it two little boys you have? What a lovely family.”


Vodka Ice Pops Are At Costco And Su…

Bonnie has a message for all those covidiots who aren’t taking the coronavirus seriously and she’s not messing around. The … Read More