Worst week ever. The nine-year-old declared it to be so.

Did I feel bad? Not really.

She could learn how to survive without her iPad and headphones for a bit.

A throwback to her earlier years when she didn’t know how to use Netflix or the existence of many tutorials for slime making on YouTube.

We thought we had a good system in place for her iPad. Rules and restriction about content and time spent. We realized over the summer that somewhere along the way we got a little lax with the screen time.

What was once no more than thirty minutes before bed turned into an hour because it was summer and her bedtime was later.

What was no screen time in the AM turned into accessing it immediately when she knew it unlocked at 7:30 am on a Saturday when the rest of the family was still asleep.

There was no inappropriate content. She wasn’t hiding in her room. That has never been our problem. We just realized we had let five extra minutes here or there turn into an hour here or there without even noticing.

Like a moth to a flame, if she had a spare moment of quiet she immediately reached for her headphones and screen. Not a book, not a game, not imaginative play with her sister. That’s when we decided to take action. 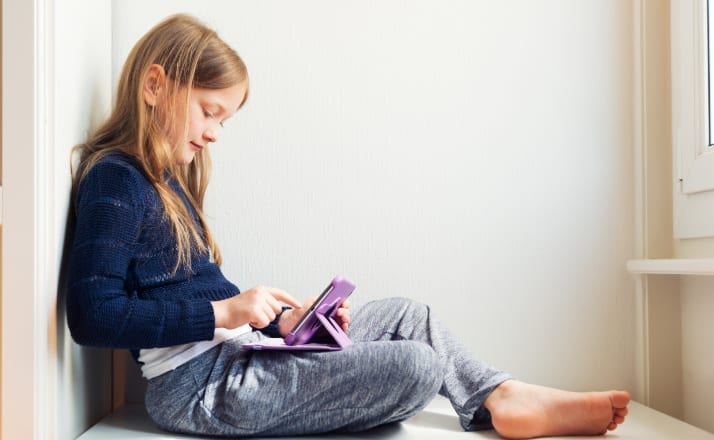 We became the worst parents ever. We took away her iPad for two whole weeks.

Why did we come to the decision to make a change?

Addiction is a strong word but we felt like she had created a certain level of dependency on her device. She could watch what she wanted when she wanted and it was fun.

As parents, we started to feel like we were becoming a little bit dependent on it too. Summer days are busy and nights are rushed too so unwinding at night with everyone on the couch is sort of nice. We stopped watching the clocks and that resulted in more time that she got a little too used to having.

What made us decide to go cold turkey?

We already have rules in place, and she wasn’t necessarily breaking them. She was just taking advantage of us not being as diligent in monitoring. She was also getting defiant when she felt “cheated” out of screen time during the day because of camps or other activities keeping us busy.

Not one thing in particular but a combination of observations and behavior changes convinced us the iPad had to go.

There were the obvious signs like sneaking it when we weren’t looking and immediately running to it when she was in the house. But others were less noticeable.

The girls have never been into gaming like I hear complaints from some other parents. They have never played Fortnite and Mine Craft was of no interest. They do, however, fill their screen with the most random of random things.

I noticed when looking over her shoulder that she has six different fashion design games. There are also a beauty shop, nail salon, and bakery versions of similar apps. Definitely arent educational, and we definitely did not put them there so not sure how she is downloading all these freebies.

I learned there were times I thought she was playing one of her puzzle games or brain teasers. And she was. Only, when I looked at her screen she would be playing a game in the small window that overlayed on top of a movie or TV show in the background. I didn’t even know iPads could do that!

We have an apple TV where we can see all of the family accounts. I opened her account to put on a movie for the girls when some friends were over and I was shocked. Her Netflix queue was a million miles long!

Every show or movie her friend asked to watch, she had already seen. It was all similar stuff like baking shows, dance shows, cheerleading movies but I had no idea there were so many. How was she even finding these?

Literally. Our family is not generally known as early risers so for her to intentionally wake early for extra time was very sneaky. One of us would wake early on a weekend and she would already on the couch watching her iPad.

The reverse was also true in that no matter how tired she appeared at night, if a screen was on she was awake. An hour here or there may not matter to an adult but to a child on the go, it adds up quickly.

At nine, the eye roll has been perfected. We got to the point where we would make the request to turn off the device and the immediate response was the whole eye-roll-huffing thing they do so well. It wasn’t like she was being asked to take out the trash. Just put the screen away and find something else to do.

Was she happy to be without her beloved device? No.

Did she get over it? Yes.

The first day or two brought out the extreme whining and claims of unfairness. By day three she just got over it and went back to many of the things she had abandoned.

I don’t even think she realized how much time she was spending watching shows and movies in front of her screen with headphones on.

She took the time to find toys and activities she hadn’t done in a while. She spent a lot more time outside.

It also opened the doors for a larger family discussion about screen time for everyone. I will admit, I am addicted to reading books with the Kindle App. If we are just hanging out, I would rather read than watch TV. My husband might be checking sports scores at the same time.

We were all guilty of too much screen time.

To get her precious iPad back, we asked her to come up with a revised use plan. She decided she could live with managing her own use for thirty minutes per day on the weekdays and one hour on the weekend. Instead of a certain start and end time, we changed the settings so access is set to a total number of minutes.

She decides when she will be on it but once she hits her time limit, it’s done. There is no asking for extra.

The first few days were again a bit tough. She right away started multi-tasking and quickly learned that uses the time twice as fast. Oops!

Its been several weeks and I have been impressed with the improved self-control. Giving her more of a say in the rules has opened her eyes a bit to the issues we felt the screen time had caused. She has found a better balance with activities to stay busy when she feels bored.

I think it was a positive move to take it away and reset. Turns out maybe we aren’t the worlds worst parents.

Just Because I Joke About Coro…