It’s doled out like the canned advice it is. Tossed around to new moms like it’s even a thing. Or worse yet, like it’s a thing that’s supposed to be achieved.

I sat on the bed in my mesh underwear, freshly stitched and thrown into a world no one could ever prepare you to navigate while those words replayed in my mind.

Before I was discharged from the hospital, the nurse gave me packets of paperwork. Social Security forms, discharge instructions, legal documentation, pamphlets. So many pamphlets. And tucked somewhere inside of that mass of forms was a two-sheet survey.

It was about postpartum mood disorders.

Even just writing the words in their entirety feels like taboo. Like I’m somehow unleashing a Pandora’s box full of motherhood’s greatest kept secrets; a penance I’m sure to pay by discovering holes in the crotch of my favorite black leggings, and running completely out of sugar-free pumpkin spice creamer after I’ve just made a fresh pot of coffee.

That was it. Just a front-and-back survey that had been photocopied from a copy so many times the words were getting difficult to read. That’s the entire scope of the postpartum mood disorders coverage that I got as a first-time mom.

Statements like, “I cry more than the average person.”

“Hmm,” I thought after a traumatic 23-hour labor, then spending the next 24 straight hours trying to get my newborn to latch properly. 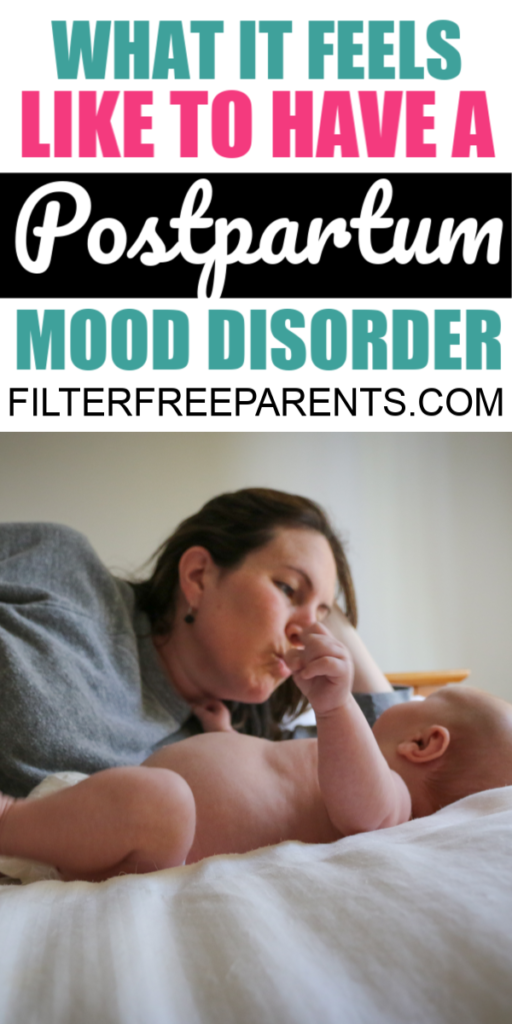 But if I check ‘yes’ someone might pop around that curtain shouting, “Aha! We knew you weren’t fit to be a mother! Someone take that baby!”

Better check ‘no’ just in case.

So, I turned in my paperwork with all the “right answers” and they sent me on my way. No actual conversation with anyone, aside from a brief mention of the baby blues and a few negatively-phrased questions as they scooted me out the door.

“You don’t feel like you’re having a hard time managing your emotions, do you?”

“Okay, good. We’ll see you in six weeks. Call if you have any issues or if you pass a clot larger than your fist.”

Weeks came and went, and I didn’t feel quite as happy or at ease as I thought I would, but they did mention those baby blues, and I didn’t want to sound the alarm over nothing. 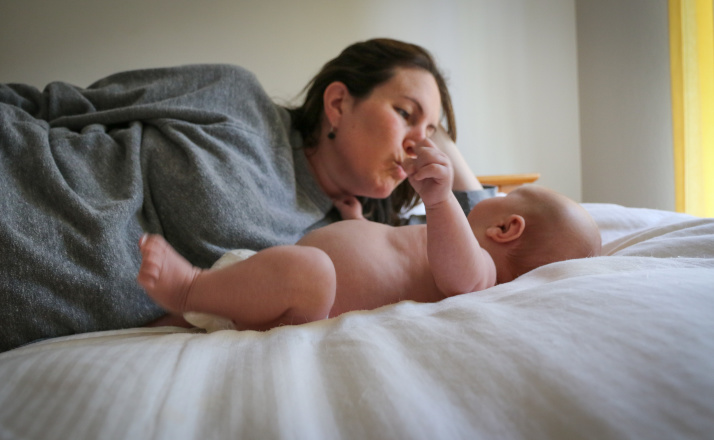 But it didn’t get better like they said it would. In fact, it was getting worse. Sometimes it felt like someone simultaneously sucked all the air out of the room and sucker punched me in the gut.

But I didn’t dare acknowledge it out loud because that would’ve made it real. And I should’ve been so happy. Remember, I was supposed to enjoy every moment.

At least that’s what everyone said.

I didn’t want to be a burden.

I wouldn’t have even known how to respond if someone asked what they could do to help. So, I kept it to myself because that felt safer, and it was definitely easier than trying to explain it.

What does it look like? Well, postpartum anxiety shows up in all kinds of ways.

It’s the lactation consultant who tells you to “calm down” because your stress is only causing more problems for the baby.

It’s the night-shift nurse who assures you you’ll ruin any chance of nursing when you call out of sheer desperation to request a pacifier.

It’s the well-meaning acquaintance who asks you if the baby is sleeping through the night, or rolling over, or sitting up – any milestone really it doesn’t matter, just so long as they pick the one you’ve already been a little bit concerned she hasn’t met yet.

It’s alarms set throughout the night just to make sure she’s still breathing.

It’s flu season. The holiday season. Any season that could be too hot, too cold, or too germy.

It’s other people. God bless you, but YOU’RE HOLDING HER THE WRONG WAY.

It’s change. Unpredictability. Unfamiliar places and territory. Get-togethers that run long and interfere with the schedule.

It’s questioning every single decision you make, and oftentimes, feeling so paralyzed by those decisions that you can’t make one at all.

It’s isolation. Out of fear. Out of shame. Out of guilt.

We live in a culture where moms are afraid to ask for the help they need.

No one told me about the darkness.

When I asked about it later, the responses from fellow moms were all the same.

“Would you have really wanted to know?”

“I didn’t want to rain on your parade.”

And listen, I get it.

But what a difference it would have made if someone had just told me it’s okay not to enjoy every moment.

That I wouldn’t. But that it would all be worth it, every single second. And if at any point it ever started to feel like too much, to raise my hand and ask for some help.

And, yes. In that moment, all starry-eyed and smelling of Dreft, and absolutely clueless, I probably would have thought, “Okay, lady. Thanks for that.”

But at 2:30 a.m. after days without sleep, sobbing in the dark while desperately trying to figure out how to nurse a newborn with a lip tie, that piece of seemingly misguided advice would have played on repeat in my mind.

“It’s okay not to enjoy this moment. It’ll all be worth it. Ask for help.”

And maybe I still wouldn’t have listened. But at least I would have felt more normal.

Maybe some of you have no idea what I’m even talking about. And if you’re in that camp, drop down on your knees right now and thank the good Lord.

But keep your eyes wide open because I can almost guarantee you know someone just like me.

Take a good look at the women in your life, and try not to get hung up on what you see on the surface.

If you see her struggling, step in with love and encouragement, because odds are, she’s not going to ask you for the help she so desperately needs.

Smile. Tell her she’s doing a fantastic job, and you think she’s a great mother. Drop off a meal, and offer to stay long enough to let her get a real shower, in peace.

Respect her wishes and her boundaries, even if they seem like an over-the-top, ultra-protective, why-would-you-ever-level of crazy. Because she knows. She can feel it. But she’s hanging on by a thread, and maintaining a sense of order is the only thing keeping her from spiraling completely out of control.

Some of you know exactly the hole I was in. Some of you are still down there as you read this.

If that’s you, let this serve as your light. You’ll make your way out. You don’t have to pretend anymore.

Talk to someone. Anyone. Your partner. Your mom. Your best friend. Someone who has your back.

And if that doesn’t cut it, call. your. doctor. There is nothing shameful about asking for help. In fact, I would argue doing so actually makes you a better mother.

I should have called. And it cost me months of struggle and unhappiness, and a total loss of myself to realize how much help I really needed.

It’s time to stop judging, stop filling them up with unrealistic expectations, and for the love of all things holy, stop telling them to enjoy every moment.

It’s OK To Just Survive. There is no award for Outstanding Quarantine Mom.

When our kids are little, we sometimes look forward to a time when they will be a bit more independent … Read More

It’s OK To Just Survive. There is no award for Outstanding...