Ask any therapist and they will tell you that the key to a successful relationship is communication. The exchanging of information back and forth. The give and take that happens when one person speaks and the other person listens and vice versa.

And it could be argued that the most important part of communication is LISTENING. And you would think, based on the fact that people are born with EARS that listening really is not that difficult of a skill to master (barring any sort of hearing loss, that is.)

But you would be WRONG.

Because as any couple soon realizes, the art of listening can be a tricky one.

Once in a while, words get lost in translation. Or lost completely. And that whole belief that when you speak, and words leave your lips, that they are actually being heard by your dearly beloved? Quickly dies a thousand deaths.

Because selective hearing is REAL. And now? We have definitive proof.

A recent survey conducted by Scrivens Opticians and Hearing Care found that three-quarters of people in the United Kingdom believe that their partners have selective hearing.

And surprise surprise! And by surprise I mean, absolutely no one finds this surprising, men are more likely than women to conveniently not hear what their partner has to say.

Things like, “Hey babe, can you unload the dishwasher?” or “The baby needs changing,” or “The toilet is making that weird sound again, can you take a look at it?” Probably.

Women, on the other hand, choose not to listen 339 times a year.

You could argue that women tend to use a lot more words in a day than men.

There is the myth floating around that women prattle off 20,000 words compared to a mere 7,000 by men. However, studies have proven that this is, in fact, not true. Some studies have even found that men use up more words in a day than women.

So sorry fellas. There goes that excuse. 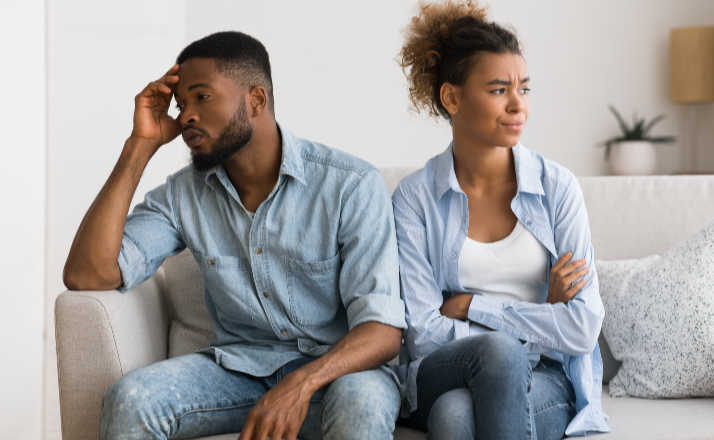 But it does beg the question, why are men more at risk for Selective Hearing Syndrome than women?

Why is it that men tend to hear things like “Wanna do it?” but can’t seem to hear “Wanna take out the garbage?”

Is it specific words they can’t hear? The tone being used? The volume at which the words are being said? Sometimes I wonder if I just imagined saying the words out loud. Maybe I didn’t enunciate them clearly enough. Or perhaps the hubs has been stung in the inner ear by a bee.

A study conducted at the University of Sheffield back in 2010, may have the answers.

Published in the Journal NeuroImage, researchers discovered that men really do have a harder time hearing women’s voices. Apparently guys can easily hear and understand other men’s voices but when it comes to women, a different region of their brain has to be activated.

When they hear a female voice, they have to decipher it like they do the sound of music which is a more complex process than that of deciphering a male voice.

So yeah, maaaybe they have a valid excuse for their sup-par listening skills after all. Maybe.

Based on Scrivens Opticians’ study, however, it’s not just men who suffer from selective hearing. Women do too. Albeit at a lower rate of incidence.

If I’m being honest, I’ve had to admit to my husband on more than one occasion, “Sorry hon, I wasn’t listening.”

And don’t get me started on the kids. Because clearly, selective listening begins at an extremely young age. And it doesn’t discriminate between gender. It’s the reason parents yell.

Ask your kids to clean up? No response. Ask them to go brush their teeth? Nothing. Tell them it’s time to get ready for bed? Nada.

Selective hearing is MOST DEFINITELY a thing.

All joking aside, the experts behind the poll did say that it could genuinely be the result of hearing difficulties. In fact, 4 out of 10 respondents said they “know with certainty” that their partner struggles to hear.

So the next time your partner appears to conveniently miss what you have just said, maybe cut him a bit of slack. Perhaps he isn’t deliberately tuning you out in favor of playing Clash Royale on his phone. Maybe he really didn’t hear you tell him the kids have a baseball tournament all weekend THREE TIMES. I mean, it’s possible.
Or it’s a clear case of Selective Hearing Syndrome. You be the judge.

Even Rob Lowe Wants To Be The …

Every once in a while a story comes along that’s so good it makes you want to sing “Hallelujah!” accompanied … Read More