Do you know what snow brine is? It’s an anti-icing solution that’s scattered on roads to prevent any snow or ice accumulation. Do you care what snow brine is? Most of us would say no- a 3-minute video about Tennessee’s Department of Transportation’s strategy to brine roadways might seem rather dull, right?

Until reporters interviewed D.O.T employee Greg Peak to gauge what the state is doing to prepare for this weekend’s snow.

(Spoiler Alert: It’s brining. Lots of brining. And brine. In fact, if you played a drinking game in which you take a shot every time you hear the word “brine”, you’d be pretty liquored up at the end of the video. Just saying.)

WATCH: TDOT is sharing their plans for this weekend's storm. MORE: https://bit.ly/2Huqbh8

But the reaction of the live video’s viewers is anything BUT dull. There are tons of them, and they are HILARIOUS.

Why, you ask? Well, it’s not the brining that caused the frenzy, but the… briner?

The audience thinks Mr. D.O.T. (Department of Transportation) is H.O.T. (You know, hot. And hopefully single?)

Greg Peak’s interview regarding the Department of Transportation’s plan to tackle the impending snowstorm resulted in an unexpected firestorm… of social media frenzy, in the form of Facebook commenters expressing their um, interest. But not in the brine.

The live video, which aired on Nashville’s WKRN-TV Facebook page on Friday earned 316K views and over 3K shares within its first few hours.

But the comments… oh, the comments. Over 2.8K comments in the course of a three minute video from an audience that was digging this dude!

The minute Greg appears on camera to answer the reporters’ questions, women needed to know the ‘deets- not about the snow, but about GREG:

The details of the plan for the impending snow are mentioned, but apparently most of the audience isn’t focused on much more than, again, GREG.

Some viewers wanted to know how many inches to expect. Of snow, of course. Totally.

Some just didn’t want to be disappointed by too…little. Again, snow, you dirty birds.

Others got right to the point: they were in need of a strong plowing (and no, we’re not talking about snow this time, apparently).

It was clear that the viewers were super-enthused about watching Greg. As for brine- blah, blah, blah- no one seemed to care about the brine when they could simply marvel over Greg. And tell their friends!

There were tons of admiring comments- but it got EVEN BETTER.

Many viewers commented about checking for a ring, and several requests were made to “zoom in” & check his marital status. Some pointed out that if Mr. D.O.T HOTTIE was married, his wife might not like all of the “attention” her husband was getting.

But Greg’s not the only awesome person in this amusing anecdote, people- his wife’s pretty dang awesome, too. Instead of being offended by the virtual horde that drooled over his live video, she commented, too: 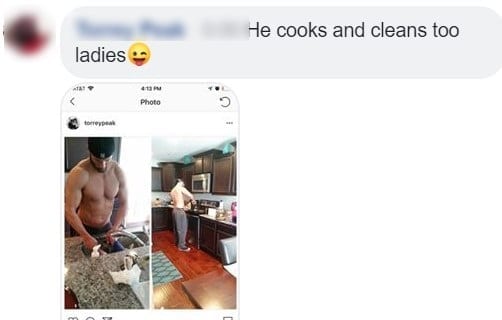 And she also showed her own appreciation for Greg’s newfound celebrity status by posting the full-sized version to her Facebook page:

Yup, the he’s married, a revelation that broke countless hearts on Facebook and was mourned to the sounds of Alanis Morissette, apparently:

So, exactly what concentration of salt is the brine mixture that will be used on Tennessee roads this weekend?

Thousands of admirers still don’t know & don’t care because they were too busy fawning over Greg Peak, who’s melting ice on the roads of Tennessee & hearts (and maybe other body parts, too?) on social media.