We love our pets. And for good reason. They love and adore us unconditionally, are always happy to see us, and they get bonus points for not rolling their eyes every time we ask them to do something.

There’s a reason we call them our “fur babies.” Because they are and we have no shame.

Some pet parents even go so far as to throw their pets elaborate birthday parties and wear matching outfits.

But none go as far as this woman.

One woman on a recent Delta flight took the idea of “fur baby” to a whole other level when she was caught breastfeeding – HER CAT.

The unidentified female was aboard a plane from Syracuse, NY, to Atlanta, GA, when she was alledgedly caught breastfeeding her furless feline on the flight.

Newsweek reports that one of the flight attendants, Ainsley Elizabeth, let the cat out of the bag in what appears to be a now-deleted TikTok saying:

“This woman had one of those, like, hairless cats swaddled up in a blanket so it looked like a baby.

Her shirt was up and she was trying to get the cat to latch and she wouldn’t put the cat back in the carrier. And the cat was screaming for its life.”

I bet it was screaming.

Naturally, a flight attendant attempted to get the woman to stop and put her cat back in its cage, however, the woman refused.

At this point, a Delta crew member sent a message via the Aircraft Communications Addressing and Reporting System (ACARS) to ground control in Atlanta informing them that a passenger in seat 13A was “breastfeeding a cat.”

(I can just imagine their response, “this is a cat-astrophe!”)

A photo of the message board was shared on Reddit. 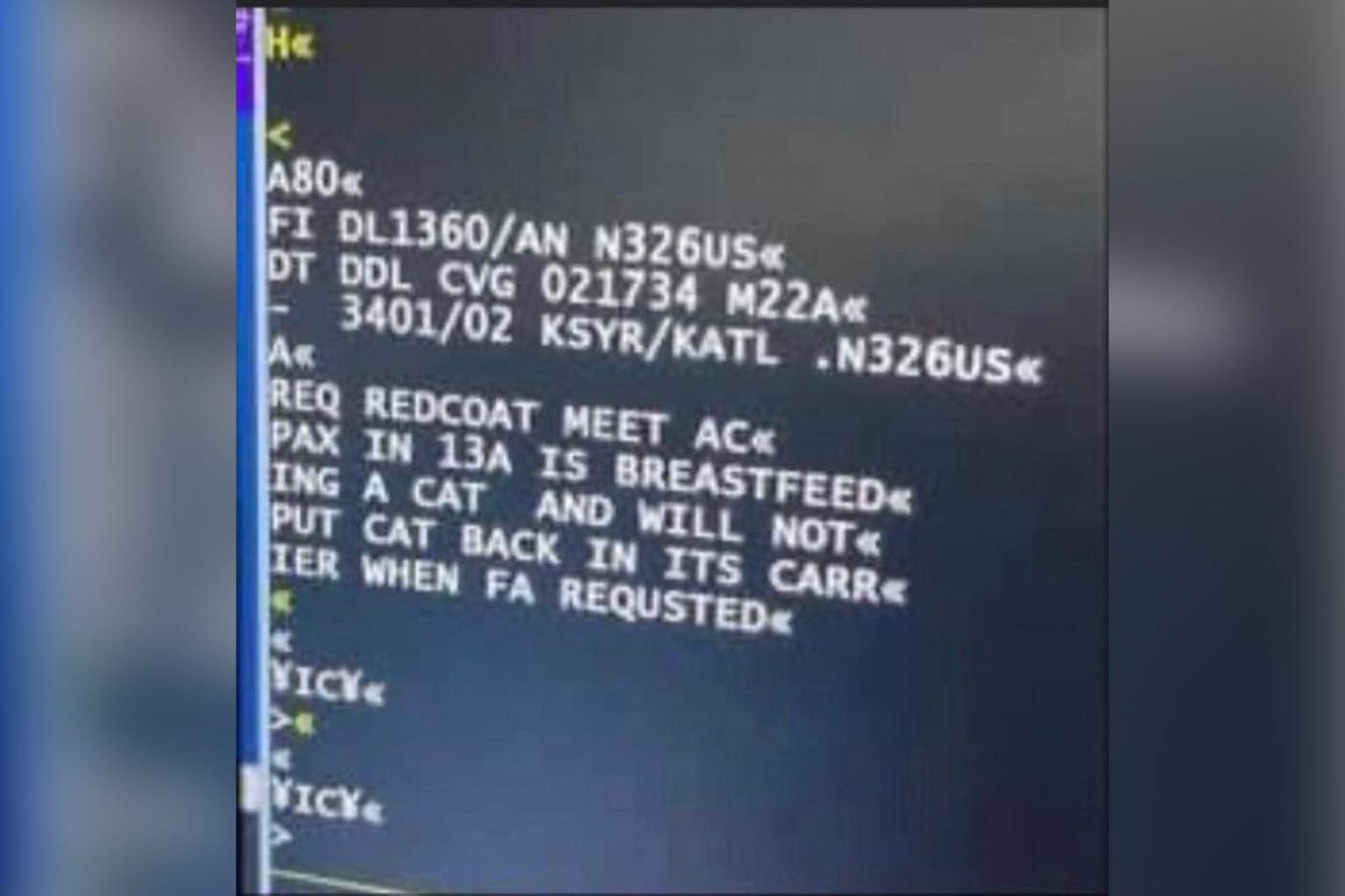 “Req Redcoat Meet AC. Pax in 13A is breastfeeding a cat and will not put cat back in its carrier when FA requested.”

Clearly, the flight crew was not “kitten” around. The “Red Coats” are an elite group of airport customer service experts, specifically trained to handle on-the-stop customer issues. (Although we’re guessing that dealing with breastfed cats isn’t part of the training manual. Until now.)

The Red Coats did indeed meet the passenger in Atlanta and informed her, in no uncertain terms, that breastfeeding cats is not allowed.

“Security met the flight just to tell her that she couldn’t do that again, cause it was weird and gross.”

Delta does have a breastfeeding policy in place. Although they may want to update it to include it only applies to “human” babies.

Delta fully supports a woman’s right to breastfeed on board Delta and Delta Connection aircraft and in Delta facilities. Breast pumps are allowed on board.

The airline also allows small dogs, cats, and household birds to travel in the cabin for a fee. However, according to their rules, they must remain in a small ventilated pet carrier (with door secured) while onboard the aircraft. 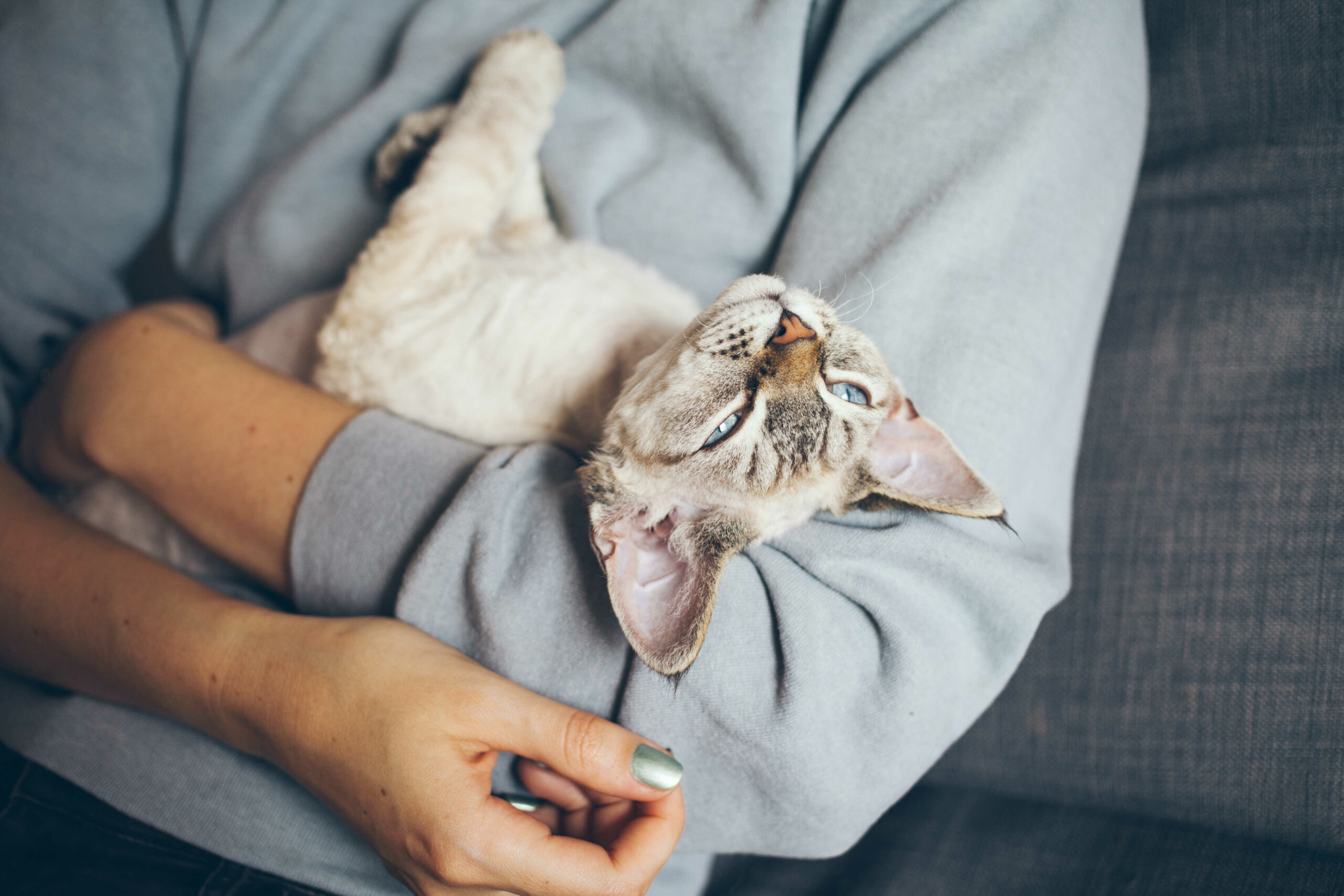 For those of you doubting tom-cats, one Redditor confirmed that the “tail” is true.

I just worked with one of the FAs that was on this flight. Saw pictures of said cat. It’s sadly true.

“Yep I saw the tiktok from the flight attendant … The woman apparently used a small butter packet and rubbed her nipple with it so the cat would lick it. If she’s doing this IN PUBLIC then wtf does she do to this cat at home?????”

We don’t want to know.

In addition, the ACARS message was also shared on Twitter where another person corroborated the story.

For the record, there was no actual milk involved. She was applying butter from a foil packet to her nipple, and was letting her cat lick it off. This apparently is what is necessary to calm her cat.

True story. I know the girl who called the cockpit. pic.twitter.com/0naUAKYcCn

This was in response to a tweet by Author Rick Wilson. He captioned it with “I saw this on Reddit today. It’s an a ACARS in-flight message from the cockpit to the ground.”

He added, “Also, civilization had a good run.”

I saw this on Reddit today. It’s an a ACARS in-flight message from the cockpit to the ground.

People removing their shoes during a flight is off putting enough…but breastfeeding a cat?

The seals of the Apocalypse continue to loosen.

Has anyone tried unplugging humanity & plugging it back in? ?

No, but maybe they should.

Other commenters were just trying to wrap their heads around what.the.fluff.is.happening.

I’m confused thinking about the sharp teeth and sandpaper tongue.

And then there was this comment. Apparently, this is not the first time this has happened. I wish I was kidding.

Evidently, this has been happening for a while. This is from January 2020.https://t.co/zvNODCl8Jy

You mean, there’s more than one? What is happening?

Look, I can’t even with this. All I can say is breastfeeding cats is not a good idea. On a plane or on a train or anywhere. Don’t do it.

As for the airlines, now might be a good time to update their breastfeeding policies. Just sayin’