The body positivity movement has come a long way. More and more companies are embracing diversity and it is reflected in their marketing campaigns, in magazines and social media, and on the fashion runways.

Even Victoria’s Secret jumped aboard the bandwagon recently with the debut of their Love Cloud Collection.

However, it hasn’t always been this way.

Many of us grew up in a time when beautiful meant being thin – impossibly so. Beauty was measured in thigh gaps and cup size, and it has taken its toll.

In a powerful Facebook post, writer Katie Weber of the popular blog, Lovely in the Dark, shares about her struggle with body image and trying to learn to love her body.

And it is achingly relatable.

The post has gone viral with over 20K likes, 2K comments, and 15K shares, and it’s easy to see why. So many women see themselves in the words she bravely and vulnerably penned.

Katie was a teenager in the 1990s. It was a time of JNCO jeans and Doc Martens, scrunchies and dark brown lipstick, chokers and plaid mini-skirts.

It was Friends and My So-Called Life, Justin and Brittany, Alanis Morissette and Nirvana.

The “Rachel” reigned and skinny was king.

In her post, Katie shares a photo of what she looks like now (and can we just say, she’s stunning):

She captions it, in part:

I became a teenager in the 90s.
Where the models were stick thin.
Curves were disgusting.
Boobs were shameful.
And anything over a size 2 a disgrace.

It was the era of “heroin chic” and “model-thin” was in.

Katie goes on to say:

Then the 2000s brought tall glamorous thin Victoria’s Secret models that told me tan, tall, and cup D was desired.

Now at 38, I see how toxic my relationship with my body is.

And honestly, it’s no wonder. For the most formative years of her life, she had been inundated with images of what society deemed beautiful. And what was “beautiful” was nearly impossible to replicate without a heaping side of eating disorder.

And she’s not alone. An entire generation of women was equally impacted.

Our self-love and worth are heavily tied to the number we see on the scale and on the tag of our clothes. It’s reflected in the echoes of the past that scream louder than the whispers of our present.

Even though Katie sees “young women embracing their bodies” of “all the shapes and sizes” and sees models “that look like her,” she says the damage has already been done.

“But the damage has been done.
I hate my body right now.
And have in the past.

I have tried to throw it up, starve it, and exercise it all away. To be like them. The women in the magazines I read in my teens.”

She goes on to explain that medications, age, and pregnancy have all affected her body.

“My clothes don’t fit. I try to shop for replacements but it ends in tears and dispare. I can’t see beauty and femininity. I only see the stick thin image burned into my brain of what beauty looks like.”

Oof. I’ve been there. I’m still there. I can’t count how many times I have tried to buy new clothes, only to leave stores empty-handed. Disgusted by the reflection I see in the mirror. Vowing to lose weight. To drink more water. To exercise more. To do more. So that I can be less.

“I am told I am beautiful. Sexy. Hot. Desired.

I struggle to see it. And believe it.

And I think it’s fair to say, we all want to believe this. When we look at ourselves in the mirror, we want to see ourselves the way others say they see us. But for many of us, the voices in our heads drown out the outside voices.

And the thing is, Katie is all of these things. And yet, what is so easy to see in others, is almost impossible to see in ourselves.

“I don’t know how to work on loving my body.

But I know sharing this is the first step.” 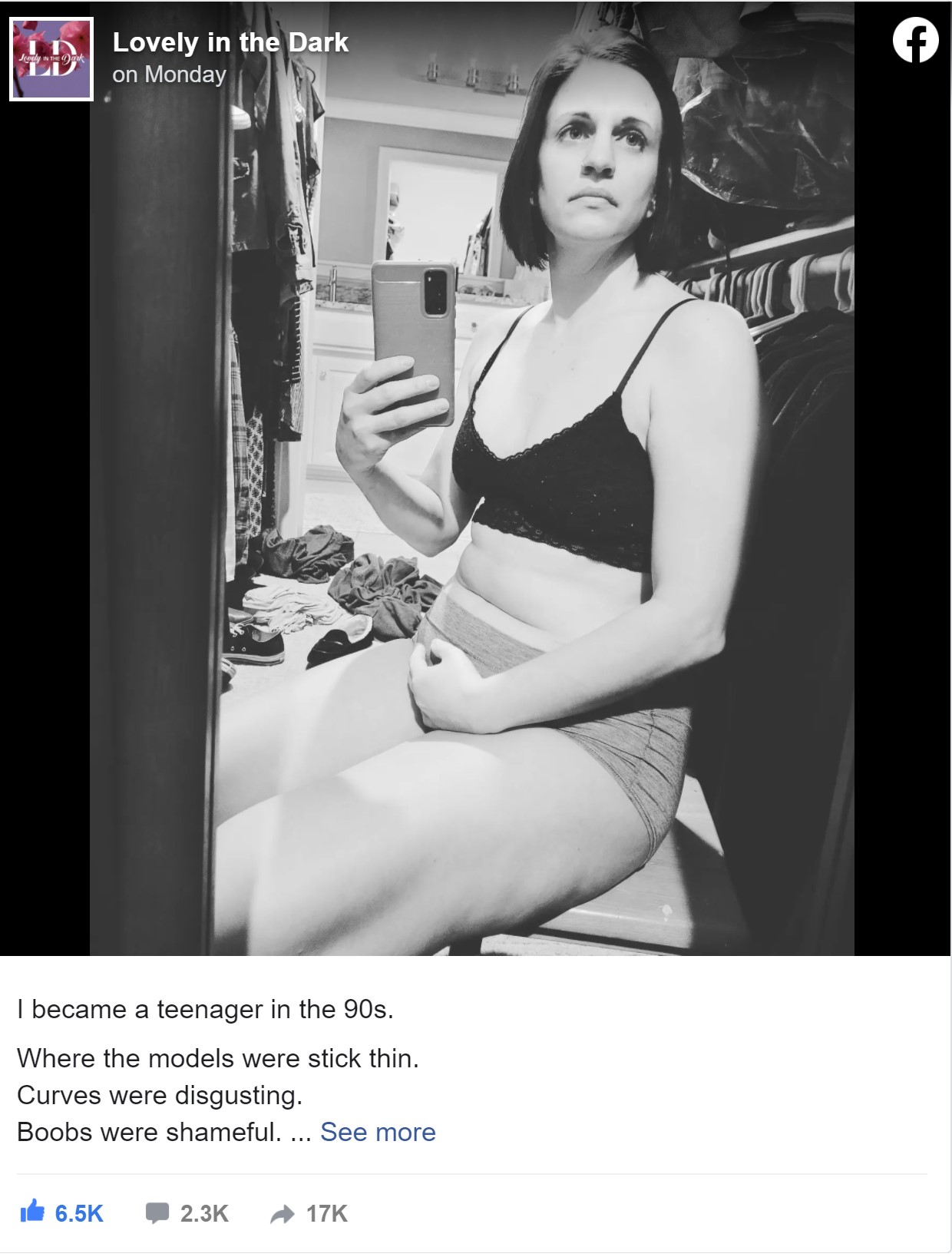 Katie tells Filter Free Parents what prompted her to write the post in the first place, saying:

“I have been struggling the past year with my weight and body image due to meds and a hysterectomy. It was all getting heavier on my heart.

I went to a college basketball game over the weekend and couldn’t believe the young college girls walking around so confident and comfortable in their cropped tees and jeans.

Even at my lowest weight, I couldn’t do that because I had a slight pooch that didn’t look like the models in Cosmo. I woke Monday and said I am going to write about it. I shared with my Fiance and he supported me. Knowing I needed to do it.”

And boy are we glad she did. As are thousands of women who are all putting their hands up and saying, “This is me.”

Women came out in droves to thank her for pulling back the curtain on what they have been struggling with for so long.

For putting into words what they have been afraid to admit out loud.

And it’s not just Millennials. So many other women, from different generations, feel this way too.

As for the response to the post, Katie tells us:

“The overwhelming support and women saying they struggle too has hit me hard. What we are exposed to at young, impressionable ages can be damaging for a lifetime if we don’t work on healing that part of us. So I am starting.”

And so are we.

Our value is not found in a number on a scale. Our beauty is not measured in the inches of our waists.

And neither are our children’s. As far as we have come in trying to rid ourselves and society of this toxic body image, the reality is, it’s still not far enough.

But at least it’s a start.